From Wikipedia, the free encyclopedia
Ordered list of whole numbers 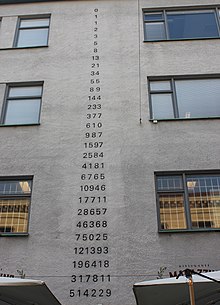 Beginning of the Fibonacci sequence on a building in Gothenburg

In mathematics, an integer sequence is a sequence (i.e., an ordered list) of integers.

An integer sequence may be specified explicitly by giving a formula for its nth term, or implicitly by giving a relationship between its terms. For example, the sequence 0, 1, 1, 2, 3, 5, 8, 13, ... (the Fibonacci sequence) is formed by starting with 0 and 1 and then adding any two consecutive terms to obtain the next one: an implicit description. The sequence 0, 3, 8, 15, ... is formed according to the formula n2 − 1 for the nth term: an explicit definition.

Alternatively, an integer sequence may be defined by a property which members of the sequence possess and other integers do not possess. For example, we can determine whether a given integer is a perfect number, even though we do not have a formula for the nth perfect number.

Integer sequences that have their own name include:

Although some integer sequences have definitions, there is no systematic way to define what it means for an integer sequence to be definable in the universe or in any absolute (model independent) sense.