From Wikipedia
https://en.wikipedia.org/wiki/Incenter
The center of the inscribed circle of a triangle 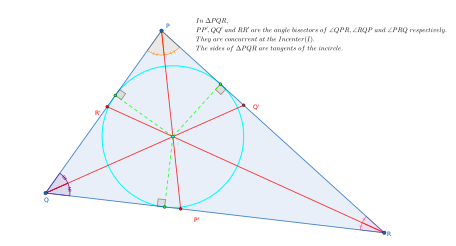 The point of intersection of angle bisectors of the 3 angles of triangle ABC is the incenter ( denoted by I). The incircle (whose center is I) touches each side of the triangle.

Together with the centroid, circumcenter, and orthocenter, it is one of the four triangle centers known to the ancient Greeks, and the only one that does not in general lie on the Euler line. It is the first listed center, X(1), in Clark Kimberling's Encyclopedia of Triangle Centers, and the identity element of the multiplicative group of triangle centers. [1] [2]

For polygons with more than three sides, the incenter only exists for tangential polygons—those that have an incircle that is tangent to each side of the polygon. In this case the incenter is the center of this circle and is equally distant from all sides.

It is a theorem in Euclidean geometry that the three interior angle bisectors of a triangle meet in a single point. In Euclid's Elements, Proposition 4 of Book IV proves that this point is also the center of the inscribed circle of the triangle. The incircle itself may be constructed by dropping a perpendicular from the incenter to one of the sides of the triangle and drawing a circle with that segment as its radius. [3]

The incenter lies at equal distances from the three line segments forming the sides of the triangle, and also from the three lines containing those segments. It is the only point equally distant from the line segments, but there are three more points equally distant from the lines, the excenters, which form the centers of the excircles of the given triangle. The incenter and excenters together form an orthocentric system. [4]

The medial axis of a polygon is the set of points whose nearest neighbor on the polygon is not unique: these points are equidistant from two or more sides of the polygon. One method for computing medial axes is using the grassfire transform, in which one forms a continuous sequence of offset curves, each at some fixed distance from the polygon; the medial axis is traced out by the vertices of these curves. In the case of a triangle, the medial axis consists of three segments of the angle bisectors, connecting the vertices of the triangle to the incenter, which is the unique point on the innermost offset curve. [5] The straight skeleton, defined in a similar way from a different type of offset curve, coincides with the medial axis for convex polygons and so also has its junction at the incenter. [6]

Let the bisection of

, and the bisection of

Then we have to prove that

is the bisection of

is the bisection of

Relation to triangle sides and vertices

The collection of triangle centers may be given the structure of a group under coordinatewise multiplication of trilinear coordinates; in this group, the incenter forms the identity element. [2]

are the lengths of the sides of the triangle, or equivalently (using the law of sines) by

are the angles at the three vertices.

, and the sides opposite these vertices have corresponding lengths

, then the incenter is at

Denoting the incenter of triangle ABC as I, the distances from the incenter to the vertices combined with the lengths of the triangle sides obey the equation [7]

where R and r are the triangle's circumradius and inradius respectively.

The distance from the incenter to the centroid is less than one third the length of the longest median of the triangle. [9]

By Euler's theorem in geometry, the squared distance from the incenter I to the circumcenter O is given by [10] [11]

Relative distances from an angle bisector

Let X be a variable point on the internal angle bisector of A. Then X = I (the incenter) maximizes or minimizes the ratio