From Wikipedia
https://en.wikipedia.org/wiki/Icosahedron
Polyhedron with 20 faces 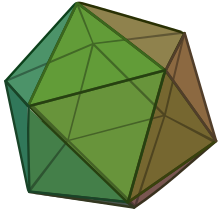 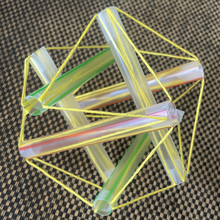 There are infinitely many non- similar shapes of icosahedra, some of them being more symmetrical than others. The best known is the ( convex, non- stellated) regular icosahedron—one of the Platonic solids—whose faces are 20 equilateral triangles.

There are two objects, one convex and one nonconvex, that can both be called regular icosahedra. Each has 30 edges and 20 equilateral triangle faces with five meeting at each of its twelve vertices. Both have icosahedral symmetry. The term "regular icosahedron" generally refers to the convex variety, while the nonconvex form is called a great icosahedron.

The convex regular icosahedron is usually referred to simply as the regular icosahedron, one of the five regular Platonic solids, and is represented by its Schläfli symbol {3, 5}, containing 20 triangular faces, with 5 faces meeting around each vertex.

Its dual polyhedron is the regular dodecahedron {5, 3} having three regular pentagonal faces around each vertex. 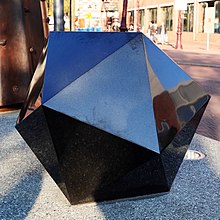 A detail of Spinoza monument in Amsterdam

The great icosahedron is one of the four regular star Kepler-Poinsot polyhedra. Its Schläfli symbol is {3, 5/2}. Like the convex form, it also has 20 equilateral triangle faces, but its vertex figure is a pentagram rather than a pentagon, leading to geometrically intersecting faces. The intersections of the triangles do not represent new edges.

Its dual polyhedron is the great stellated dodecahedron {5/2, 3}, having three regular star pentagonal faces around each vertex.

Stellation is the process of extending the faces or edges of a polyhedron until they meet to form a new polyhedron. It is done symmetrically so that the resulting figure retains the overall symmetry of the parent figure.

In their book The Fifty-Nine Icosahedra, Coxeter et al. enumerated 58 such stellations of the regular icosahedron.

Of these, many have a single face in each of the 20 face planes and so are also icosahedra. The great icosahedron is among them.

Other stellations have more than one face in each plane or form compounds of simpler polyhedra. These are not strictly icosahedra, although they are often referred to as such.

A regular icosahedron can be distorted or marked up as a lower pyritohedral symmetry, [2] and is called a snub octahedron, snub tetratetrahedron, snub tetrahedron, and pseudo-icosahedron. This can be seen as an alternated truncated octahedron. If all the triangles are equilateral, the symmetry can also be distinguished by colouring the 8 and 12 triangle sets differently.

respectively, each representing the lower symmetry to the regular icosahedron

Construction from the vertices of a truncated octahedron, showing internal rectangles.

This construction is called a snub tetrahedron in its regular icosahedron form, generated by the same operations carried out starting with the vector (ϕ, 1, 0), where ϕ is the golden ratio. [2] 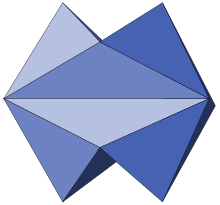 In Jessen's icosahedron, sometimes called Jessen's orthogonal icosahedron, the 12 isosceles faces are arranged differently so that the figure is non-convex and has right dihedral angles.

It is scissors congruent to a cube, meaning that it can be sliced into smaller polyhedral pieces that can be rearranged to form a solid cube. 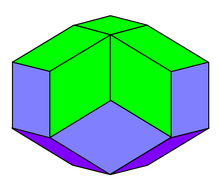 Common icosahedra with pyramid and prism symmetries include: