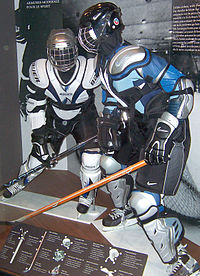 A set of full hockey equipment, minus jersey and socks at the Royal Ontario Museum, 2006

In ice hockey, players use specialized equipment both to facilitate the play of the game and for protection as this is a sport where injuries are common, therefore, all players are encouraged to protect their bodies from bruises and severe fractures. [1]

The hard surfaces of the ice and boards, pucks being shot at high speed, and other players maneuvering (and often intentionally colliding, also known as "checking") pose multiple safety hazards. Besides ice skates and sticks, hockey players are usually equipped with an array of safety gear to lessen their risk of serious injury. This usually includes a helmet, shoulder pads/chest protector, elbow pads, mouth guard, protective gloves, heavily padded shorts, a 'jock' athletic protector, shin pads and a neck guard.

Goaltenders wear masks and much bulkier, specialized equipment designed to protect them from many direct hits from the puck. The hockey skate is usually made of a thick layer of leather or nylon to protect the feet and lower legs of the player from injury. Its blade is rounded on both ends to allow for easy maneuvering. Goaltenders' skates, however, have blades that are lower to the ice and more square than round; this is an advantage to the goalies, for whom lateral mobility and stability are more important than quick turns and speed.

The first skates had simple metal blades tied to regular shoes. The sticks were thin pieces of wood until the 1930s. In 1897, G.H. Merritt introduced simple goalie pads by wearing the wicket-keeper's pads. All players played in simple leather gloves, until a Detroit goalie introduced the trapper and blocker in 1948, by experimenting with a rectangular piece of leather, and a baseball catcher's glove. Jacques Plante was the first regular user of the goalie mask; Clint Benedict used a crude leather version in 1928 to protect a broken nose. The goalie mask evolved to Vladislav Tretiak design, the first helmet, and cage combo. Considered primitive by today's standard, that sort of mask is used by Chris Osgood. The other helmet and cage combo, used last by Dominik Hasek and Dan Cloutier is often questioned, citing safety concerns. The most recognized goalie mask today resembles a highly fortified motorcycle helmet with a cage attached, however, the construction is very different, being a true mask rather than a helmet.

Goalies are allowed special variations on equipment, both to increase their chance of stopping pucks and for extra protection. They offer more protection from frontal impacts, while generally providing lesser or no protection to the goalie's back. This is because a goalie should always face the action and a hit on a non-padded area is generally a mistake on the part of the goalie. Virtually all of the following equipment is required in any league:

Normally the stick is held in the right hand with the blocker, and the catch glove is on the left. However, "full right" goalies reverse this, holding a right-hand curve stick in the left hand and catching with the right. This is largely personal preference, depending mostly on which hand the goalie is most comfortable catching with. The stick blade may be flat or curved to assist in playing the puck, depending on personal preference and stick handling style; a flat blade is generally better for stopping the puck, while a more curved blade allows for easier "lifting" of shots off the blade to the forwards/center. The shaft of the stick blade may be slightly curved to assist in picking it up off the ice when dropped.

Youth and college hockey players are required to wear a mask made from metal wire or transparent plastic attached to their helmet that protects their face during play. Professional and adult players may instead wear a visor that protects only their eyes, or no mask at all; however, some provincial and state legislation require full facial protection at all non-professional levels. Rules regarding visors and face masks are mildly controversial at professional levels. Some players feel that they interfere with their vision or breathing, or encourage carrying of the stick up high in a reckless manner, while others believe that they are a necessary safety precaution.

In fact, the adoption of safety equipment has been a gradual one at the North American professional level, where even helmets were not mandatory until the 1980s. The famous goalie, Jacques Plante, had to suffer an easy blow to the face with a flying puck in 1959 before he could persuade his coach to allow him to wear a protective goalie mask in play.