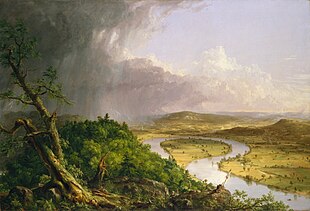 The Hudson River School was a mid-19th century American art movement embodied by a group of landscape painters whose aesthetic vision was influenced by Romanticism. The paintings typically depict the Hudson River Valley and the surrounding area, including the Catskill, Adirondack, and White Mountains.

Works by second generation artists expanded to include other locales in New England, the Maritimes, the American West, and South America.

The term Hudson River School is thought to have been coined by the New York Tribune art critic Clarence Cook or by landscape painter Homer Dodge Martin. [1] It was initially used disparagingly, as the style had gone out of favor after the plein-air Barbizon School had come into vogue among American patrons and collectors.

Hudson River School paintings reflect three themes of America in the 19th century: discovery, exploration, and settlement. [2] They also depict the American landscape as a pastoral setting, where human beings and nature coexist peacefully. Hudson River School landscapes are characterized by their realistic, detailed, and sometimes idealized portrayal of nature, often juxtaposing peaceful agriculture and the remaining wilderness which was fast disappearing from the Hudson Valley just as it was coming to be appreciated for its qualities of ruggedness and sublimity. [3] In general, Hudson River School artists believed that nature in the form of the American landscape was a reflection of God, [4] though they varied in the depth of their religious conviction. They were inspired by European masters such as Claude Lorrain, John Constable, and J. M. W. Turner. Several painters were members of the Düsseldorf School of painting, others were educated by German Paul Weber. [5]

Thomas Cole is generally acknowledged as the founder of the School. [6] He took a steamship up the Hudson in the autumn of 1825, stopping first at West Point then at Catskill landing. He hiked west high into the eastern Catskill Mountains of New York to paint the first landscapes of the area. The first review of his work appeared in the New York Evening Post on November 22, 1825. [7] Cole was from England and the brilliant autumn colors in the American landscape inspired him. [6] His close friend Asher Brown Durand became a prominent figure in the school. [8] A prominent element of the Hudson River School was its themes of nationalism, nature, and property. Adherents of the movement also tended to be suspicious of the economic and technological development of the age. [9] 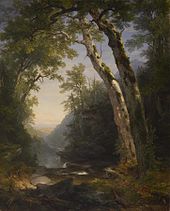 The second generation of Hudson River School artists emerged after Cole's premature death in 1848; its members included Cole's prize pupil Frederic Edwin Church, John Frederick Kensett, and Sanford Robinson Gifford. Works by artists of this second generation are often described as examples of Luminism. Kensett, Gifford, and Church were also among the founders of the Metropolitan Museum of Art in New York City. [10]

Most of the finest works of the second generation were painted between 1855 and 1875. Artists such as Frederic Edwin Church and Albert Bierstadt were celebrities during that time. They were both influenced by the Düsseldorf school of painting, and Bierstadt had studied in that city for several years. Thousands of people would pay 25 cents per person to view paintings such as Niagara [11] and The Icebergs. [12] The epic size of these landscapes was unexampled in earlier American painting and reminded Americans of the vast, untamed, and magnificent wilderness areas in their country. This was the period of settlement in the American West, preservation of national parks, and establishment of green city parks.

Several women were associated with the Hudson River School. Susie M. Barstow was an avid mountain climber who painted the mountain scenery of the Catskills and the White Mountains. Eliza Pratt Greatorex was an Irish-born painter who was the second woman elected to the National Academy of Design. Julie Hart Beers led sketching expeditions in the Hudson Valley region before moving to a New York City art studio with her daughters. Harriet Cany Peale studied with Rembrandt Peale and Mary Blood Mellen was a student and collaborator with Fitz Henry Lane. [13] [14]

Hudson River School art has had minor periods of resurgence in popularity. The school gained interest after World War I, probably due to nationalist attitudes. Interest declined until the 1960s, and the regrowth of the Hudson Valley[ vague] has spurred further interest in the movement. [15] Historic house museums and other sites dedicated to the Hudson River School include Olana State Historic Site in Hudson, New York, the Thomas Cole National Historic Site in the town of Catskill, the Newington-Cropsey Foundation's historic house museum, art gallery, and research library in Hastings-on-Hudson, New York, and the John D. Barrow Art Gallery in the village of Skaneateles, New York.

One of the largest collections of paintings by artists of the Hudson River School is at the Wadsworth Atheneum in Hartford, Connecticut. Some of the most notable works in the Atheneum's collection are 13 landscapes by Thomas Cole and 11 by Hartford native Frederic Edwin Church. They were personal friends of the museum's founder, Daniel Wadsworth.

The Newington-Cropsey Foundation, in their Gallery of Art Building, maintains a research library of Hudson River School art and painters, open to the public by reservation. [17]