Hubert Lederer Dreyfus ( /ˈdraɪfəs/; October 15, 1929 – April 22, 2017) was an American philosopher and professor of philosophy at the University of California, Berkeley. His main interests included phenomenology, existentialism and the philosophy of both psychology and literature, as well as the philosophical implications of artificial intelligence. He was widely known for his exegesis of Martin Heidegger, which critics labeled "Dreydegger". [4]

Dreyfus was featured in Tao Ruspoli's film Being in the World (2010), [5] and was among the philosophers interviewed by Bryan Magee for the BBC Television series The Great Philosophers (1987). [6]

The Futurama character Professor Hubert Farnsworth is partly named after him, writer Eric Kaplan having been a former student. [1]

From 1960, first as an instructor, then as an assistant and then associate professor, Dreyfus taught philosophy at the Massachusetts Institute of Technology (MIT). [8] In 1964, with his dissertation Husserl's Phenomenology of Perception, he obtained his PhD from Harvard. [10] [15] (Due to his knowledge of Husserl, Dagfinn Føllesdal sat on the thesis committee but he has asserted that Dreyfus "was not really my student.") [16] That same year, his co-translation (with his first wife) of Sense and Non-Sense by Maurice Merleau-Ponty was published. [7]

Also in 1964, and whilst still at MIT, he was employed as a consultant by the RAND Corporation to review the work of Allen Newell and Herbert A. Simon in the field of artificial intelligence (AI). [9] This resulted in the publication, in 1965, of the "famously combative" Alchemy and Artificial Intelligence, which proved to be the first of a series of papers and books attacking the AI field's claims and assumptions. [17] [18] The first edition of What Computers Can't Do would follow in 1972, and this critique of AI (which has been translated into at least ten languages) would establish Dreyfus's public reputation. [9] However, as the editors of his Festschrift noted: "the study and interpretation of 'continental' philosophers... came first in the order of his philosophical interests and influences." [9] 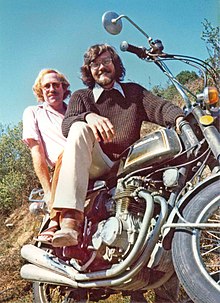 Dreyfus (left) outside his Berkeley home in 1976.

In 1968, although he had been granted tenure, Dreyfus left MIT and became an associate professor of philosophy at the University of California, Berkeley [8] [10] (winning, that same year, the Harbison Prize for Outstanding Teaching). [1] In 1972 he was promoted to full professor. [8] [10] Though Dreyfus retired from his chair in 1994, he continued as professor of philosophy in the Graduate School (and held, from 1999, a joint appointment in the rhetoric department). [1] And he continued to teach philosophy at UC Berkeley until his last class in December 2016. [1]

Dreyfus was elected a fellow of the American Academy of Arts and Sciences in 2001. [19] He was also awarded an honorary doctorate for "his brilliant and highly influential work in the field of artificial intelligence" and his interpretation of twentieth century continental philosophy by Erasmus University. [1]

His younger brother and sometimes collaborator, Stuart Dreyfus, is a professor emeritus of industrial engineering and operations research at the University of California, Berkeley.

Dreyfus' critique of artificial intelligence (AI) concerns what he considers to be the four primary assumptions of AI research. The first two assumptions are what he calls the "biological" and "psychological" assumptions. The biological assumption is that the brain is analogous to computer hardware and the mind is analogous to computer software. The psychological assumption is that the mind works by performing discrete computations (in the form of algorithmic rules) on discrete representations or symbols.

On the basis of these two assumptions, workers in the field claim that cognition is the manipulation of internal symbols by internal rules, and that, therefore, human behaviour is, to a large extent, context free (see contextualism). Therefore, a truly scientific psychology is possible, which will detail the 'internal' rules of the human mind, in the same way the laws of physics detail the 'external' laws of the physical world. However, it is this key assumption that Dreyfus denies. In other words, he argues that we cannot now (and never will be able to) understand our own behavior in the same way as we understand objects in, for example, physics or chemistry: that is, by considering ourselves as things whose behaviour can be predicted via 'objective', context free scientific laws. According to Dreyfus, a context-free psychology is a contradiction in terms.

Dreyfus's arguments against this position are taken from the phenomenological and hermeneutical tradition (especially the work of Martin Heidegger). Heidegger argued that, contrary to the cognitivist views (on which AI has been based), our being is in fact highly context-bound, which is why the two context-free assumptions are false. Dreyfus doesn't deny that we can choose to see human (or any) activity as being 'law-governed', in the same way that we can choose to see reality as consisting of indivisible atomic facts... if we wish. But it is a huge leap from that to state that because we want to or can see things in this way that it is therefore an objective fact that they are the case. In fact, Dreyfus argues that they are not (necessarily) the case, and that, therefore, any research program that assumes they are will quickly run into profound theoretical and practical problems. Therefore, the current efforts of workers in the field are doomed to failure.

Dreyfus argues that to get a device or devices with human-like intelligence would require them to have a human-like being-in-the-world and to have bodies more or less like ours, and social acculturation (i.e. a society) more or less like ours. (This view is shared by psychologists in the embodied psychology (Lakoff and Johnson 1999) and distributed cognition traditions. His opinions are similar to those of robotics researchers such as Rodney Brooks as well as researchers in the field of artificial life.)

Daniel Crevier writes: "time has proven the accuracy and perceptiveness of some of Dreyfus's comments. Had he formulated them less aggressively, constructive actions they suggested might have been taken much earlier." [20]

When UC Berkeley and Apple began making a selected number of lecture classes freely available to the public as podcasts beginning around 2006, a recording of Dreyfus teaching a course called "Man, God, and Society in Western Literature – From Gods to God and Back" rose to the 58th most popular webcast on iTunes. [21] These webcasts have attracted the attention of many, including non-academics, to Dreyfus and his subject area. [22]