From Wikipedia, the free encyclopedia
Volcanic regions that are hotter than the surrounding mantle 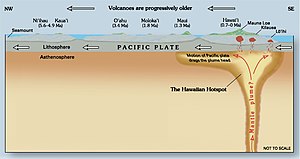 Diagram showing a cross section through Earth at the Hawaii hotspot. Magma originating in the mantle rises into the asthenosphere and lithosphere. A chain of volcanoes is created as the lithosphere moves over the source of magma.

In geology, hotspots (or hot spots) are volcanic locales thought to be fed by underlying mantle that is anomalously hot compared with the surrounding mantle. [1] Examples include the Hawaii, Iceland, and Yellowstone hotspots. A hotspot's position on the Earth's surface is independent of tectonic plate boundaries, and so hotspots may create a chain of volcanoes as the plates move above them.

There are two hypotheses that attempt to explain their origins. One suggests that hotspots are due to mantle plumes that rise as thermal diapirs from the core–mantle boundary. [2] The alternative plate theory is that the mantle source beneath a hotspot is not anomalously hot, rather the crust above is unusually weak or thin, so that lithospheric extension permits the passive rising of melt from shallow depths. [3] [4]

Schematic diagram showing the physical processes inside the Earth that lead to the generation of magma. Partial melting begins above the fusion point.

The origins of the concept of hotspots lie in the work of J. Tuzo Wilson, who postulated in 1963 that the formation of the Hawaiian Islands resulted from the slow movement of a tectonic plate across a hot region beneath the surface. [5] It was later postulated that hotspots are fed by narrow streams of hot mantle rising from the Earth's core–mantle boundary in a structure called a mantle plume. [6] Whether or not such mantle plumes exist is the subject of a major controversy in Earth science. [4] [7]

At any place where volcanism is not linked to a constructive or destructive plate margin, the concept of a hotspot has been used to explain its origin. In a review article by Courtillot et al. [8] listing possible hotspots, distinction is made between primary hotspots coming from deep within the mantle (possibly originating from the core/mantle boundary), creating large volcanic provinces with linear tracks (Easter Island, Iceland, Hawaii, Afar, Louisville, Reunion, Tristan confirmed, Galapagos, Kerguelen and Marquersas likely) and secondary hotspots derived from mantle plumes (Samoa, Tahiti, Cook, Pitcairn, Caroline, MacDonald confirmed, up to about 20 possible) at the upper/lower mantle boundary that do not form large volcanic provinces but form island chains. Other potential hotspots are the result of shallow mantle material surfacing in areas of lithospheric break-up caused by tension (and are thus a very different type of volcanism).

Estimates for the number of hotspots postulated to be fed by mantle plumes have ranged from about 20 to several thousand,[ citation needed] with most geologists considering a few tens to exist. Hawaii, Réunion, Yellowstone, Galápagos, and Iceland are some of the most active volcanic regions to which the hypothesis is applied.

Most hotspot volcanoes are basaltic (e.g., Hawaii, Tahiti). As a result, they are less explosive than subduction zone volcanoes, in which water is trapped under the overriding plate. Where hotspots occur in continental regions, basaltic magma rises through the continental crust, which melts to form rhyolites. These rhyolites can form violent eruptions. [9] [10] For example, the Yellowstone Caldera was formed by some of the most powerful volcanic explosions in geologic history. However, when the rhyolite is completely erupted, it may be followed by eruptions of basaltic magma rising through the same lithospheric fissures (cracks in the lithosphere). An example of this activity is the Ilgachuz Range in British Columbia, which was created by an early complex series of trachyte and rhyolite eruptions, and late extrusion of a sequence of basaltic lava flows. [11]

The hotspot hypothesis is now closely linked to the mantle plume hypothesis. [12]

Hotspot volcanoes are considered to have a fundamentally different origin from island arc volcanoes. The latter form over subduction zones, at converging plate boundaries. When one oceanic plate meets another, the denser plate is forced downward into a deep ocean trench. This plate, as it is subducted, releases water into the base of the over-riding plate, and this water mixes with the rock, thus changing its composition causing some rock to melt and rise. It is this that fuels a chain of volcanoes, such as the Aleutian Islands, near Alaska.

Over millions of years, the Pacific Plate has moved over the Hawaii hotspot, creating a trail of underwater mountains that stretches across the Pacific 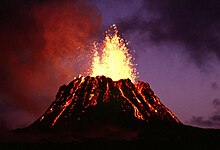 Kilauea is the most active shield volcano in the world. The volcano erupted from 1983 to 2018 and is part of the Hawaiian–Emperor seamount chain.

Mauna Loa is a large shield volcano. Its last eruption was in 2022 and it is part of the Hawaiian–Emperor seamount chain.

Axial Seamount is the youngest seamount of the Cobb–Eickelberg Seamount chain. Its last eruption was in 2015. 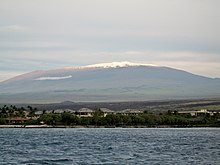 Mauna Kea is the tallest volcano in the Hawaiian–Emperor seamount chain. Many cinder cones have been emplaced around its summit.

Hualalai is a massive shield volcano in the Hawaiian–Emperor seamount chain. Its last eruption was in 1801.

The joint mantle plume/hotspot hypothesis envisages the feeder structures to be fixed relative to one another, with the continents and seafloor drifting overhead. The hypothesis thus predicts that time-progressive chains of volcanoes are developed on the surface. Examples are Yellowstone, which lies at the end of a chain of extinct calderas, which become progressively older to the west. Another example is the Hawaiian archipelago, where islands become progressively older and more deeply eroded to the northwest.

Geologists have tried to use hotspot volcanic chains to track the movement of the Earth's tectonic plates. This effort has been vexed by the lack of very long chains, by the fact that many are not time-progressive (e.g. the Galápagos) and by the fact that hotspots do not appear to be fixed relative to one another (e.g. Hawaii and Iceland). [13]

In 2020, Wei et al. used seismic tomography to detect the oceanic plateau, formed about 100 million years ago by the hypothesized mantle plume head of the Hawaii-Emperor seamount chain, now subducted to a depth of 800 km under eastern Siberia. [14]

An example of mantle plume locations suggested by one recent group. [15] Figure from Foulger (2010). [4] 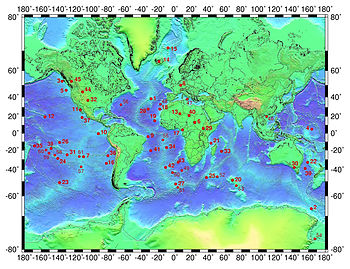 Distribution of hotspots in the list to the left, with the numbers corresponding to those in the list. The Afar hotspot (29) is misplaced.

Over millions of years, the Pacific Plate has moved over the Bowie hotspot, creating the Kodiak-Bowie Seamount chain in the Gulf of Alaska

The Wikibook Historical Geology has a page on the topic of: Hotspots
Retrieved from " https://en.wikipedia.org/?title=Hotspot_(geology)&oldid=1124876365"
Categories:
Hidden categories: