From Wikipedia, the free encyclopedia
(Redirected from Honshū)
Largest island of Japan

listen); lit. "main province"), historically called Hondo (本土, lit. "mainland"), is the largest and most populous island of Japan. [3] [4] It is located south of Hokkaidō across the Tsugaru Strait, north of Shikoku across the Inland Sea, and northeast of Kyūshū across the Kanmon Straits. The island separates the Sea of Japan, which lies to its north and west, from the North Pacific Ocean to the south and east. It is the seventh-largest island in the world, and the second-most populous after the Indonesian island of Java. [5] [6] [7]

Honshu had a population of 104 million as of 2017 [update], constituting 81.3% of the entire population of Japan, [8] and is mostly concentrated in the coastal areas and plains. Approximately 30% of the total population resides in the Greater Tokyo Area on the Kantō Plain. As the historical center of Japanese cultural and political power, [9] the island includes several past Japanese capitals, including Kyōto, Nara and Kamakura. Much of the island's southern shore forms part of the Taiheiyō Belt, a megalopolis that spans several of the Japanese islands. [9] Honshu contains Japan's highest mountain, Mount Fuji, and its largest lake, Lake Biwa. [10]

Most of Japan's industry is located in a belt running along Honshu's southern coast, from Tokyo to Nagoya, Kyōto, Osaka, Kobe, and Hiroshima; [9] by contrast, the economy along the northwestern Sea of Japan coast is largely based on fishing and agriculture. [11] The island is linked to the other three major Japanese islands by a number of bridges and tunnels. The island primarily shares two climates, with Northern Honshu being mainly humid continental climate while the south has a humid subtropical climate. [12]

The name of the island, Honshū (本州), directly translates to "main province" in English.

The island of Honshu would become the target of devastating air raids as part of the Pacific War of World War II. The first air raid that would strike the island and the Home Islands would be the Doolittle Raid. With the introduction of the Boeing B-29 Superfortress, the firebombing of Tokyo would culminate in Operation Meetinghouse, the most destructive air raid in human history, leading to 16 square miles (41 km2; 10,000 acres) of central Tokyo being destroyed, leaving an estimated 100,000 civilians dead, and over one million homeless. [14] The war would culminate in the atomic bombing of Hiroshima shortly before Japan's surrender and signing of the Japanese Instrument of Surrender on September 2, 1945, on board USS Missouri (BB-63) in Tokyo Bay. 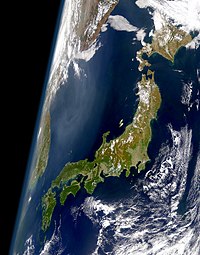 Japan as seen from a satellite. Honshu is the largest, middle island.

Mountainous and volcanic, Honshu experiences frequent earthquakes (the Great Kantō earthquake heavily damaged Tokyo in September 1923, and the earthquake of March 2011 moved the northeastern part of the island by varying amounts of as much as 5.3 m (17 ft) [15] [16] while causing devastating tsunamis). The highest peak is the active volcano Mount Fuji at 3,776 m (12,388 ft), which makes Honshu the world's 7th highest island. There are many rivers, including the Shinano River, Japan's longest. The Japanese Alps span the width of Honshu, from the 'Sea of Japan' coast to the Pacific shore. The climate is generally humid subtropical in western Japan and humid continental in the north.

Honshu has a total population of 104 million people, according to a 2017 estimate, 81.3% of the entire population of Japan. [8] The largest city is Tokyo (population: 37,339,804), [17] the capital of Japan and part of the Greater Tokyo Area, the most populous metropolitan area in the world.

These are notable flora and fauna of Honshu.

Being on the Ring of Fire, the island of Honshu is seismically active, and is home to 40 active volcanoes.

In 2011, an earthquake of magnitude 9.0–9.1 occurred off the coast of Honshu, generating tsunami waves up to 40.5 meters (133 ft) high and killing 19,747. It was the most powerful earthquake ever recorded in Japan, and the fourth most powerful earthquake in the world since modern record-keeping began in 1900. [19] [20] [21] The tsunami subsequently led to the meltdown of 3 nuclear reactors at the Fukushima Daiichi Nuclear Power Plant, leading to the Fukushima nuclear disaster. 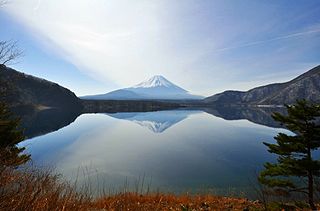 Fruit, vegetables, grains, rice and cotton make up the main produce grown in Honshu. [23] The Tohoku region, spanning the north-eastern part of the island, is notable for its rice production, with 65% of cultivated land being rice paddy fields – almost a quarter of all paddy fields in Japan. [24] Chiba Prefecture is famous for its peanuts, also being the largest producer in Japan. [25] Rare species of the lichen genus Menegazzia are found only in Honshu. [26]

Most of Japan's tea and silk is from Honshu. [23] Japan's three largest industrial regions are all located on Honshu: the Keihin region, the Hanshin Industrial Region, and the Chūkyō Industrial Area.

Honshu is home to a large portion [27] of Japan's minimal mineral reserves [28] along housing small deposits of oil and coal. Several coal deposits are also located in the northern part of the island, [29] concentrated in Fukushima Prefecture and Niigata Prefecture, though Honshu's coal production is negligible in comparison to Hokkaido and Kyushu. [30] Most of Japan's oil reserves are also located in northern Honshu, along the west coast, spanning Niigata, Yamagata and Akita Prefectures. [31]

In terms of mineral resources, Honshu houses the majority of Japan's copper, lead, zinc and chromite. Smaller deposits of gold, silver, arsenic, sulphur and pyrite are also scattered across the island. [32]

Mt. Fuji and the Tokaido Shinkansen

The island is divided into five nominal regions and contains 34 prefectures, including metropolitan Tokyo. Administratively, some smaller islands are included within these prefectures, notably including the Ogasawara Islands, Sado Island, Izu Ōshima, and Awaji Island.

The regions and their prefectures are: