From Wikipedia, the free encyclopedia
Tribe of mammals
Not to be confused with Hominoidea, Hominidae, Homininae, Hominina, or Homo.
For an explanation of very similar terms, see Hominoidea.

The Hominini form a taxonomic tribe of the subfamily Homininae ("hominines"). Hominini includes the extant genera Homo (humans) and Pan (chimpanzees and bonobos) and in standard usage excludes the genus Gorilla (gorillas).

The term was originally introduced by Camille Arambourg (1948). Arambourg combined the categories of Hominina and Simiina due to Gray (1825) into his new subtribe.

The taxonomic classification of hominoids

Traditionally, chimpanzees, gorillas and orangutans were grouped together as pongids. Since Gray's classification, evidence has accumulated from genetic phylogeny confirming that humans, chimpanzees, and gorillas are more closely related to each other than to the orangutan. [3] The former pongids were reassigned to the subfamily Hominidae ("great apes"), which already included humans, [3] but the details of this reassignment remain contested; within Hominini, not every source excludes gorillas, and not every source includes chimpanzees.

Humans are the only extant species in the Australopithecine branch (subtribe), which also contains many extinct close relatives of humans.

Concerning membership, when Hominini is taken to exclude Pan, Panini ("panins") [4] may refer to the tribe containing Pan as its only genus. [5] [6] Or perhaps place Pan with other dryopithecine genera, making the whole tribe or subtribe of Panini or Panina together. Minority dissenting nomenclatures include Gorilla in Hominini and Pan in Homo (Goodman et al. 1998), or both Pan and Gorilla in Homo (Watson et al. 2001).

However, there is an alternative convention which uses "hominin" to exclude members of Panina, i.e. either just for Homo or for both human and australopithecine species. This alternative convention is referenced in e.g. Coyne (2009) [11] and in Dunbar (2014). [6] Potts (2010) in addition uses the name Hominini in a different sense, as excluding Pan, and uses "hominins" for this, while a separate tribe (rather than subtribe) for chimpanzees is introduced, under the name Panini. [5] In this recent convention, contra Arambourg, the term "hominin" is applied to Homo, Australopithecus, Ardipithecus, and others that arose after the split from the line that led to chimpanzees (see cladogram below); [12] [13] that is, they distinguish fossil members on the human side of the split, as "hominins", from those on the chimpanzee side, as "not hominins" (or "non-hominin hominids"). [11]

This cladogram shows the clade of superfamily Hominoidea and its descendent clades, focused on the division of Hominini (omitting detail on clades not ancestral to Hominini). The family Hominidae ("hominids") comprises the tribes Ponginae (including orangutans), Gorillini (including gorillas) and Hominini, the latter two forming the subfamily of Homininae. Hominini is divided into Panina ( chimpanzees) and Australopithecina (australopithecines). The Hominina (humans) are usually held to have emerged within the Australopithecina (which would roughly correspond to the alternative definition of Hominini according to the alternative definition which excludes Pan).

Genetic analysis combined with fossil evidence indicates that hominoids diverged from the Old World monkeys about 25 million years ago (Mya), near the Oligocene-Miocene boundary. [14] The most recent common ancestors (MRCA) of the subfamilies Homininae and Ponginae lived about 15 million years ago. The most well-known fossil genus of Ponginae is Sivapithecus, consisting of several species from 12.5 million to 8.5 million years ago. It differs from orangutans in dentition and postcranial morphology. [15] In the following cladogram, the approximate time the clades radiated newer clades is indicated in millions of years ago (Mya).

Both Sahelanthropus and Orrorin existed during the estimated duration of the ancestral chimpanzee–human speciation events, within the range of eight to four million years ago (Mya). Very few fossil specimens have been found that can be considered directly ancestral to genus Pan. News of the first fossil chimpanzee, found in Kenya, was published in 2005. However, it is dated to very recent times—between 545 and 284 thousand years ago. [16] The divergence of a "proto-human" or "pre-human" lineage separate from Pan appears to have been a process of complex speciation- hybridization rather than a clean split, taking place over the period of anywhere between 13 Mya (close to the age of the tribe Hominini itself) and some 4 Mya. Different chromosomes appear to have split at different times, with broad-scale hybridization activity occurring between the two emerging lineages as late as the period 6.3 to 5.4 Mya, according to Patterson et al. (2006), [17] This research group noted that one hypothetical late hybridization period was based in particular on the similarity of X chromosomes in the proto-humans and stem chimpanzees, suggesting that the final divergence was even as recent as 4 Mya. Wakeley (2008) rejected these hypotheses; he suggested alternative explanations, including selection pressure on the X chromosome in the ancestral populations prior to the chimpanzee–human last common ancestor (CHLCA). [18]

Most DNA studies find that humans and Pan are 99% identical, [19] [20] but one study found only 94% commonality, with some of the difference occurring in non-coding DNA. [21] It is most likely that the australopithecines, dating from 4.4 to 3 Mya, evolved into the earliest members of genus Homo. [22] [23] In the year 2000, the discovery of Orrorin tugenensis, dated as early as 6.2 Mya, briefly challenged critical elements of that hypothesis, [24] as it suggested that Homo did not in fact derive from australopithecine ancestors. [25] All the listed fossil genera are evaluated for:

Some, including Paranthropus, Ardipithecus, and Australopithecus, are broadly thought to be ancestral and closely related to Homo; [26] others, especially earlier genera, including Sahelanthropus (and perhaps Orrorin), are supported by one community of scientists but doubted by another. [27] [28]

Extant species are in bold. 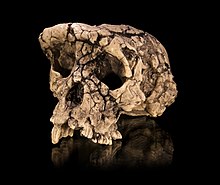 Cast of the skull of Toumaï 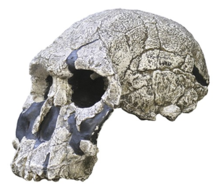