In mathematics, the Hermite polynomials are a classical orthogonal polynomial sequence.

The polynomials arise in:

Hermite polynomials were defined by Pierre-Simon Laplace in 1810, [1] [2] though in scarcely recognizable form, and studied in detail by Pafnuty Chebyshev in 1859. [3] Chebyshev's work was overlooked, and they were named later after Charles Hermite, who wrote on the polynomials in 1864, describing them as new. [4] They were consequently not new, although Hermite was the first to define the multidimensional polynomials in his later 1865 publications.

Like the other classical orthogonal polynomials, the Hermite polynomials can be defined from several different starting points. Noting from the outset that there are two different standardizations in common use, one convenient method is as follows:

These equations have the form of a Rodrigues' formula and can also be written as,

The two definitions are not exactly identical; each is a rescaling of the other:

These are Hermite polynomial sequences of different variances; see the material on variances below.

The notation He and H is that used in the standard references. [5] The polynomials Hen are sometimes denoted by Hn, especially in probability theory, because

is the probability density function for the normal distribution with expected value 0 and standard deviation 1. 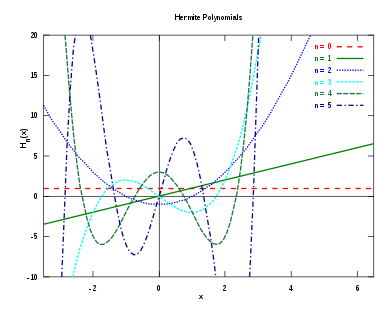 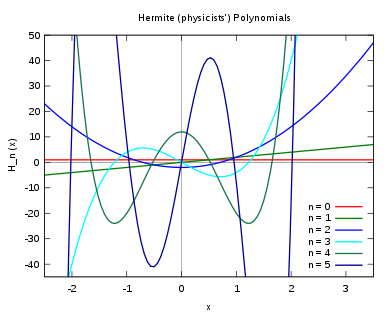 From the Rodrigues formulae given above, we can see that Hn(x) and Hen(x) are even or odd functions depending on n:

Hn(x) and Hen(x) are nth-degree polynomials for n = 0, 1, 2, 3,.... These polynomials are orthogonal with respect to the weight function ( measure)

is the Kronecker delta.

The probabilist polynomials are thus orthogonal with respect to the standard normal probability density function.

in which the inner product is given by the integral

Since the linear span of Hermite polynomials is the space of all polynomials, one has to show (in physicist case) that if f satisfies

vanishes identically. The fact then that F(it) = 0 for every real t means that the Fourier transform of f(x)e−x2 is 0, hence f is 0 almost everywhere. Variants of the above completeness proof apply to other weights with exponential decay.

In the Hermite case, it is also possible to prove an explicit identity that implies completeness (see section on the Completeness relation below).

The probabilist's Hermite polynomials are solutions of the differential equation

where λ is a constant. Imposing the boundary condition that u should be polynomially bounded at infinity, the equation has solutions only if λ is a non-negative integer, and the solution is uniquely given by

Rewriting the differential equation as an eigenvalue problem

may be understood as eigenfunctions of the differential operator

. This eigenvalue problem is called the Hermite equation, although the term is also used for the closely related equation

denotes a constant, after imposing the boundary condition that u should be polynomially bounded at infinity.

The general solutions to the above second-order differential equations are in fact linear combinations of both Hermite polynomials and confluent hypergeometric functions of the first kind. For example, for the physicist's Hermite equation

the general solution takes the form

are physicist's Hermite polynomials (of the first kind), and

are physicist's Hermite functions (of the second kind). The latter functions are compactly represented as

Individual coefficients are related by the following recursion formula:

For the physicist's polynomials, assuming

Individual coefficients are related by the following recursion formula:

The Hermite polynomials constitute an Appell sequence, i.e., they are a polynomial sequence satisfying the identity

These umbral identities are self-evident and included in the differential operator representation detailed below,

In consequence, for the mth derivatives the following relations hold:

It follows that the Hermite polynomials also satisfy the recurrence relation

These last relations, together with the initial polynomials H0(x) and H1(x), can be used in practice to compute the polynomials quickly.

One can formally expand using the binomial formula:

The physicist's Hermite polynomials can be written explicitly as

These two equations may be combined into one using the floor function:

The probabilist's Hermite polynomials He have similar formulas, which may be obtained from these by replacing the power of 2x with the corresponding power of √2 x and multiplying the entire sum by 2−n/2:

The inverse of the above explicit expressions, that is, those for monomials in terms of probabilist's Hermite polynomials He are

The corresponding expressions for the physicist's Hermite polynomials H follow directly by properly scaling this: [6]

The Hermite polynomials are given by the exponential generating function

This equality is valid for all complex values of x and t, and can be obtained by writing the Taylor expansion at x of the entire function z → e−z2 (in the physicist's case). One can also derive the (physicist's) generating function by using Cauchy's integral formula to write the Hermite polynomials as

Using this in the sum

one can evaluate the remaining integral using the calculus of residues and arrive at the desired generating function.

If X is a random variable with a normal distribution with standard deviation 1 and expected value μ, then

The moments of the standard normal (with expected value zero) may be read off directly from the relation for even indices:

where (2n − 1)!! is the double factorial. Note that the above expression is a special case of the representation of the probabilist's Hermite polynomials as moments:

holds true. For certain cases concerning a wider range of evaluation, it is necessary to include a factor for changing amplitude:

which, using Stirling's approximation, can be further simplified, in the limit, to

This expansion is needed to resolve the wavefunction of a quantum harmonic oscillator such that it agrees with the classical approximation in the limit of the correspondence principle.

A better approximation, which accounts for the variation in frequency, is given by

A finer approximation, [8] which takes into account the uneven spacing of the zeros near the edges, makes use of the substitution

with which one has the uniform approximation

Similar approximations hold for the monotonic and transition regions. Specifically, if

with t complex and bounded, the approximation is

where Ai is the Airy function of the first kind.

In terms of the probabilist's polynomials this translates to

Relations to other functions

The physicist's Hermite polynomials can be expressed as a special case of the parabolic cylinder functions:

in the right half-plane, where U(a, b, z) is Tricomi's confluent hypergeometric function. Similarly,

where D represents differentiation with respect to x, and the exponential is interpreted by expanding it as a power series. There are no delicate questions of convergence of this series when it operates on polynomials, since all but finitely many terms vanish.

Since the power-series coefficients of the exponential are well known, and higher-order derivatives of the monomial xn can be written down explicitly, this differential-operator representation gives rise to a concrete formula for the coefficients of Hn that can be used to quickly compute these polynomials.

The existence of some formal power series g(D) with nonzero constant coefficient, such that Hen(x) = g(D)xn, is another equivalent to the statement that these polynomials form an Appell sequence. Since they are an Appell sequence, they are a fortiori a Sheffer sequence.

with the contour encircling the origin.

The probabilist's Hermite polynomials defined above are orthogonal with respect to the standard normal probability distribution, whose density function is

which has expected value 0 and variance 1.

Scaling, one may analogously speak of generalized Hermite polynomials [9]

of variance α, where α is any positive number. These are then orthogonal with respect to the normal probability distribution whose density function is

They are given by

then the polynomial sequence whose nth term is

is called the umbral composition of the two polynomial sequences. It can be shown to satisfy the identities

The last identity is expressed by saying that this parameterized family of polynomial sequences is known as a cross-sequence. (See the above section on Appell sequences and on the differential-operator representation, which leads to a ready derivation of it. This binomial type identity, for α = β = 1/2, has already been encountered in the above section on #Recursion relations.)

Since polynomial sequences form a group under the operation of umbral composition, one may denote by

the sequence that is inverse to the one similarly denoted, but without the minus sign, and thus speak of Hermite polynomials of negative variance. For α > 0, the coefficients of

are just the absolute values of the corresponding coefficients of

These arise as moments of normal probability distributions: The nth moment of the normal distribution with expected value μ and variance σ2 is

where X is a random variable with the specified normal distribution. A special case of the cross-sequence identity then says that

One can define the Hermite functions (often called Hermite-Gaussian functions) from the physicist's polynomials:

Since these functions contain the square root of the weight function and have been scaled appropriately, they are orthonormal:

and they form an orthonormal basis of L2(R). This fact is equivalent to the corresponding statement for Hermite polynomials (see above).

The Hermite functions are closely related to the Whittaker function ( Whittaker & Watson 1996) Dn(z):

and thereby to other parabolic cylinder functions.

This equation is equivalent to the Schrödinger equation for a harmonic oscillator in quantum mechanics, so these functions are the eigenfunctions.

This formula can be used in connection with the recurrence relations for Hen and ψn to calculate any derivative of the Hermite functions efficiently.

For real x, the Hermite functions satisfy the following bound due to Harald Cramér [10] [11] and Jack Indritz: [12]

Hermite functions as eigenfunctions of the Fourier transform

The Hermite functions ψn(x) are a set of eigenfunctions of the continuous Fourier transform F. To see this, take the physicist's version of the generating function and multiply by e−1/2x2. This gives

The Fourier transform of the left side is given by

The Fourier transform of the right side is given by

The Hermite functions ψn(x) are thus an orthonormal basis of L2(R), which diagonalizes the Fourier transform operator. [13]

leading to the oscillator Laguerre functions

For all natural integers n, it is straightforward to see [14] that

where the Wigner distribution of a function x ∈ L2(R, C) is defined as

This is a fundamental result for the quantum harmonic oscillator discovered by Hip Groenewold in 1946 in his PhD thesis. [15] It is the standard paradigm of quantum mechanics in phase space.

There are further relations between the two families of polynomials.

In the Hermite polynomial Hen(x) of variance 1, the absolute value of the coefficient of xk is the number of (unordered) partitions of an n-element set into k singletons and n − k/2 (unordered) pairs. Equivalently, it is the number of involutions of an n-element set with precisely k fixed points, or in other words, the number of matchings in the complete graph on n vertices that leave k vertices uncovered (indeed, the Hermite polynomials are the matching polynomials of these graphs). The sum of the absolute values of the coefficients gives the total number of partitions into singletons and pairs, the so-called telephone numbers

These numbers may also be expressed as a special value of the Hermite polynomials: [16]

Moreover, the following completeness identity for the above Hermite functions holds in the sense of distributions:

where δ is the Dirac delta function, ψn the Hermite functions, and δ(x − y) represents the Lebesgue measure on the line y = x in R2, normalized so that its projection on the horizontal axis is the usual Lebesgue measure.

which is often stated equivalently as a separable kernel, [17] [18]

The function (x, y) → E(x, y; u) is the bivariate Gaussian probability density on R2, which is, when u is close to 1, very concentrated around the line y = x, and very spread out on that line. It follows that

when f and g are continuous and compactly supported.

This yields that f can be expressed in Hermite functions as the sum of a series of vectors in L2(R), namely,

In order to prove the above equality for E(x,y;u), the Fourier transform of Gaussian functions is used repeatedly:

The Hermite polynomial is then represented as

With this representation for Hn(x) and Hn(y), it is evident that

and this yields the desired resolution of the identity result, using again the Fourier transform of Gaussian kernels under the substitution