From Wikipedia
(Redirected from Harmonic mode)
https://en.wikipedia.org/wiki/Harmonic_mode
Pattern of oscillating motion in a system

The most general motion of a system is a superposition of its normal modes. The modes are normal in the sense that they can move independently, that is to say that an excitation of one mode will never cause motion of a different mode. In mathematical terms, normal modes are orthogonal to each other.

Vibration of a single normal mode of a circular disc with a pinned boundary condition along the entire outer edge. See other modes.

In the wave theory of physics and engineering, a mode in a dynamical system is a standing wave state of excitation, in which all the components of the system will be affected sinusoidally at a fixed frequency associated with that mode.

Because no real system can perfectly fit under the standing wave framework, the mode concept is taken as a general characterization of specific states of oscillation, thus treating the dynamic system in a linear fashion, in which linear superposition of states can be performed.

The concept of normal modes also finds application in other dynamical systems, such as optics, quantum mechanics, atmospheric dynamics and molecular dynamics.

For a given amplitude on the modal variable, each mode will store a specific amount of energy because of the sinusoidal excitation.

In linear systems each mode is entirely independent of all other modes. In general all modes have different frequencies (with lower modes having lower frequencies) and different mode shapes. 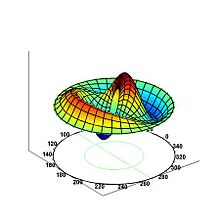 A mode shape of a drum membrane, with nodal lines shown in pale green

When expanded to a two dimensional system, these nodes become lines where the displacement is always zero. If you watch the animation above you will see two circles (one about halfway between the edge and center, and the other on the edge itself) and a straight line bisecting the disk, where the displacement is close to zero. In an idealized system these lines equal zero exactly, as shown to the right.

Consider two equal bodies (not affected by gravity), each of mass m, attached to three springs, each with spring constant k. They are attached in the following manner, forming a system that is physically symmetric:

, the equations of motion are:

Since we expect oscillatory motion of a normal mode (where ω is the same for both masses), we try:

Substituting these into the equations of motion gives us:

Since the exponential factor is common to all terms, we omit it and simplify:

And in matrix representation:

, we have two positive solutions:

The first normal mode is:

Which corresponds to both masses moving in the same direction at the same time. This mode is called antisymmetric.

The second normal mode is:

This corresponds to the masses moving in the opposite directions, while the center of mass remains stationary. This mode is called symmetric.

The general solution is a superposition of the normal modes where c1, c2, φ1, and φ2, are determined by the initial conditions of the problem.

The process demonstrated here can be generalized and formulated using the formalism of Lagrangian mechanics or Hamiltonian mechanics.

A standing wave is a continuous form of normal mode. In a standing wave, all the space elements (i.e. (x, y, z) coordinates) are oscillating in the same frequency and in phase (reaching the equilibrium point together), but each has a different amplitude. 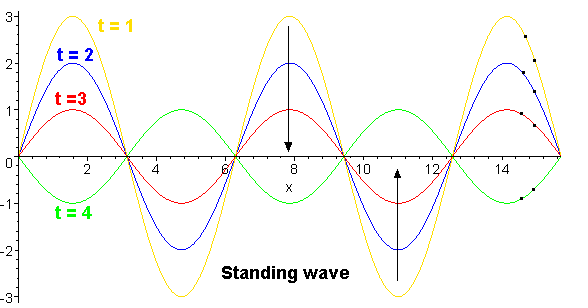 The general form of a standing wave is:

where ƒ(x, y, z) represents the dependence of amplitude on location and the cosine\sine are the oscillations in time.

In any solid at any temperature, the primary particles (e.g. atoms or molecules) are not stationary, but rather vibrate about mean positions. In insulators the capacity of the solid to store thermal energy is due almost entirely to these vibrations. Many physical properties of the solid (e.g. modulus of elasticity) can be predicted given knowledge of the frequencies with which the particles vibrate. The simplest assumption (by Einstein) is that all the particles oscillate about their mean positions with the same natural frequency ν. This is equivalent to the assumption that all atoms vibrate independently with a frequency ν. Einstein also assumed that the allowed energy states of these oscillations are harmonics, or integral multiples of hν. The spectrum of waveforms can be described mathematically using a Fourier series of sinusoidal density fluctuations (or thermal phonons). 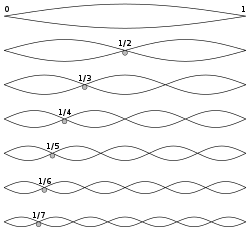 The fundamental and the first six overtones of a vibrating string. The mathematics of wave propagation in crystalline solids consists of treating the harmonics as an ideal Fourier series of sinusoidal density fluctuations (or atomic displacement waves).

Debye subsequently recognized that each oscillator is intimately coupled to its neighboring oscillators at all times. Thus, by replacing Einstein's identical uncoupled oscillators with the same number of coupled oscillators, Debye correlated the elastic vibrations of a one-dimensional solid with the number of mathematically special modes of vibration of a stretched string (see figure). The pure tone of lowest pitch or frequency is referred to as the fundamental and the multiples of that frequency are called its harmonic overtones. He assigned to one of the oscillators the frequency of the fundamental vibration of the whole block of solid. He assigned to the remaining oscillators the frequencies of the harmonics of that fundamental, with the highest of all these frequencies being limited by the motion of the smallest primary unit.

The normal modes of vibration of a crystal are in general superpositions of many overtones, each with an appropriate amplitude and phase. Longer wavelength (low frequency) phonons are exactly those acoustical vibrations which are considered in the theory of sound. Both longitudinal and transverse waves can be propagated through a solid, while, in general, only longitudinal waves are supported by fluids.

According to quantum theory, the mean energy of a normal vibrational mode of a crystalline solid with characteristic frequency ν is:

The term (1/2)hν represents the "zero-point energy", or the energy which an oscillator will have at absolute zero. E(ν) tends to the classic value kT at high temperatures

By knowing the thermodynamic formula,

the entropy per normal mode is:

The free energy is:

In order to calculate the internal energy and the specific heat, we must know the number of normal vibrational modes a frequency between the values ν and ν + dν. Allow this number to be f(ν)dν. Since the total number of normal modes is 3N, the function f(ν) is given by:

The integration is performed over all frequencies of the crystal. Then the internal energy U will be given by:

In quantum mechanics, a state

of a system is described by a wavefunction

which solves the Schrödinger equation. The square of the absolute value of

is the probability density to measure the particle in place x at time t.

Usually, when involving some sort of potential, the wavefunction is decomposed into a superposition of energy eigenstates, each oscillating with frequency of

. Thus, one may write

The eigenstates have a physical meaning further than an orthonormal basis. When the energy of the system is measured, the wavefunction collapses into one of its eigenstates and so the particle wavefunction is described by the pure eigenstate corresponding to the measured energy.

Normal modes are generated in the Earth from long wavelength seismic waves from large earthquakes interfering to form standing waves.

For an elastic, isotropic, homogeneous sphere, spheroidal, toroidal and radial (or breathing) modes arise. Spheroidal modes only involve P and SV waves (like Rayleigh waves) and depend on overtone number n and angular order l but have degeneracy of azimuthal order m. Increasing l concentrates fundamental branch closer to surface and at large l this tends to Rayleigh waves. Toroidal modes only involve SH waves (like Love waves) and do not exist in fluid outer core. Radial modes are just a subset of spheroidal modes with l=0. The degeneracy does not exist on Earth as it is broken by rotation, ellipticity and 3D heterogeneous velocity and density structure.

It may be assumed that each mode can be isolated, the self-coupling approximation, or that many modes close in frequency resonate, the cross-coupling approximation. Self-coupling will solely change the phase velocity and not the number of waves around a great circle, resulting in a stretching or shrinking of standing wave pattern. Modal cross-coupling occurs due to the rotation of the Earth, from aspherical elastic structure, or due to Earth's ellipticity and leads to a mixing of fundamental spheroidal and toroidal modes.