From Wikipedia
https://en.wikipedia.org/wiki/Hans_Richter_(conductor)
Austrian-Hungarian conductor (1843–1916)
For other people with the same name, see Hans Richter (disambiguation). 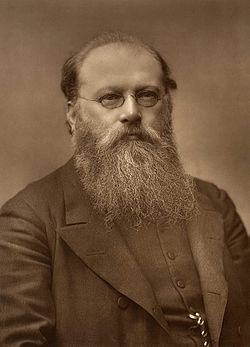 A woodburytype of Richter by Herbert Rose Barraud ( c. 1880s)

Richter was born in Raab ( Hungarian: Győr), Kingdom of Hungary, Austrian Empire. His father was a local composer, conductor and regens chori Anton Richter. His mother was opera-singer Jozefa Csazenszky. He studied at the Vienna Conservatory. He had a particular interest in the horn, and developed his conducting career at several different opera houses in the Austro-Hungarian Empire. He became associated with Richard Wagner in the 1860s, and played the solo trumpet part in the 1870 private premiere of the Siegfried Idyll. In 1876, he was chosen to conduct the first complete performance of Wagner's Der Ring des Nibelungen at the Bayreuth Festspielhaus.

In 1877, [1] he assisted the ailing composer as conductor of a major series of Wagner concerts in London, and from then onwards he became a familiar feature of English musical life, appearing at many choral festivals including as principal conductor of the Birmingham Triennial Music Festival (1885–1909) and directing the Hallé Orchestra (1899–1911) and the newly formed London Symphony Orchestra (1904–1911). In Europe his work was chiefly based in Vienna, where (transcending the bitter division between the followers of Wagner and those of Johannes Brahms) he gave much attention to the works of Brahms himself, Anton Bruckner (who once slipped a coin into his hand after a concert by way of a tip) and Antonín Dvořák (he gave the London and Vienna premieres of the Symphonic Variations); he also continued to work at Bayreuth.

In later years, Richter became a fervent admirer and advocate of Sir Edward Elgar and he came to accept Pyotr Ilyich Tchaikovsky. On one occasion, he laid down his baton and allowed a London orchestra to play the whole second movement of Tchaikovsky's Pathétique Symphony itself. Never afraid to experiment on behalf of the music he loved, he lent his authority to an English-language production of The Ring at Covent Garden (January and February 1909). In 1909 he delivered the British premiere, very shortly after the world premiere, in Boston, of Ignacy Jan Paderewski's Symphony in B minor "Polonia". Failing eyesight forced his retirement in 1911. He died at Bayreuth in 1916.

Richter's approach to conducting was monumental rather than mercurial or dynamic, emphasising the overall structure of major works in preference to bringing out individual moments of beauty or passion. Some observers regarded him as little more than a time-beater; but others, notably Eugene Goossens, pointed to the remarkable rhythmic vitality of his work, a quality which hardly squares with the image of Richter as a rather stolid and static personality.[ neutrality is disputed]

Hans Richter was first brought to England by Wagner in 1877 to conduct six operatic concerts in London. The impact made by Richter (then 32 years old) on the capital's orchestral players was enormous. They had never been rehearsed so thoroughly, nor with such discipline as that of a genuine musician rather than a showman; nothing was allowed to slip through as the fundamentals were revisited. Intonation was scrutinised, details brought out, tempi rationalised, notes corrected. His practical knowledge (he played every orchestral instrument) proved formidable and no weak player felt secure. He usually conducted rehearsals and performances of orchestral concerts and operas from memory.

The living composers whose works he introduced to British audiences were the greats in whose company he could be found, Wagner, Brahms, Bruckner, Dvorak, Tchaikovsky, Glazunov, Stanford, Parry and Elgar. For 20 years from 1879 he toured the length and breadth of Britain with his Richter Orchestra.

A rebuke he is supposed to have made to a musician in the Covent Garden orchestra is still sometimes quoted:

"Up with your damned nonsense will I put twice, or perhaps once, but sometimes always, by God, never." [2]