From Wikipedia, the free encyclopedia
Every graph has evenly many odd vertices

In graph theory, a branch of mathematics, the handshaking lemma is the statement that, in every finite undirected graph, the number of vertices that touch an odd number of edges is even. In more colloquial terms, in a party of people some of whom shake hands, the number of people who shake an odd number of other people's hands is even. [1] The handshaking lemma is a consequence of the degree sum formula, also sometimes called the handshaking lemma, [2] according to which the sum of the degrees (the numbers of times each vertex is touched) equals twice the number of edges in the graph. Both results were proven by Leonhard Euler ( 1736) in his famous paper on the Seven Bridges of Königsberg that began the study of graph theory. [3]

Beyond the Bridges of Königsberg and their generalization to Euler tours, other applications include proving that for certain combinatorial structures, the number of structures is always even, and assisting with the proofs of Sperner's lemma and the mountain climbing problem. The complexity class PPA encapsulates the difficulty of finding a second odd vertex, given one such vertex in a large implicitly-defined graph.

An undirected graph consists of a system of vertices, and edges connecting unordered pairs of vertices. In any graph, the degree

is defined as the number of edges that have

as an endpoint. For graphs that are allowed to contain loops connecting a vertex to itself, a loop should be counted as contributing two units to the degree of its endpoint for the purposes of the handshaking lemma. [2] Then, the handshaking lemma states that, in every finite graph, there must be an even number of vertices for which

is an odd number. [1] The vertices of odd degree in a graph are sometimes called odd nodes [4] or odd vertices; [5] in this terminology, the handshaking lemma can be rephrased as the statement that every graph has an even number of odd nodes. [4] [5]

The degree sum formula states that

is the set of vertices in the graph and

Both results also apply to any subgraph of the given graph and in particular to its connected components. A consequence is that, for any odd vertex, there must exist a path connecting it to another odd vertex. [9] 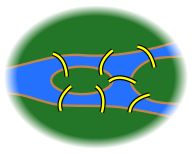 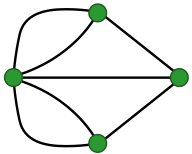 Leonhard Euler first proved the handshaking lemma in his work on the Seven Bridges of Königsberg, asking for a walking tour of the city of Königsberg (now Kaliningrad) crossing each of its seven bridges once. This can be translated into graph-theoretic terms as asking for an Euler path or Euler tour of a connected graph representing the city and its bridges: a walk through the graph that traverses each edge once, either ending at a different vertex than it starts in the case of an Euler path or returning to its starting point in the case of an Euler tour. Euler stated the fundamental results for this problem in terms of the number of odd vertices in the graph, which the handshaking lemma restricts to be an even number. If this number is zero, an Euler tour exists, and if it is two, an Euler path exists. Otherwise, the problem cannot be solved. In the case of the Seven Bridges of Königsberg, the graph representing the problem has four odd vertices, and has neither an Euler path nor an Euler tour. [3]

In the Christofides–Serdyukov algorithm for approximating the traveling salesperson problem, the fact that the number of odd vertices is even plays a key role, allowing the algorithm to connect those vertices in pairs in order to construct a graph on which an Euler tour forms an approximate TSP tour. [10]

Several combinatorial structures may be shown to be even in number by relating them to the odd vertices in an appropriate "exchange graph". [11]

For instance, as C. A. B. Smith proved, in any cubic graph

; these are cycles that pass through each vertex exactly once. Thomason (1978) used a proof based on the handshaking lemma to extend this result to graphs in which all vertices have odd degree. Thomason defines an exchange graph

, the vertices of which are in one-to-one correspondence with the Hamiltonian paths in

and continuing through edge

are defined as being connected by an edge in

if one may obtain

by adding a new edge to the end of

and removing another edge from the middle of

. This operation is reversible, forming a symmetric relation, so

is an undirected graph. If path

, then the vertex corresponding to

has degree equal to the number of ways that

; that is, the degree of this vertex in

(an even number) if

does not form part of a Hamiltonian cycle through

(an odd number) if

is part of a Hamiltonian cycle through

has an even number of odd vertices,

must have an even number of Hamiltonian cycles through

The handshaking lemma and degree sum formula are also used in proofs of several other results in mathematics. These include the following: 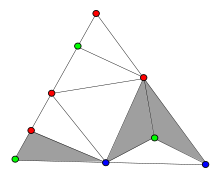 A Sperner coloring of a triangulated triangle, shaded to highlight the three small triangles that have all three vertex colors

Euler's proof of the degree sum formula uses the technique of double counting: he counts the number of incident pairs

is an edge and vertex

is one of its endpoints, in two different ways. Vertex

. Since these two formulas count the same set of objects, they must have equal values. The same proof can be interpreted as summing the entries of the incidence matrix of the graph in two ways, by rows to get the sum of degrees and by columns to get twice the number of edges. [5]

For graphs, the handshaking lemma follows as a corollary of the degree sum formula. [8] In a sum of integers, the parity of the sum is not affected by the even terms in the sum; the overall sum is even when there is an even number of odd terms, and odd when there is an odd number of odd terms. Since one side of the degree sum formula is the even number

Alternatively, it is possible to use mathematical induction to prove the degree sum formula, [2] or to prove directly that the number of odd-degree vertices is even, by removing one edge at a time from a given graph and using a case analysis on the degrees of its endpoints to determine the effect of this removal on the parity of the number of odd-degree vertices. [17]

In special classes of graphs 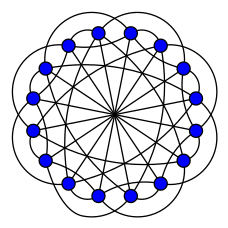 The Clebsch graph, regular of degree five, has an even number of vertices (16) and a number of edges (40) that is a multiple of five. 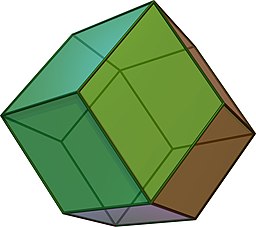 The degree sum formula implies that every

edges. [18] Because the number of edges must be an integer, it follows that when

is odd the number of vertices must be even. [19] Additionally, for odd values of

, the number of edges must be divisible by

A bipartite graph has its vertices split into two subsets, with each edge having one endpoint in each subset. It follows from the same double counting argument that, in each subset, the sum of degrees equals the number of edges in the graph. In particular, both subsets have equal degree sums. [21] For biregular graphs, with a partition of the vertices into subsets

with every vertex in a subset

, it must be the case that

An infinite graph with only one odd vertex

The handshaking lemma does not apply in its usual form to infinite graphs, even when they have only a finite number of odd-degree vertices. For instance, an infinite path graph with one endpoint has only a single odd-degree vertex rather than having an even number of such vertices. However, it is possible to formulate a version of the handshaking lemma using the concept of an end, an equivalence class of semi-infinite paths ("rays") considering two rays as equivalent when there exists a third ray that uses infinitely many vertices from each of them. The degree of an end is the maximum number of edge-disjoint rays that it contains, and an end is odd if its degree is finite and odd. More generally, it is possible to define an end as being odd or even, regardless of whether it has infinite degree, in graphs for which all vertices have finite degree. Then, in such graphs, the number of odd vertices and odd ends, added together, is either even or infinite. [23]

has all degree even and

has all degree odd with

In connection with the exchange graph method for proving the existence of combinatorial structures, it is of interest to ask how efficiently these structures may be found. For instance, suppose one is given as input a Hamiltonian cycle in a cubic graph; it follows from Smith's theorem that there exists a second cycle. How quickly can this second cycle be found? Papadimitriou (1994) investigated the computational complexity of questions such as this, or more generally of finding a second odd-degree vertex when one is given a single odd vertex in a large implicitly-defined graph. He defined the complexity class PPA to encapsulate problems such as this one; [27] a closely related class defined on directed graphs, PPAD, has attracted significant attention in algorithmic game theory because computing a Nash equilibrium is computationally equivalent to the hardest problems in this class. [28]

Computational problems proven to be complete for the complexity class PPA include computational tasks related to Sperner's lemma [29] and to fair subdivision of resources according to the Hobby–Rice theorem. [30]