How many colors are needed to color the plane so that no two points at unit distance are the same color? 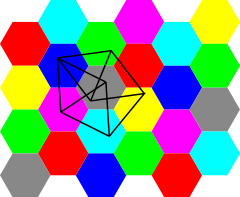 A seven-coloring of the plane, and a four-chromatic unit distance graph in the plane (the Moser spindle), proving that the chromatic number of a plane is bounded above by 7 and below by 4 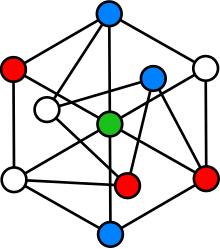 In geometric graph theory, the HadwigerŌĆōNelson problem, named after Hugo Hadwiger and Edward Nelson, asks for the minimum number of colors required to color the plane such that no two points at distance 1 from each other have the same color. The answer is unknown, but has been narrowed down to one of the numbers 5, 6 or 7. The correct value may depend on the choice of axioms for set theory. [1]

According to Jensen & Toft (1995), the problem was first formulated by Nelson in 1950, and first published by Gardner (1960). Hadwiger (1945) had earlier published a related result, showing that any cover of the plane by five congruent closed sets contains a unit distance in one of the sets, and he also mentioned the problem in a later paper ( Hadwiger 1961). Soifer (2008) discusses the problem and its history extensively.

One application of the problem connects it to the BeckmanŌĆōQuarles theorem, according to which any mapping of the Euclidean plane (or any higher dimensional space) to itself that preserves unit distances must be an isometry, preserving all distances. [2] Finite colorings of these spaces can be used to construct mappings from them to higher-dimensional spaces that preserve distances but are not isometries. For instance, the Euclidean plane can be mapped to a six-dimensional space by coloring it with seven colors so that no two points at distance one have the same color, and then mapping the points by their colors to the seven vertices of a six-dimensional regular simplex with unit-length edges. This maps any two points at unit distance to distinct colors, and from there to distinct vertices of the simplex, at unit distance apart from each other. However, it maps all other distances to zero or one, so it is not an isometry. If the number of colors needed to color the plane could be reduced from seven to a lower number, the same reduction would apply to the dimension of the target space in this construction. [3]

The fact that the chromatic number of the plane must be at least four follows from the existence of a seven-vertex unit distance graph with chromatic number four, named the Moser spindle after its discovery in 1961 by the brothers William and Leo Moser. This graph consists of two unit equilateral triangles joined at a common vertex, x. Each of these triangles is joined along another edge to another equilateral triangle; the vertices y and z of these joined triangles are at unit distance from each other. If the plane could be three-colored, the coloring within the triangles would force y and z to both have the same color as x, but then, since y and z are at unit distance from each other, we would not have a proper coloring of the unit distance graph of the plane. Therefore, at least four colors are needed to color this graph and the plane containing it. An alternative lower bound in the form of a ten-vertex four-chromatic unit distance graph, the Golomb graph, was discovered at around the same time by Solomon W. Golomb. [4]

The upper bound of seven on the chromatic number follows from the existence of a tessellation of the plane by regular hexagons, with diameter slightly less than one, that can be assigned seven colors in a repeating pattern to form a 7-coloring of the plane. According to Soifer (2008), this upper bound was first observed by John R. Isbell.

The problem can easily be extended to higher dimensions. Finding the chromatic number of 3-space is a particularly interesting problem. As with the version on the plane, the answer is not known, but has been shown to be at least 6 and at most 15. [8]

. A lower bound from simplexes is

, a lower bound of

is available using a generalization of the Moser spindle: a pair of the objects (each two simplexes glued together on a facet) which are joined on one side by a point and the other side by a line. An exponential lower bound was proved by Frankl and Wilson in 1981. [9]

One can also consider colorings of the plane in which the sets of points of each color are restricted to sets of some particular type. [10] Such restrictions may cause the required number of colors to increase, as they prevent certain colorings from being considered acceptable. For instance, if a coloring of the plane consists of regions bounded by Jordan curves, then at least six colors are required. [11]