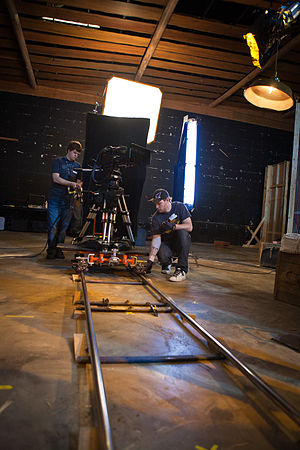 Grips working on a skateboard dolly

In the United States, Canada and the United Kingdom, grips are camera support equipment technicians in the filmmaking and video production industries. They constitute their own department on a film set and are directed by a key grip. Grips have two main functions: The first is to work closely with the camera department to provide camera support, especially if the camera is mounted to a dolly, crane, or in an unusual position, such as the top of a ladder. Some grips may specialize in operating camera dollies or camera cranes. The second function is to work closely with the electrical department to create lighting set-ups necessary for a shot under the direction of the director of photography. [1]

Grips' responsibility is to build and maintain all the equipment that supports cameras. This equipment, which includes tripods, dollies, tracks, jibs, cranes, and static rigs, is constructed of delicate yet heavy duty parts requiring a high level of experience to operate and move. Every scene in a feature film is shot using one or more cameras, each mounted on highly complex, extremely expensive, heavy duty equipment. Grips assemble this equipment according to meticulous specifications and push, pull, mount or hang it from a variety of settings. The equipment can be as basic as a tripod standing on a studio floor, to hazardous operations such as mounting a camera on a 100 ft crane, or hanging it from a helicopter swooping above a mountain range.

Good Grips perform a crucial role in ensuring that the artifice of film is maintained, and that camera moves are as seamless as possible. Grips are usually requested by the DoP (Director of Photography) or the camera operator. Although the work is physically demanding and the hours are long, the work can be very rewarding. Many Grips work on both commercials and features.

In the UK, Australia and most parts of Europe, grips are not involved in lighting. In the "British System", adopted throughout Europe and the British Commonwealth (excluding Canada), a grip is solely responsible for camera mounting and support.

The term "grip" is derived from an older term in U.S. theatre where it designated stagehands who moved scenery. [3] 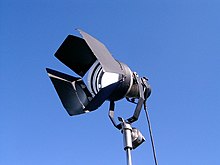 An HMI head on a stand

On all union jobs, grips do not touch the lights themselves. The placement of lighting instruments and electric power distribution is handled by the electricians who work under a gaffer. Grips handle all the non-electrical equipment that modifies the light. This work is done by setting stands that hold flags, nets, diffusing materials or other gobos that control the quality, intensity, or shape of the light.

Grips also set "passive fill" which is a term for the reflected light that is "bounced" back onto a subject on the fill or non- key light side. The first choice for most film-makers' fill is a product known in the US as beadboard [5] [6] [7] [8] [9] and called "poly", short for polystyrene, in Europe. It is rigid insulation made for the construction trade, but was adopted by the film trade because of its "true-white" color and "soft" bounce.

Grips may also be called on to set "negative fill", which is the reduction of ambient or non-directional light, such as ambient sunlight, to raise contrast on the subject. This is achieved by setting "solids", made of black fabric, either flags (up to 4' × 4') or rags (6' × 6' or larger) on the non-key light side or wherever the negative fill is desired.

When shooting day exteriors, grips perform similar functions, but with the sun as the primary light source. Grips use overhead frames up to 20' × 20' or larger for the shaping or filtering of sunlight. The lighting set-ups for these exterior shots can become quite extensive, and the use of boom lifts (called "condors") is common. Condors are especially useful at night when they are rigged to raise lights or diffusing material (up to 120 feet in the air) to create moon-effect lighting.

Grips also satisfy rigging needs on set. Examples of simple rigs include the menace arm, which allows a light to be boomed over set using one stand, or goalposts that span over top of set using two stands. More advanced rigs can include working with pulleys, steel cable or trusses. Grips also rig picture cars on process trailers, placing camera and lights around the vehicle for driving shots. This often includes the use of hood mounts, side mounts, suction cup mounts and proprietary clamps to attach film equipment to vehicles without causing damage.

Grips also do "blackouts" and "tenting-out" windows and doors. When shooting interiors day-for-night on location, grips need to eliminate all daylight entering the set. If windows or other openings are not visible in a shot, the light may be blacked out with a cloth known as duvetyne or rags, and in rare cases, plastic sheeting. When windows or doors are seen from camera, black out tents must be created outside of windows to allow lights to be placed outside, or green screens to be seen through the window, lit only by lights placed by electricians.

Grips are also responsible for safety on the set as it relates to the force of gravity. Insofar as stands, ladders, scaffolds, and overhead rigs are properly installed, grips are charged with making them safe because the other crew members must climb on, walk around, or otherwise negotiate the different grip set-ups. The key grip may even be held responsible for injuries that happen on set, especially if the injury is caused by a falling lighting instrument. 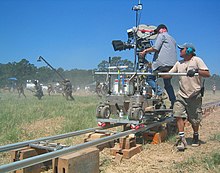 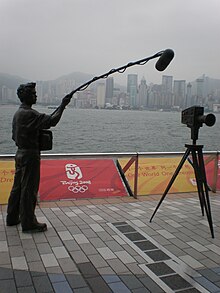 A grip uses some tools typically used by mechanics and construction workers. As in those vocations, grips need hand tools at the ready.(Tools such as ratchet straps, wedges and a normal tool box)

A C-clamp manufactured with studs for affixing lighting fixtures.

A C-Clamp manufactured by Altman Stage Lighting for use on their lighting instruments. Note the square-headed pan screw on the shaft of the clamp. 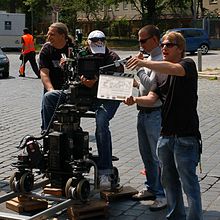 A clapperboard in use