From Wikipedia
https://en.wikipedia.org/wiki/Great_Slave_Lake
For the lake in Alberta, Canada, see Lesser Slave Lake.
Second-largest lake in the Northwest Territories, Canada
Body of water

The lake shares its name with the First Nations peoples of the Dene family called Slavey by their enemies the Cree. Towns situated on the lake include (clockwise from east) Łutselk'e, Fort Resolution, Hay River, Hay River Reserve, Behchokǫ̀, Yellowknife, Ndilǫ, and Dettah. The only community in the East Arm is Łutselk'e, a hamlet of about 350 people, largely Chipewyan Indigenous peoples of the Dene Nation, and the abandoned winter camp and Hudson's Bay Company post Fort Reliance. Along the south shore, east of Hay River is the abandoned Pine Point Mine and the company town of Pine Point.

Indigenous peoples were the first settlers around the lake after the retreat of glacial ice. Archaeological evidence has revealed several different periods of cultural history, including Northern Plano Paleoindian tradition (8,000 years before present), Shield Archaic (6,500 years), Arctic small tool tradition (3,500 years), and the Taltheilei Shale tradition (2,500 years before present). Each culture has left a distinct mark in the archaeological record based on type or size of lithic tools. [12]

Great Slave Lake was put on European maps during the emergence of the fur trade towards the northwest from Hudson Bay in the mid 18th century. The name 'Great Slave' came from the English language translation of the Cree exonym, Awokanek ( Slavey), which they called the Dene Tha. The enslaved people were Dene tribes living on the lake's southern shores at that time. [13] [14] [15] As the French explorers dealt directly with the Cree traders, the large lake was referred to as "Grand lac des Esclaves" which was eventually translated into English as "Great Slave Lake". [16]

British fur trader Samuel Hearne explored Great Slave Lake in 1771 and crossed the frozen lake, which he named Lake Athapuscow. In 1897-1898, the American frontiersman Charles "Buffalo" Jones traveled to the Arctic Circle, where his party wintered in a cabin that they had constructed near the Great Slave Lake. Jones's story of how he and his party shot and fended off a hungry wolf pack near Great Slave Lake was verified in 1907 by Ernest Thompson Seton and Edward Alexander Preble when they discovered the remains of the animals near the long abandoned cabin. [17]

In the 1930s, gold was discovered on the North Arm of Great Slave Lake, leading to the establishment of Yellowknife which would become the capital of the NWT. In 1960, an all-season highway was built around the west side of the lake, originally an extension of the Mackenzie Highway but now known as Yellowknife Highway or Highway 3. On January 24, 1978, a Soviet Radar Ocean Reconnaissance Satellite, named Kosmos 954, built with an onboard nuclear reactor fell from orbit and disintegrated. Pieces of the nuclear core fell in the vicinity of Great Slave Lake. Some of the nuclear debris was recovered by a joint Canadian Armed Forces and United States Armed Forces military operation called Operation Morning Light. [18]

In the late 2010s, many placenames within the Northwest Territories were restored to their indigenous names. It has been suggested that the lake be renamed as well, particularly because of the mention of slavery. "Great Slave Lake is actually a very terrible name, unless you're a proponent of slavery," says Dëneze Nakehk'o, a Northwest Territories educator and founding member of First Nations organization Dene Nahjo. [19] "It's a beautiful place. It's majestic; it's huge. And I don't really think the current name on the map is fitting for that place." He has suggested Tu Nedhé, the Dene Soline name for the lake, as an alternative. [20] Tucho, the Dehcho Dene term for the lake, has also been suggested. [19] 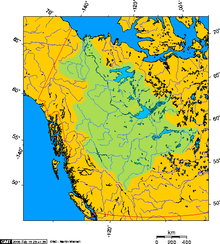 The Hay, Slave, Lockhart, and Taltson Rivers are its chief tributaries. It is drained by the Mackenzie River. Though the western shore is forested, the east shore and northern arm are tundra-like. The southern and eastern shores reach the edge of the Canadian Shield. Along with other lakes such as the Great Bear and Athabasca, it is a remnant of the vast glacial Lake McConnell.

The lake has a very irregular shoreline. The East Arm of Great Slave Lake is filled with islands, and the area is within the proposed Thaidene Nene National Park Reserve. The Pethei Peninsula separates the East Arm into McLeod Bay in the north and Christie Bay in the south. The lake is at least partially frozen during an average of eight months of the year.

On some of the plains surrounding Great Slave Lake, climax polygonal bogs have formed, the early successional stage to which often consists of pioneer black spruce. [22]

South of Great Slave Lake, in a remote corner of Wood Buffalo National Park, is the Whooping Crane Summer Range, a nesting site of a remnant flock of whooping cranes, discovered in 1954. [23]

Bodies of water and tributaries

Rivers that flow into Great Slave Lake include (going clockwise from the community of Behchokǫ̀); [26] [27]

April 28, 2012, on Yellowknife Bay. The surface melt begins to make transportation more difficult to and from the houseboats near Jolliffe Island.

From 2014 to 2016, Animal Planet aired a documentary series called Ice Lake Rebels. It takes place on Great Slave Lake, and details the lives of houseboaters on the lake. [28]