From Wikipedia, the free encyclopedia
Time dilation due to gravitation
For broader coverage of this topic, see Time dilation.

Gravitational time dilation is a form of time dilation, an actual difference of elapsed time between two events as measured by observers situated at varying distances from a gravitating mass. The lower the gravitational potential (the closer the clock is to the source of gravitation), the slower time passes, speeding up as the gravitational potential increases (the clock getting away from the source of gravitation). Albert Einstein originally predicted this effect in his theory of relativity and it has since been confirmed by tests of general relativity. [1]

This has been demonstrated by noting that atomic clocks at differing altitudes (and thus different gravitational potential) will eventually show different times. The effects detected in such Earth-bound experiments are extremely small, with differences being measured in nanoseconds. Relative to Earth's age in billions of years, Earth's core is effectively 2.5 years younger than its surface. [2] Demonstrating larger effects would require greater distances from the Earth or a larger gravitational source.

Gravitational time dilation was first described by Albert Einstein in 1907 [3] as a consequence of special relativity in accelerated frames of reference. In general relativity, it is considered to be a difference in the passage of proper time at different positions as described by a metric tensor of spacetime. The existence of gravitational time dilation was first confirmed directly by the Pound–Rebka experiment in 1959, and later refined by Gravity Probe A and other experiments.

Clocks that are far from massive bodies (or at higher gravitational potentials) run more quickly, and clocks close to massive bodies (or at lower gravitational potentials) run more slowly. For example, considered over the total time-span of Earth (4.6 billion years), a clock set in a geostationary position at an altitude of 9,000 meters above sea level, such as perhaps at the top of Mount Everest ( prominence 8,848 m), would be about 39 hours ahead of a clock set at sea level. [7] [8] This is because gravitational time dilation is manifested in accelerated frames of reference or, by virtue of the equivalence principle, in the gravitational field of massive objects. [9]

According to general relativity, inertial mass and gravitational mass are the same, and all accelerated reference frames (such as a uniformly rotating reference frame with its proper time dilation) are physically equivalent to a gravitational field of the same strength. [10]

Consider a family of observers along a straight "vertical" line, each of whom experiences a distinct constant g-force directed along this line (e.g., a long accelerating spacecraft, [11] [12] a skyscraper, a shaft on a planet). Let

be the dependence of g-force on "height", a coordinate along the aforementioned line. The equation with respect to a base observer at

is the total time dilation at a distant position

is the dependence of g-force on "height"

is the speed of light, and

For simplicity, in a Rindler's family of observers in a flat spacetime, the dependence would be

On the other hand, when

is nearly constant and

is much smaller than

can also be used.

See Ehrenfest paradox for application of the same formula to a rotating reference frame in flat spacetime.

Outside a non-rotating sphere

A common equation used to determine gravitational time dilation is derived from the Schwarzschild metric, which describes spacetime in the vicinity of a non-rotating massive spherically symmetric object. The equation is

In the Schwarzschild metric, free-falling objects can be in circular orbits if the orbital radius is larger than

(the radius of the photon sphere). The formula for a clock at rest is given above; the formula below gives the general relativistic time dilation for a clock in a circular orbit: [13] [14]

Both dilations are shown in the figure below. 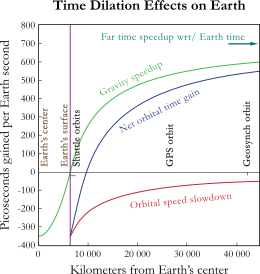 Satellite clocks are slowed by their orbital speed, but accelerated by their distance out of Earth's gravitational well.

Gravitational time dilation has been experimentally measured using atomic clocks on airplanes, such as the Hafele–Keating experiment. The clocks aboard the airplanes were slightly faster than clocks on the ground. The effect is significant enough that the Global Positioning System's artificial satellites need to have their clocks corrected. [15]

Additionally, time dilations due to height differences of less than one metre have been experimentally verified in the laboratory. [16]

Gravitational time dilation in the form of gravitational redshift has also been confirmed by the Pound–Rebka experiment and observations of the spectra of the white dwarf Sirius B.

Gravitational time dilation has been measured in experiments with time signals sent to and from the Viking 1 Mars lander. [17] [18]