From Wikipedia, the free encyclopedia
Type of potential energy 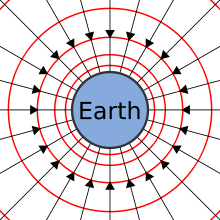 are the masses of the two particles,

is the distance between them, and

is the gravitational constant. [1]

is the object's mass,

is the gravity of Earth, and

is the height of the object's center of mass above a chosen reference level. [1]

The force between a point mass,

, and another point mass,

from infinity to the final distance

(for example the radius of Earth) of the two mass points, the force is integrated with respect to displacement:

, the total work done on the object can be written as: [4]

In the common situation where a much smaller mass

, the gravitational field is nearly constant and so the expression for gravitational energy can be considerably simplified. The change in potential energy moving from the surface (a distance

from the center) to a height

above the surface is

is small, as it must be close to the surface where

is constant, then this expression can be simplified using the binomial approximation

As the gravitational field is

at the surface (instead of at infinity), the familiar expression for gravitational potential energy emerges: [5]

A 2 dimensional depiction of curved geodesics ("world lines"). According to general relativity, mass distorts spacetime and gravity is a natural consequence of Newton's First Law. Mass tells spacetime how to bend, and spacetime tells mass how to move.