In discrete mathematics, and more specifically in graph theory, a graph is a structure amounting to a set of objects in which some pairs of the objects are in some sense "related". The objects correspond to mathematical abstractions called vertices (also called nodes or points) and each of the related pairs of vertices is called an edge (also called link or line). [1] Typically, a graph is depicted in diagrammatic form as a set of dots or circles for the vertices, joined by lines or curves for the edges. Graphs are one of the objects of study in discrete mathematics.

The edges may be directed or undirected. For example, if the vertices represent people at a party, and there is an edge between two people if they shake hands, then this graph is undirected because any person A can shake hands with a person B only if B also shakes hands with A. In contrast, if an edge from a person A to a person B means that A owes money to B, then this graph is directed, because owing money is not necessarily reciprocated.

Graphs are the basic subject studied by graph theory. The word "graph" was first used in this sense by J. J. Sylvester in 1878 due to a direct relation between mathematics and chemical structure (what he called a chemico-graphical image). [2] [3] 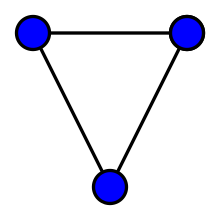 A graph with three vertices and three edges

A graph (sometimes called an undirected graph to distinguish it from a directed graph, or a simple graph to distinguish it from a multigraph) [4] [5] is a pair G = (V, E), where V is a set whose elements are called vertices (singular: vertex), and E is a set of paired vertices, whose elements are called edges (sometimes links or lines).

Sometimes, graphs are allowed to contain loops, which are edges that join a vertex to itself. To allow loops, the above definition must be changed by defining edges as multisets of two vertices instead of sets. Such generalized graphs are called graphs with loops or simply graphs when it is clear from the context that loops are allowed.

An empty graph is a graph that has an empty set of vertices (and thus an empty set of edges). The order of a graph is its number of vertices |V|. The size of a graph is its number of edges |E|. However, in some contexts, such as for expressing the computational complexity of algorithms, the size is |V| + |E| (otherwise, a non-empty graph could have size 0). The degree or valency of a vertex is the number of edges that are incident to it; for graphs [1]with loops, a loop is counted twice.

The edges of a graph define a symmetric relation on the vertices, called the adjacency relation. Specifically, two vertices x and y are adjacent if {x, y} is an edge. A graph may be fully specified by its adjacency matrix A, which is an n × n square matrix, with Aij specifying the number of connections from vertex i to vertex j. For a simple graph, Aij is either 0, indicating disconnection, or 1, indicating connection; moreover Aii = 0 because an edge in a simple graph cannot start and end at the same vertex. Graphs with self-loops will be characterized by some or all Aii being equal to a positive integer, and multigraphs (with multiple edges between vertices) will be characterized by some or all Aij being equal to a positive integer. Undirected graphs will have a symmetric adjacency matrix (meaning Aij = Aji). 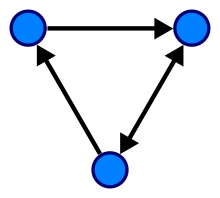 In one restricted but very common sense of the term, [8] a directed graph is a pair G = (V, E) comprising:

In the edge (x, y) directed from x to y, the vertices x and y are called the endpoints of the edge, x the tail of the edge and y the head of the edge. The edge is said to join x and y and to be incident on x and on y. A vertex may exist in a graph and not belong to an edge. The edge (y, x) is called the inverted edge of (x, y). Multiple edges, not allowed under the definition above, are two or more edges with both the same tail and the same head.

In one more general sense of the term allowing multiple edges, [8] a directed graph is an ordered triple G = (V, E, ϕ) comprising:

A loop is an edge that joins a vertex to itself. Directed graphs as defined in the two definitions above cannot have loops, because a loop joining a vertex

which is not in

. For directed multigraphs, the definition of

The edges of a directed simple graph permitting loops G is a homogeneous relation ~ on the vertices of G that is called the adjacency relation of G. Specifically, for each edge (x, y), its endpoints x and y are said to be adjacent to one another, which is denoted x ~ y.

A weighted graph with ten vertices and twelve edges

The category of all graphs is the comma category Set ↓ D where D: Set → Set is the functor taking a set s to s × s.