Sir Godfrey Kneller, 1st Baronet (born Gottfried Kniller; 8 August 1646 – 19 October 1723), was the leading portrait painter in England during the late 17th and early 18th centuries, and was court painter to English and British monarchs from Charles II to George I. His major works include The Chinese Convert (1687; Royal Collection, London); a series of four portraits of Isaac Newton painted at various junctures of the latter's life; a series of ten reigning European monarchs, including King Louis XIV of France; over 40 " kit-cat portraits" of members of the Kit-Cat Club; and ten " beauties" of the court of William III, to match a similar series of ten of Charles II's mistresses painted by Kneller's predecessor as court painter, Sir Peter Lely. 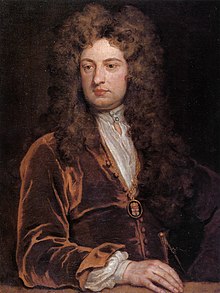 Kneller was born Gottfried Kniller in the Free City of Lübeck, the son of Zacharias Kniller, a portrait painter. [1] Kneller studied in Leiden, but became a pupil of Ferdinand Bol and Rembrandt Harmenszoon van Rijn in Amsterdam. He then travelled with his brother John Zacharias Kneller, who was an ornamental painter, to Rome and Venice in the early 1670s, painting historical subjects and portraits in the studio of Carlo Maratti, and later moved to Hamburg.

Portrait of Isaac Newton in 1689

The brothers came to England in 1676, [2] and won the patronage of the Duke of Monmouth. He was introduced to, and painted a portrait of, Charles II. In England, Kneller concentrated almost entirely on portraiture. In the spirit of enterprise, he founded a studio which churned out portraits on an almost industrial scale, relying on a brief sketch of the face with details added to a formulaic model, aided by the fashion for gentlemen to wear full wigs. His portraits set a pattern that was followed until William Hogarth and Joshua Reynolds.

Nevertheless, he established himself as a leading portrait artist in England. When Sir Peter Lely died in 1680, Kneller was appointed Principal Painter in Ordinary to the Crown by Charles II. [3] [4] [5] For about 20 years (c.1682–1702) he lived at No. 16-17 The Great Piazza, Covent Garden. [6] In the 1690s, Kneller painted the Hampton Court Beauties depicting the most glamorous ladies-in-waiting of the Royal Court for which he received his knighthood from William III. He produced a series of " Kit-cat" portraits of 48 leading politicians and men of letters, members of the Kit-Cat Club. Created a baronet by King George I on 24 May 1715, [1] he was also head of the Kneller Academy of Painting and Drawing from 1711 until 1716 in Great Queen Street, London, which counted such artists as Thomas Gibson amongst its founding directors. His paintings were praised by Whig members including John Dryden, Joseph Addison, [7] Richard Steele, and Alexander Pope.

On the landing in Horsham Museum in West Sussex hang works of art from the Museum's extensive painting collection, featuring a large 18th-century portrait of Charles Eversfield and his wife, of Denne Park House. [8] In the painting Eversfield is giving his wife some violets which signifies fidelity, love and honesty. It is likely that the picture was cut down at some time as it was unusual to stop just below the knee. It may have been painted by more than one person: someone who specialised in clothing, another in drapes, and so on, with perhaps Kneller painting the heads, for it was the portraits that gave the sitters their identity; everything else is rather formulaic.

He married a widow, Susanna Grave, on 23 January 1704 at St Bride's Church, London. [1] She was the daughter of the Reverend John Cawley, Archdeacon of Lincoln and Rector of Henley-on-Thames, and the granddaughter of regicide William Cawley. [1] The couple had no children.

Kneller died of fever in 1723 at Great Queen Street and his remains were interred at Twickenham. He had been a churchwarden at St Mary's, Twickenham, when the 14th-century nave collapsed in 1713 and was active in the plans for the church's reconstruction by John James. [9] His widow was buried at Twickenham on 11 December 1729. [1]

A memorial was erected in Westminster Abbey. [1] Kneller's will gave a pension of £100 a year to his assistant Edward Byng and entrusted Byng with seeing that all unfinished work was completed. Byng also inherited the drawings in Kneller's studio. [10] Kneller and his wife had no children together. [1] Most of his fortune was inherited by his grandson, Godfrey Kneller Huckle, who was the son of Agnes Huckle, [1] Kneller's illegitimate daughter by Mrs Voss, [11] and who took his grandfather's surname (Kneller) [12] as a condition of his inheritance.

The site of the house Kneller built in 1709 in Whitton, near Twickenham, became occupied by the mid-19th century Kneller Hall, home of the Royal Military School of Music. [1]

As to thinking better or worse of mankind from experience, some cunning people will not be satisfied unless they have put men to the test, as they think. There is a very good story told of Sir Godfrey Kneller, in his character of a Justice of the peace. A gentleman brought his servant before him, upon an accusation of having stolen some money from him; but it having come out that he had laid it purposely in the servant's way, in order to try his honesty, Sir Godfrey sent the master to prison.

In his hometown Lübeck there are works to be seen in the St. Annen Museum and in Saint Catherine Church. His former works at St. Mary's Church were destroyed by the Bombing of Lübeck 1942. A large oil portrait (84" x 55") of James VII of Scotland (King James II of England) hangs on the main staircase of private members' Club, The Caledonian Club, in Belgravia, London.

A portrait of Queen Anne that belongs to Trinity Hospital in Retford, Nottinghamshire has been attributed to Kneller by the auctioneers Phillips – though it is unsigned. The hospital has a strong connection with Queen Anne, the founder being a first cousin of her grandmother. The portrait was restored and cleaned in 1999.

Wikisource has the text of the 1885–1900 Dictionary of National Biography's article about Kneller, Godfrey.

Wikisource has the text of a 1920 Encyclopedia Americana article about Godfrey Kneller.
Retrieved from " https://en.wikipedia.org/?title=Godfrey_Kneller&oldid=1084519436"
Categories:
Hidden categories: