Giorgio Morandi (July 20, 1890 – June 18, 1964) was an Italian painter and printmaker who specialized in still life. His paintings are noted for their tonal subtlety in depicting apparently simple subjects, which were limited mainly to vases, bottles, bowls, flowers and landscapes.

Giorgio Morandi was born in Bologna to Andrea Morandi and Maria Maccaferri. He lived first on Via Lame where his brother Giuseppe (who died in 1903) and his sister Anna were born. The family then moved to Via Avesella where his two other sisters were born, Dina in 1900 and Maria Teresa in 1906. From 1907 to 1913 he studied at the Accademia di Belle Arti di Bologna [Academy of Fine Arts of Bologna]. After the death of his father in 1909, the family moved to Via Fondazza and Morandi became the head of the family.

At the Accademia, which based its traditions on 14th-century painting, Morandi taught himself to etch by studying books on Rembrandt. He was excellent at his studies, although his professors disapproved of the changes in his style during his final two years at the Accademia. [1] Even though he lived his whole life in Bologna, Morandi was influenced by the works of Cézanne, Derain, and Picasso. In 1910 he visited Florence, where the works of artists such as Giotto, Masaccio, Piero della Francesca, and Paolo Uccello made a profound impression on him. [2] He had a brief digression into a Futurist style in 1914. In that same year, Morandi was appointed instructor of drawing for elementary schools in Bologna—a post he held until 1929.

In 1915, he joined the army but had a breakdown and was indefinitely discharged. During the war, Morandi's still lifes became more reduced in their compositional elements and purer in form, revealing his admiration for both Cézanne and the Douanier Rousseau. [3]

Morandi's studio in Via Fondazza

The Metaphysical painting (Pittura Metafisica) phase in Morandi's work lasted from 1918 to 1922. This was to be his last major stylistic shift; thereafter, he focused increasingly on subtle gradations of hue, tone, and objects arranged in a unifying atmospheric haze, establishing the direction his art was to take for the rest of his life. Morandi showed in the Novecento Italiano exhibitions of 1926 and 1929, but was more specifically associated with the regional Strapaese group by the end of the decade, a fascist-influenced group emphasizing local cultural traditions. He was sympathetic to the Fascist party in the 1920s, [4] although his friendships with anti-Fascist figures led authorities to arrest him briefly in 1943. [5] From 1928 Morandi participated in some of the Venice Biennale exhibitions, in the Quadriennale in Rome and also exhibited in different Italian and foreign cities.

In 1929 Giorgio Morandi illustrated the work Il sole a picco by Vincenzo Cardarelli, winner of the Premio Bagutta. From 1930 to 1956, Morandi was a professor of etching at Accademia di Belle Arti. The 1948 Venice Biennale awarded him first prize for painting. He visited Paris for the first time in 1956, and in 1957 he won the grand prize in São Paulo's Biennial.

Quiet and polite, both in his private and public life, Morandi was much talked about in Bologna for his enigmatic yet very optimistic personality. Morandi lived on Via Fondazza, in Bologna, with his three sisters Anna, Dina and Maria Teresa. Morandi died of lung cancer on June 18, 1964. [6] 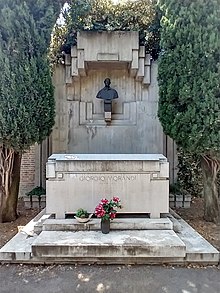 Morandi is buried in the Certosa di Bologna in the family tomb together with his three sisters.[ citation needed] On the tomb is a portrait of him by Giacomo Manzù.

Throughout his career, Morandi concentrated almost exclusively on still lifes and landscapes, except for a few self-portraits. With great sensitivity to tone, color, and compositional balance, he would depict the same familiar bottles and vases again and again in paintings notable for their simplicity of execution. A prolific painter, he completed some 1350 oil paintings. [7] He also executed 133 etchings, a significant body of work in its own right, and his drawings and watercolors often approach abstraction in their economy of means. He explained: "What interests me most is expressing what's in nature, in the visible world, that is".

Morandi was perceived as one of the few Italian artists of his generation to have escaped the taint of Fascism, and to have evolved a style of pure pictorial values congenial to modernist abstraction. Through his simple and repetitive motifs and economical use of color, value and surface, Morandi became a prescient and important forerunner of Minimalism.

Federico Fellini paid tribute to him in his 1960 film La Dolce Vita, which featured Morandi's paintings, as does La notte by Michelangelo Antonioni. One of the main characters in Sarah Hall's novel How to Paint a Dead Man is loosely based on Morandi. [8] Don DeLillo's 9/11 novel " Falling Man" (2007) includes two Morandi still-life paintings on the wall of Nina's New York apartment, as well as "a show of Morandi paintings at a gallery in Chelsea" at the beginning of Chapter 12. Morandi was a particular favorite of eccentric Scottish poet Ivor Cutler, who included a poem about the painter in his first anthology Many Flies Have Feathers (1973)

Two oil paintings by Morandi were chosen by the President of the United States Barack Obama in 2009 and are now part of the White House collection.

In 1993 Franco Solmi, at the time director of Galleria d'Arte Moderna in Bologna, together with Bologna Municipality created the Giorgio Morandi Museum, with a donation made by his sister Maria Teresa Morandi, of his works and his atelier, which were owned by the family. Today the museum includes a reconstruction of his studio.

Although Morandi was not greatly concerned with exhibitions during his own lifetime, his works have been displayed in the Museo d'Arte Moderna di Bologna (MAMbo) and in many other cities, due also to the Centro Studi Giorgio Morandi and its president Marilena Pasquali who has contributed to the foundation of the Museo Morandi [ it] in Bologna in 1993 together with Franco Solmi at the time director of the museum of modern art – Galleria d’Arte Moderna – in Bologna. From April 30, 1998, the exhibition "The Later Morandi. Still Lifes 1950-1964", curated by Laura Mattioli Rossi, was inaugurated at the Peggy Guggenheim Museum in Venice, at first held at Galleria dello Scudo, Verona, in winter 1997–1998.

In December 2008 an exhibition dedicated to Morandi was held at the Metropolitan Museum of Art in New York. Twenty-one works were shown at the Museo Fortuny in Venice in 2010 curated by the director Daniela Ferretti and Franco Calarota [9] From 7 June until 22 September 2013, a Morandi exhibition was held at the Centre for Fine Arts in Brussels, Belgium (with guest artist Luc Tuymans).

In 2014–15 Ettore Spalletti exhibited his works in dialogue with Morandi's at Galleria d'Arte Maggiore g.a.m. in Bologna. A show curated by Franco and Roberta Calarota. In 2015 David Zwirner Gallery had an exhibition of Morandi's work in New York. [10] Between October 9 and June 25, 2016, the Center for Italian Modern Art in New York, held an exhibition featuring paintings, etchings and drawings by Morandi. [11] From May 19 to July 4, 2021, an exhibition dedicated to Morandi takes place at the Museum of Grenoble. [12]

As subject of photography

The filmmaker Tacita Dean filmed the inside of Morandi's house on via Fondazza. An exhibition of stills from one of the two films, Still Life, was held at the Center for Italian Modern Art, in New York, in 2016. [13]

In 2016 the American photographer Joel Meyerowitz published Morandi's Objects, a book with photographs of more than 260 objects that the painter had collected during his life. [14]