Sir George William John Benjamin, CBE (born 31 January 1960) is an English composer of contemporary classical music. He is also a conductor, pianist and teacher. He is well known for operas Into the Little Hill (2006), Written on Skin (2009–2012) and Lessons in Love and Violence (2015–2017)—all with librettos by Martin Crimp. In 2019, critics at The Guardian ranked Written on Skin as the second best work of the 21st-century. [1]

Benjamin was born in London and attended Westminster School. He began composing from the age of seven, and took piano and composition lessons with Peter Gellhorn until the age of 15, [2] after which Gellhorn arranged for Benjamin to continue his lessons in Paris with Olivier Messiaen, whom he had known for many years. [3] Messiaen was reported to have described Benjamin as his favourite pupil. [4] He then read music at King's College, Cambridge, studying under Alexander Goehr and Robin Holloway.

His orchestral piece Ringed by the Flat Horizon (written for the Cambridge University Musical Society and premiered in Cambridge under the baton of Mark Elder on 5 March 1980) was performed at The Proms that August, while he was still a student, making him the youngest living composer to have had music performed at the Proms. [5] The London Sinfonietta and Sir Simon Rattle, premiered At First Light two years later. [6] Antara was commissioned by IRCAM for the 10th anniversary of the Pompidou Centre in 1987 [7] and Three Inventions for chamber orchestra were written for the 75th Salzburg Festival in 1995. [8] The London Symphony Orchestra under Pierre Boulez premiered Palimpsests in 2002 to mark the opening of ‘By George’, a season-long portrait which included the first performance of Shadowlines by Pierre-Laurent Aimard. [9] More recent celebrations of Benjamin's work have taken place at Southbank Centre in 2012 (as part of the UK's Cultural Olympiad) and at the Barbican in 2016. [10] [11] 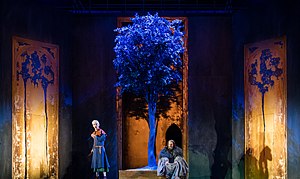 As a conductor, he regularly appears with some of the world's leading ensembles and orchestras, amongst them the London Sinfonietta, Ensemble Modern, the Cleveland and Concertgebouw orchestras, and the Junge Deutsche Philharmonie. [14] [15] In 1999, he made his operatic debut conducting Pelléas et Mélisande at la Monnaie, Brussels, [16] and he has conducted numerous world premieres, including works by Wolfgang Rihm, Unsuk Chin, Gérard Grisey, and György Ligeti. [17] [18] [19] In 1993, he curated the first Meltdown music festival in London and in 2010 he was the Music Director of the Ojai Music Festival in California. [20] During the 2018/2019 season, Benjamin was Composer in Residence to the Berliner Philharmoniker. [21]

In 2019, Benjamin was awarded the Golden Lion Award for lifetime achievement from the Venice Biennale. Other awards include the 2001 Arnold Schönberg Prize, [23] and the 2015 Prince Pierre of Monaco composition prize (for his opera Written on Skin). [24] An honorary fellow of King's College Cambridge, the Guildhall School of Music and Drama, the Royal College of Music and the Royal Academy of Music, [25] Benjamin is also an Honorary Member of the Royal Philharmonic Society. [26] He was awarded a C.B.E. in 2010, [27] made a Commandeur de l’Ordre des Arts et des Lettres in 2015, [28] and was knighted in the 2017 Queen's Birthday Honours. [29]

Benjamin now lives in northwest London with his partner, the filmmaker Michael Waldman, whose recent credits include The Day John Lennon Died, The Scandalous Adventures of Lord Byron, and the TV miniseries Musicality.