From Wikipedia, the free encyclopedia
Branch of mathematics studying (smooth) functions of manifolds
For other uses, see Geometric topology (disambiguation). 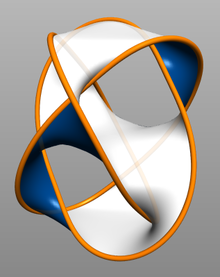 A Seifert surface bounded by a set of Borromean rings; these surfaces can be used as tools in geometric topology

In mathematics, geometric topology is the study of manifolds and maps between them, particularly embeddings of one manifold into another.

Manifolds differ radically in behavior in high and low dimension.

The precise reason for the difference at dimension 5 is because the Whitney embedding theorem, the key technical trick which underlies surgery theory, requires 2+1 dimensions. Roughly, the Whitney trick allows one to "unknot" knotted spheres – more precisely, remove self-intersections of immersions; it does this via a homotopy of a disk – the disk has 2 dimensions, and the homotopy adds 1 more – and thus in codimension greater than 2, this can be done without intersecting itself; hence embeddings in codimension greater than 2 can be understood by surgery. In surgery theory, the key step is in the middle dimension, and thus when the middle dimension has codimension more than 2 (loosely, 2½ is enough, hence total dimension 5 is enough), the Whitney trick works. The key consequence of this is Smale's h-cobordism theorem, which works in dimension 5 and above, and forms the basis for surgery theory.

A modification of the Whitney trick can work in 4 dimensions, and is called Casson handles – because there are not enough dimensions, a Whitney disk introduces new kinks, which can be resolved by another Whitney disk, leading to a sequence ("tower") of disks. The limit of this tower yields a topological but not differentiable map, hence surgery works topologically but not differentiably in dimension 4.

A manifold is orientable if it has a consistent choice of orientation, and a connected orientable manifold has exactly two different possible orientations. In this setting, various equivalent formulations of orientability can be given, depending on the desired application and level of generality. Formulations applicable to general topological manifolds often employ methods of homology theory, whereas for differentiable manifolds more structure is present, allowing a formulation in terms of differential forms. An important generalization of the notion of orientability of a space is that of orientability of a family of spaces parameterized by some other space (a fiber bundle) for which an orientation must be selected in each of the spaces which varies continuously with respect to changes in the parameter values. 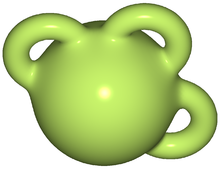 A 3-ball with three 1-handles attached.

A handle decomposition of an m- manifold M is a union

by the attaching of

of x such that the topological pair

is homeomorphic to the pair

, with a standard inclusion of

as a subspace of

. That is, there exists a homeomorphism

such that the image of

The generalized Schoenflies theorem states that, if an (n − 1)-dimensional sphere S is embedded into the n-dimensional sphere Sn in a locally flat way (that is, the embedding extends to that of a thickened sphere), then the pair (Sn, S) is homeomorphic to the pair (Sn, Sn−1), where Sn−1 is the equator of the n-sphere. Brown and Mazur received the Veblen Prize for their independent proofs [2] [3] of this theorem.

each have their own theory, where there are some connections.

2-dimensional topology can be studied as complex geometry in one variable (Riemann surfaces are complex curves) – by the uniformization theorem every conformal class of metrics is equivalent to a unique complex one, and 4-dimensional topology can be studied from the point of view of complex geometry in two variables (complex surfaces), though not every 4-manifold admits a complex structure.

Knot theory is the study of mathematical knots. While inspired by knots which appear in daily life in shoelaces and rope, a mathematician's knot differs in that the ends are joined together so that it cannot be undone. In mathematical language, a knot is an embedding of a circle in 3-dimensional Euclidean space, R3 (since we're using topology, a circle isn't bound to the classical geometric concept, but to all of its homeomorphisms). Two mathematical knots are equivalent if one can be transformed into the other via a deformation of R3 upon itself (known as an ambient isotopy); these transformations correspond to manipulations of a knotted string that do not involve cutting the string or passing the string through itself.

To gain further insight, mathematicians have generalized the knot concept in several ways. Knots can be considered in other three-dimensional spaces and objects other than circles can be used; see knot (mathematics). Higher-dimensional knots are n-dimensional spheres in m-dimensional Euclidean space.

In high-dimensional topology, characteristic classes are a basic invariant, and surgery theory is a key theory.

A characteristic class is a way of associating to each principal bundle on a topological space X a cohomology class of X. The cohomology class measures the extent to which the bundle is "twisted" — particularly, whether it possesses sections or not. In other words, characteristic classes are global invariants which measure the deviation of a local product structure from a global product structure. They are one of the unifying geometric concepts in algebraic topology, differential geometry and algebraic geometry.

Surgery theory is a collection of techniques used to produce one manifold from another in a 'controlled' way, introduced by Milnor ( 1961). Surgery refers to cutting out parts of the manifold and replacing it with a part of another manifold, matching up along the cut or boundary. This is closely related to, but not identical with, handlebody decompositions. It is a major tool in the study and classification of manifolds of dimension greater than 3.

More technically, the idea is to start with a well-understood manifold M and perform surgery on it to produce a manifold M ′ having some desired property, in such a way that the effects on the homology, homotopy groups, or other interesting invariants of the manifold are known.

The classification of exotic spheres by Kervaire and Milnor ( 1963) led to the emergence of surgery theory as a major tool in high-dimensional topology.