From Wikipedia
https://en.wikipedia.org/wiki/Galina_Ulanova
Russian ballet dancer
In this name that follows Eastern Slavic naming conventions, the patronymic is Sergeyevna and the family name is Ulanova.

Galina Sergeyevna Ulanova ( Russian: Галина Сергеевна Уланова, pronounced  [ɡɐˈlʲinə ʊˈlanəvə]; 8 January 1910 [ O.S. 26 December 1909]  – 21 March 1998) was a Russian ballet dancer. She is frequently cited as being one of the greatest ballerinas of the 20th century. 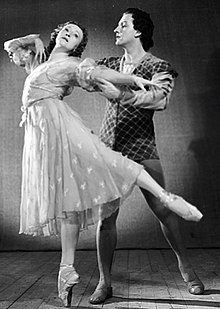 Ulanova with Yuri Zhdanov in Romeo and Juliet

Ulanova was born in Saint Petersburg, Russia. Both parents were the soloists of the Mariinsky theatre and danced with Anna Pavlova. Later, her father became a director and her mother taught ballet. Ulanova recalled that she 'never had a choice to pick a career' and due to her parents' profession, ballet was her only option. As a child she dreamed of becoming a sailor, saying she feared having the life of artists with lots of labour and no sleep. Nevertheless, her parents sent her to ballet school at a very young age, where she studied under Agrippina Vaganova and her own mother. [1]

When she joined the Mariinsky Theatre in 1928, the press found in her "much of Semyonova's style, grace, the same exceptional plasticity and a sort of captivating modesty in her gestures". [2] Konstantin Stanislavsky, fascinated with her acting style, implored her to take part in his stage productions. In 1944, when her fame reached Joseph Stalin, he had her transferred to the Bolshoi Theatre, where she would be the prima ballerina assoluta for 16 years. The following year, she danced the title role in the world premiere of Sergei Prokofiev's Cinderella.

Ulanova was regarded as a great actress as well as a dancer, and when she was finally allowed to tour abroad at the age of 46, enraptured British papers wrote that "Galina Ulanova in London knew the greatest triumph of any individual dancer since Anna Pavlova". Having retired from the stage at the age of 50, she coached many generations of Russian dancers.

Ulanova was one of the few dancers to be awarded Hero of Socialist Labour and the only one to receive this honour twice. She was also awarded the highest exclusively artistic national title, People's Artist of the USSR. [3] and she was awarded the Stalin Prize in 1941, 1946, 1947, 1950, and the Lenin Prize in 1957. She was elected a Foreign Honorary Member of the American Academy of Arts and Sciences in 1960. [4]

Ulanova's apartment in one of Moscow's Seven Sisters, the Kotelnicheskaya Embankment Building, is preserved now as a memorial museum. Monuments to Ulanova were erected in Saint Petersburg and Stockholm. 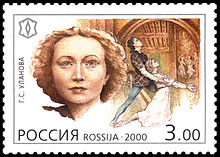 Ulanova on a Russian 3-ruble postage stamp issued in 2000.

Ulanova is portrayed by Aliya Tanikpaeva (billed as "Aliya Tanykpayeva") in a non-speaking role in episode 1 of season 2 of the Netflix series The Crown. [6]

She was earlier played by Cyd Charisse in the Hollywood film Mission to Moscow (1943).