From Wikipedia
https://en.wikipedia.org/wiki/Fundamental_theorem_of_calculus
Relationship between derivatives and integrals

The first part of the theorem, sometimes called the first fundamental theorem of calculus, states that one of the antiderivatives (also known as an indefinite integral), say F, of some function f may be obtained as the integral of f with a variable bound of integration. This implies the existence of antiderivatives for continuous functions. [1]

Conversely, the second part of the theorem, sometimes called the second fundamental theorem of calculus, states that the integral of a function f over some interval can be computed by using any one, say F, of its infinitely many antiderivatives. This part of the theorem has key practical applications, because explicitly finding the antiderivative of a function by symbolic integration avoids numerical integration to compute integrals.

The fundamental theorem of calculus relates differentiation and integration, showing that these two operations are essentially inverses of one another. Before the discovery of this theorem, it was not recognized that these two operations were related. Ancient Greek mathematicians knew how to compute area via infinitesimals, an operation that we would now call integration. The origins of differentiation likewise predate the fundamental theorem of calculus by hundreds of years; for example, in the fourteenth century the notions of continuity of functions and motion were studied by the Oxford Calculators and other scholars. The historical relevance of the fundamental theorem of calculus is not the ability to calculate these operations, but the realization that the two seemingly distinct operations (calculation of geometric areas, and calculation of gradients) are actually closely related.

The first published statement and proof of a rudimentary form of the fundamental theorem, strongly geometric in character, [2] was by James Gregory (1638–1675). [3] [4] Isaac Barrow (1630–1677) proved a more generalized version of the theorem, [5] while his student Isaac Newton (1642–1727) completed the development of the surrounding mathematical theory. Gottfried Leibniz (1646–1716) systematized the knowledge into a calculus for infinitesimal quantities and introduced the notation used today. 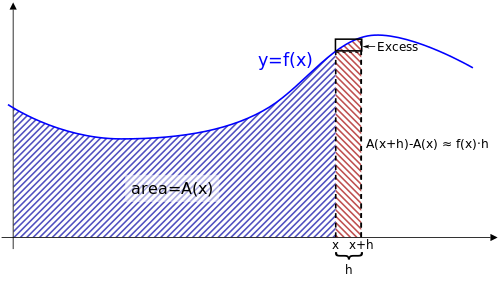 The area shaded in red stripes is close to h times f(x). Alternatively, if the function A(x) were known, this area would be exactly A(x + h) − A(x). These two values are approximately equal, particularly for small h.

For a continuous function y = f(x) whose graph is plotted as a curve, each value of x has a corresponding area function A(x), representing the area beneath the curve between 0 and x. The function A(x) may not be known, but it is given that it represents the area under the curve.

There is another way to estimate the area of this same strip. As shown in the accompanying figure, h is multiplied by f(x) to find the area of a rectangle that is approximately the same size as this strip. So:

In fact, this estimate becomes a perfect equality if we add the red portion of the "excess" area shown in the diagram. So:

As h approaches 0 in the limit, the last fraction can be shown to go to zero. [6] This is true because the area of the red portion of excess region is less than or equal to the area of the tiny black-bordered rectangle. More precisely,

Intuitively, the theorem states that the sum of infinitesimal changes in a quantity over time (or over some other variable) adds up to the net change in the quantity.

Imagine, for example, using a stopwatch to mark off tiny increments of time as a car travels down a highway. Imagine also looking at the car's speedometer as it travels, so that at every moment you know the velocity of the car. To understand the power of this theorem, imagine also that you are not allowed to look out of the window of the car, so that you have no direct evidence of how far the car has traveled.

Now imagine doing this instant after instant, so that for every tiny interval of time you know how far the car has traveled. In principle, you could then calculate the total distance traveled in the car (even though you never looked out of the window) by summing-up all those tiny distances.

the velocity at any instant

a tiny interval of time

On the right hand side of this equation, as

becomes infinitesimally small, the operation of "summing up" corresponds to integration. So what we've shown is that the integral of the velocity function can be used to compute how far the car has traveled.

In other words, in terms of one's physical intuition, the theorem states that the sum of the changes in a quantity over time (such as position, as calculated by multiplying velocity times time) adds up to the total net change in the quantity. Or to put this more generally:

meaning that one can recover the original function

by integrating its derivative, the velocity

This part is sometimes referred to as the first fundamental theorem of calculus. [7]

Then F is uniformly continuous on [a, b] and differentiable on the open interval (a, b), and

for which an antiderivative

is known. Specifically, if

is a real-valued continuous function on

is an antiderivative of

The corollary assumes continuity on the whole interval. This result is strengthened slightly in the following part of the theorem.

This part is sometimes referred to as the second fundamental theorem of calculus [8] or the Newton–Leibniz axiom.

be a real-valued function on a closed interval

is Riemann integrable on

exists, then there are infinitely many antiderivatives for

, obtained by adding an arbitrary constant to

. Also, by the first part of the theorem, antiderivatives of

Proof of the first part

For a given f(t), define the function F(x) as

The sum of the areas of two adjacent regions is equal to the area of both regions combined, thus:

Substituting the above into (1) results in

According to the mean value theorem for integration, there exists a real number

To keep the notation simple, we write just

, but one should keep in mind that, for a given function

but is always confined to the interval

. Substituting the above into (2) we get

Dividing both sides by

The expression on the left side of the equation is Newton's difference quotient for F at x1.

Take the limit as

→ 0 on both sides of the equation.

The expression on the left side of the equation is the definition of the derivative of F at x1.

Therefore, according to the squeeze theorem,

The function f is continuous at x1, the limit can be taken inside the function:

Substituting into (3), we get

which completes the proof. [9]

Proof of the corollary

Suppose F is an antiderivative of f, with f continuous on [a, b]. Let

Proof of the second part

Now, we add each F(xi) along with its additive inverse, so that the resulting quantity is equal:

The above quantity can be written as the following sum:

Next, we employ the mean value theorem. Stated briefly,

Let F be continuous on the closed interval [a, b] and differentiable on the open interval (a, b). Then there exists some c in (a, b) such that

Substituting the above into (1), we get

can be expressed as

A converging sequence of Riemann sums. The number in the upper left is the total area of the blue rectangles. They converge to the definite integral of the function.

We are describing the area of a rectangle, with the width times the height, and we are adding the areas together. Each rectangle, by virtue of the mean value theorem, describes an approximation of the curve section it is drawn over. Also

need not be the same for all values of i, or in other words that the width of the rectangles can differ. What we have to do is approximate the curve with n rectangles. Now, as the size of the partitions get smaller and n increases, resulting in more partitions to cover the space, we get closer and closer to the actual area of the curve.

So, we take the limit on both sides of (2). This gives us

Neither F(b) nor F(a) is dependent on

The expression on the right side of the equation defines the integral over f from a to b. Therefore, we obtain

which completes the proof.

It almost looks like the first part of the theorem follows directly from the second. That is, suppose G is an antiderivative of f. Then by the second theorem,

As an example, suppose the following is to be calculated:

and we can use

as the antiderivative. Therefore:

Or, more generally, suppose that

is to be calculated. Here,

can be used as the antiderivative. Therefore:

As a theoretical example, the theorem can be used to prove that

the result follows from,

The function f does not have to be continuous over the whole interval. Part I of the theorem then says: if f is any Lebesgue integrable function on [a, b] and x0 is a number in [a, b] such that f is continuous at x0, then

is differentiable for x = x0 with F′(x0) = f(x0). We can relax the conditions on f still further and suppose that it is merely locally integrable. In that case, we can conclude that the function F is differentiable almost everywhere and F′(x) = f(x) almost everywhere. On the real line this statement is equivalent to Lebesgue's differentiation theorem. These results remain true for the Henstock–Kurzweil integral, which allows a larger class of integrable functions. [10]

In higher dimensions Lebesgue's differentiation theorem generalizes the Fundamental theorem of calculus by stating that for almost every x, the average value of a function f over a ball of radius r centered at x tends to f(x) as r tends to 0.

This result may fail for continuous functions F that admit a derivative f(x) at almost every point x, as the example of the Cantor function shows. However, if F is absolutely continuous, it admits a derivative F′(x) at almost every point x, and moreover F′ is integrable, with F(b) − F(a) equal to the integral of F′ on [a, b]. Conversely, if f is any integrable function, then F as given in the first formula will be absolutely continuous with F′ = f a.e.

The version of Taylor's theorem, which expresses the error term as an integral, can be seen as a generalization of the fundamental theorem.

There is a version of the theorem for complex functions: suppose U is an open set in C and f : U → C is a function that has a holomorphic antiderivative F on U. Then for every curve γ : [a, b] → U, the curve integral can be computed as

The fundamental theorem can be generalized to curve and surface integrals in higher dimensions and on manifolds. One such generalization offered by the calculus of moving surfaces is the time evolution of integrals. The most familiar extensions of the fundamental theorem of calculus in higher dimensions are the divergence theorem and the gradient theorem.

One of the most powerful generalizations in this direction is Stokes' theorem (sometimes known as the fundamental theorem of multivariable calculus): [13] Let M be an oriented piecewise smooth manifold of dimension n and let

be a smooth compactly supported (n – 1)-form on M. If ∂M denotes the boundary of M given its induced orientation, then

Here d is the exterior derivative, which is defined using the manifold structure only.

The theorem is often used in situations where M is an embedded oriented submanifold of some bigger manifold (e.g. Rk) on which the form

The fundamental theorem of calculus allows us to pose a definite integral as a first-order ordinary differential equation.

can be posed as

as the value of the integral.