The idea of adding a fourth dimension began with Jean le Rond d'Alembert's "Dimensions" being published in 1754, [1] [2] was followed by Joseph-Louis Lagrange in the mid-1700s, and culminated in a precise formalization of the concept in 1854 by Bernhard Riemann. In 1880, Charles Howard Hinton popularized these insights in an essay titled " What is the Fourth Dimension?", which explained the concept of a " four-dimensional cube" with a step-by-step generalization of the properties of lines, squares, and cubes. The simplest form of Hinton's method is to draw two ordinary 3D cubes in 2D space, one encompassing the other, separated by an "unseen" distance, and then draw lines between their equivalent vertices. This can be seen in the accompanying animation whenever it shows a smaller inner cube inside a larger outer cube. The eight lines connecting the vertices of the two cubes in this case represent a single direction in the "unseen" fourth dimension.

Higher-dimensional spaces (i.e., greater than three) have since become one of the foundations for formally expressing modern mathematics and physics. Large parts of these topics could not exist in their current forms without the use of such spaces. Einstein's concept of spacetime uses such a 4D space, though it has a Minkowski structure that is slightly more complicated than Euclidean 4D space.

Single locations in 4D space can be given as vectors or n-tuples, i.e., as ordered lists of numbers such as (x, y, z, w). It is only when such locations are linked together into more complicated shapes that the full richness and geometric complexity of higher-dimensional spaces emerge. A hint to that complexity can be seen in the accompanying 2D animation of one of the simplest possible 4D objects, the tesseract (equivalent to the 3D cube; see also hypercube).

Lagrange wrote in his Mécanique analytique (published 1788, based on work done around 1755) that mechanics can be viewed as operating in a four-dimensional space — three dimensions of space, and one of time. [3] In 1827, Möbius realized that a fourth dimension would allow a three-dimensional form to be rotated onto its mirror-image; [4]: 141  by 1853, Ludwig Schläfli had discovered all the regular polytopes that exist in higher dimensions, including the four-dimensional analogues of the Platonic solids, but his work was not published until after his death. [4]: 142–143  Higher dimensions were soon put on firm footing by Bernhard Riemann's 1854 thesis, Über die Hypothesen welche der Geometrie zu Grunde liegen, in which he considered a "point" to be any sequence of coordinates (x1, ..., xn). The possibility of geometry in higher dimensions, including four dimensions in particular, was thus established.

An arithmetic of four dimensions, called quaternions, was defined by William Rowan Hamilton in 1843. This associative algebra was the source of the science of vector analysis in three dimensions as recounted in A History of Vector Analysis. Soon after, tessarines and coquaternions were introduced as other four-dimensional algebras over R.

One of the first major expositors of the fourth dimension was Charles Howard Hinton, starting in 1880 with his essay What is the Fourth Dimension?, published in the Dublin University magazine. [5] He coined the terms tesseract, ana and kata in his book A New Era of Thought and introduced a method for visualising the fourth dimension using cubes in the book Fourth Dimension. [6] [7]

Hinton's ideas inspired a fantasy about a "Church of the Fourth Dimension" featured by Martin Gardner in his January 1962 " Mathematical Games column" in Scientific American. In 1886, Victor Schlegel described [8] his method of visualizing four-dimensional objects with Schlegel diagrams.

In 1908, Hermann Minkowski presented a paper [9] consolidating the role of time as the fourth dimension of spacetime, the basis for Einstein's theories of special and general relativity. [10] But the geometry of spacetime, being non-Euclidean, is profoundly different from that explored by Schläfli and popularised by Hinton. The study of Minkowski space required new mathematics quite different from that of four-dimensional Euclidean space, and so developed along quite different lines. This separation was less clear in the popular imagination, with works of fiction and philosophy blurring the distinction, so in 1973 H. S. M. Coxeter felt compelled to write:

Comparatively, four-dimensional space has an extra coordinate axis, orthogonal to the other three, which is usually labeled w. To describe the two additional cardinal directions, Charles Howard Hinton coined the terms ana and kata, from the Greek words meaning "up toward" and "down from", respectively.[ citation needed]

As mentioned above, Hermann Minkowski exploited the idea of four dimensions to discuss cosmology including the finite velocity of light. In appending a time dimension to three dimensional space, he specified an alternative perpendicularity, hyperbolic orthogonality. This notion provides his four-dimensional space with a modified simultaneity appropriate to electromagnetic relations in his cosmos. Minkowski's world overcame problems associated with the traditional absolute space and time cosmology previously used in a universe of three space dimensions and one time dimension.

Research using virtual reality finds that humans, in spite of living in a three-dimensional world, can, without special practice, make spatial judgments about line segments embedded in four-dimensional space, based on their length (one dimensional) and the angle (two dimensional) between them. [13] The researchers noted that "the participants in our study had minimal practice in these tasks, and it remains an open question whether it is possible to obtain more sustainable, definitive, and richer 4D representations with increased perceptual experience in 4D virtual environments". [13] In another study, [14] the ability of humans to orient themselves in 2D, 3D, and 4D mazes has been tested. Each maze consisted of four path segments of random length and connected with orthogonal random bends, but without branches or loops (i.e. actually labyrinths). The graphical interface was based on John McIntosh's free 4D Maze game. [15] The participating persons had to navigate through the path and finally estimate the linear direction back to the starting point. The researchers found that some of the participants were able to mentally integrate their path after some practice in 4D (the lower-dimensional cases were for comparison and for the participants to learn the method). 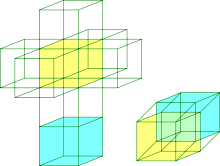 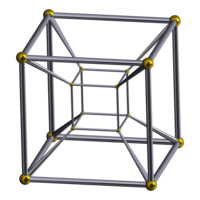 People have a spatial self-perception as beings in a three-dimensional space, but are visually restricted to one dimension less: the eye sees the world as a projection to two dimensions, on the surface of the retina. Assuming a four-dimensional being were able to see the world in projections to a hypersurface, also just one dimension less, i.e., to three dimensions, it would be able to see, e.g., all six faces of an opaque box simultaneously, and in fact, what is inside the box at the same time, just as people can see all four sides and simultaneously the interior of a rectangle on a piece of paper.[ citation needed] The being would be able to discern all points in a 3-dimensional subspace simultaneously, including the inner structure of solid 3-dimensional objects, things obscured from human viewpoints in three dimensions on two-dimensional projections. Brains receive images in two dimensions and use reasoning to help picture three-dimensional objects.

Reasoning by analogy from familiar lower dimensions can be an excellent intuitive guide, but care must be exercised not to accept results that are not more rigorously tested. For example, consider the formulas for the area of a circle (

) and the volume of a sphere (

). One might guess that the volume of the 3-sphere in four-dimensional space is

, but neither of these is right. The actual formula is

Wikibooks has a book on the topic of: Special Relativity
Retrieved from " https://en.wikipedia.org/?title=Four-dimensional_space&oldid=1125226891"
Categories:
Hidden categories: