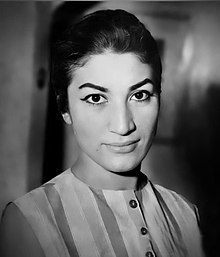 Forugh Farrokhzad was born in Tehran in 1935, to career military officer Colonel Mohammad Bagher Farrokhzad (originally from Tafresh city) and his wife Touran Vaziri-Tabar. The third of seven children (Amir, Massoud, Mehrdad, Fereydoun, Pooran, Gloria), she attended school until the ninth grade, then was taught painting and sewing at a girls' school for the manual arts. At the age of 16, she was married to satirist Parviz Shapour. She continued her education with painting and sewing classes and moved with her husband to Ahvaz. Her only child, a son named Kamyar Shapour (subject of The Return), was born a year later.

"After her separation, and later her divorce (1954), from Parviz, she loses custody of her son because she has had several affairs. Her son Kamyar, whom she affectionately calls Kami, is taken away from her and brought up by Parviz and his family. Forugh is given very few visiting rights, and the child is brought up with the impression that his mother has abandoned him for poetry and the pursuit of her sexual pleasures. The thought of her son thinking that she willingly abandoned him, is a source of great sorrow and constant torment for her." [7]

Farrokhzad spent nine months in Europe in 1958. After returning to Iran, in search of a job she met filmmaker and writer Ebrahim Golestan, who reinforced her own inclinations to express herself and live independently, and with whom she began a love affair. [8] She published two more volumes, The Wall and The Rebellion, before traveling to Tabriz to make a film about Iranians affected by leprosy. This 1962 documentary film, titled The House is Black, is considered to be an essential part of the Iranian New Wave movement. [9] During the 12 days of shooting, she became attached to Hossein Mansouri, the child of two lepers. She adopted the boy and brought him to live at her mother's house.

She published Reborn in 1964. Her poetry at that time varied significantly from former Iranian poetic traditions.

Farrokhzad's strong feminine voice became the focus of much negative attention and open disapproval, both during her lifetime and in posthumous reception of her work.

In a radio interview, when asked about the feminine perspective in her poems, Farrokhzad replied: "If my poems, as you say, have an aspect of femininity, it is of course quite natural. After all, fortunately, I am a woman. But if you speak of artistic merits, I think gender cannot play a role. In fact to even voice such a suggestion is unethical. It is natural that a woman, because of her physical, emotional, and spiritual inclinations, may give certain issues greater attention, issues that men may not normally address. I believe that if those who choose art to express their inner self, feel they have to do so with their gender in mind, they would never progress in their art -- and that is not right. So when I write, if I keep thinking, oh I'm a woman and I must address feminine issues rather than human issues, then that is a kind of stopping and self-destruction. Because what matters, is to cultivate and nourish one's own positive characteristics until one reaches a level worthy of being a human. What is important is the work produced by a human being and not one labeled as a man or a woman. When a poem reaches a certain level of maturation, it separates itself from its creator and connects to a world where it is valid based on its own merits." [10] [11] Emphasizing on human issues, she also calls for a recognition of women's abilities that goes beyond the traditional binary oppositions: [12]

Farrokhzad died in a car accident on February 13, 1967, at the age of 32. [6] Although the exact circumstances of her demise have been the subject of much debate, the official story is that she swerved her jeep to avoid an oncoming school bus and was thrown out of her car, hitting her head against the curb. It was believed she died before reaching the hospital, however, Farzaneh Milani in her book, Forugh Farrokhzad: A Literary Biography With Unpublished Letters / فروغ فرخ زاد: زندگی نامه ادبی همراه با نامه های چاپ نشده (Farsi), cites an interview with Ebrahim Golestan who speaks about Farrokhzad's final moments where she died in his arms. [13] Farrokhzad's poem "Let Us Believe in the Dawn of the Cold Season" [14] was published posthumously, and is considered by some to be one of the best-structured modern poems in Persian. [15] 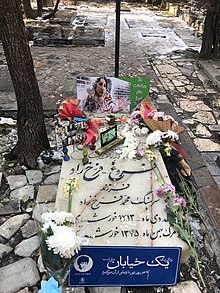 Farrokhzad's poetry was banned for more than a decade after the Islamic Revolution. [4] A brief literary biography of Forough, Michael Hillmann's A lonely woman: Forough Farrokhzad and her poetry, was published in 1987. [5] Farzaneh Milani's work Veils and words: the emerging voices of Iranian women writers (1992) included a chapter about her. Abdolali Dastgheib, literary critic writer, published a critical review of Forough’s poems titled ‘The Little Mermaid’ (Farsi title پری کوچک دریا) (2006) in which he describes Forugh as a pioneer in modern Farsi poetry who symbolises feminism in her work. [16] Nasser Saffarian has directed three documentaries about her life: The Mirror of the Soul (2000), The Green Cold (2003), and Summit of the Wave (2004), and Sholeh Wolpé has written a short biography of Farrokhzad's life in "Sin: Selected Poems of Forugh Farrokhzad" (2007).

In February 2017, on the occasion of the 50th anniversary of Farrokhzad's death, the 94-year-old Golestan broke his silence about his relationship with her, speaking to Saeed Kamali Dehghan of The Guardian. [17] “I rue all the years she isn’t here, of course, that’s obvious,” he said. “We were very close, but I can’t measure how much I had feelings for her. How can I? In kilos? In metres?”

Sholeh Wolpé writes, "Farrokhzad is Iran's most revered female poet. She was a poet of great audacity and extraordinary talent. Her poetry was the poetry of protest-- protest through revelation-- the revelation of the innermost world of women (considered taboo until then), their intimate secrets and desires, their sorrows, longings, aspirations and at times even their articulation through silence. Her poems are still relevant in their advocacy for women’s liberation and independence." [18]

Documentaries and other works 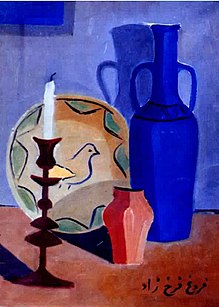