From Wikipedia, the free encyclopedia
Stationery item consisting of a pad of large paper sheets, often used in presentations 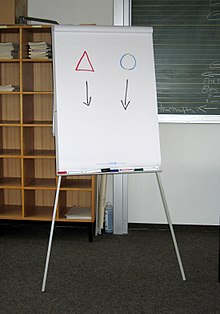 A flip chart is a stationery item consisting of a pad of large paper sheets. It is typically fixed to the upper edge of a whiteboard, or supported on a tripod or four-legged easel. Such charts are commonly used for presentations.

Although most commonly supported on a tripod, flip charts come in various forms. Some of these are:

Text is usually hand written with marker pens and may include figures or charts. A sheet can be flipped over by the presenter to continue to a new page.

Flip charts are used in many different settings such as:

The earliest known patent of a flipchart is from May 8, 1913. [3] Flip charts have being in use from the 1900s, the earliest recorded use of a flip chart is a photo from 1912 of John Henry Patterson (1844-1922), NCR’s CEO while addressing the 100 Point Club standing next to a pair of flip charts on casters. [4] The flipchart we know (on a small whiteboard) was invented by Peter Kent in the 1970s. Peter Kent was the founder and CEO of the visual communications group Nobo plc, and it is believed[ by whom?] that they were the first company to put the large pieces of paper over whiteboards, rather than over other materials.[ citation needed]

Recently,[ when?] scientists have developed a digital self writing flip chart which writes word for word everything it is instructed to record. The disability action group "Armless" has stated that this is a significant step forward for disabilities groups to have conferences like people without disabilities. Also available are flipchart stands that are self heightening.[ citation needed]