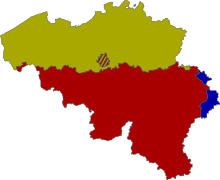 Official languages of Belgium:   Dutch,   French, and   German. Brussels is a bilingual area where both Dutch and French have an official status.

Flemish (Vlaams) [2] [3] [4] is a Low Franconian dialect cluster of the Dutch language. It is sometimes referred to as Flemish Dutch (Vlaams-Nederlands), Belgian Dutch (Belgisch-Nederlands [ˈbɛlɣis ˈneːdərlɑnts] (

listen)), or Southern Dutch (Zuid-Nederlands). Flemish is native to Flanders, a historical region in northern Belgium; it is spoken by Flemings, the dominant ethnic group of the region. [5] [6] [7] [8] Outside of Flanders, it is also spoken to some extent in French Flanders and the Dutch Zeelandic Flanders. [1] [9] [10]

The term Flemish itself has become ambiguous. Nowadays, it is used in at least five ways, depending on the context. These include:

Map showing the historical dialects spoken in the Low Countries. This map does not portray dialect zones of the modern Dutch language family, wherein Dutch and Flemish are distinct varieties of Dutch.

Dutch is the majority language in northern Belgium, being used in written language by three-fifths of the population of Belgium. It is one of the three national languages of Belgium, together with French and German, and is the only official language of the Flemish Region.

The various Dutch dialects spoken in Belgium contain a number of lexical and a good amount of grammatical features that distinguish them from the standard Dutch. Basic Dutch words can have a completely different meaning in Flemish or imply different context. [16] As in the Netherlands, the pronunciation of Standard Dutch is affected by the native dialect of the speaker.

All Dutch dialect groups spoken in Belgium are spoken in adjacent areas of the Netherlands as well. East Flemish forms a continuum with both Brabantic and West Flemish. Standard Dutch is primarily based on the Hollandic dialect  [17] (spoken in the Western provinces of the Netherlands) and to a lesser extent on Brabantian, which is the dominant dialect in Flanders, as well as in the south of the Netherlands.

The supra-regional, semi-standardized colloquial form ( mesolect) of Dutch spoken in Belgium uses the vocabulary and the sound inventory of the Brabantic dialects. It is often called an "in-between-language" or "intermediate language", intermediate between dialects and standard Dutch. [18] Despite its name, Brabantian is the dominant contributor to the Flemish Dutch tussentaal.

It is a relatively new phenomenon that has been gaining popularity during the past decades.[ when?] Some linguists note that it seems to be undergoing a process of (limited) standardisation [19] [20] or that it is evolving into a koiné variety. [21]

Tussentaal is slowly gaining popularity in Flanders[ when?] because it is used a lot in television dramas and comedies. Often, middle-class characters in a television series will be speaking tussentaal, lower-class characters use the dialect of the location where the show is set (such as Western Flanders), and upper-class characters will speak Standard Dutch. [22] That has given tussentaal the status of normalcy in Flanders. It is slowly being accepted by the general population, but it has met with objections from writers and academics who argue that it dilutes the usage of Standard Dutch. [23] Tussentaal is used in entertainment television but rarely in informative programmes (like the news), which normally use Flemish accents with standard Dutch vocabulary.

A belgicism is a word or expression that occurs only in the Belgian variant of Dutch. Some are rarely used, others are used daily and are considered part of the Belgian-Dutch standard language. Many belgicisms are loanwords and words or expressions literally translated from French (also called gallicisms); others, in response, are actually remarkably purist, such as droogzwierder (a compound of Dutch droog "dry" and zwierder "spinner") meaning "spin dryer" (common standard Dutch: centrifuge, a loanword from French), and duimspijker (a compound of Dutch duim "thumb" and spijker "nail") meaning "thumbtack" (common standard Dutch: punaise, a loanword from French). Among the belgicisms, there are also many words that are considered obsolete, formal, or purist in standard Dutch. Moreover, many belgicisms have their origin in the Belgian official nomenclature. For example, misdaad "felony" is not a legal term in the Netherlands, but it is in Belgium.

The word Vlaams itself is derived from flâm, [28] [29] an Ingvaeonic derivation from the Germanic word flaumaz, meaning 'stream; current', (a cognate to English fleam (dialectal) and German Flaum (dialectal)). The name Vlaanderen was formed from a stem flâm-, with a suffix -ðr- attached. [30]