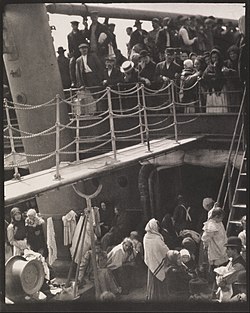 Alfred Stieglitz's photograph The Steerage (1907) was an early work of artistic modernism, and considered by many historians to be the most important photograph ever made. [1] Stieglitz was notable for introducing fine art photography into museum collections. 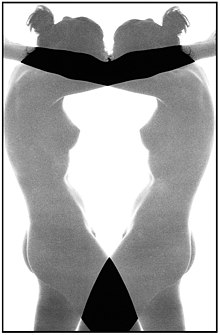 Depiction of nudity has been one of the dominating themes in fine-art photography. Nude composition 19 from 1988 by Jaan Künnap.

One photography historian claimed that "the earliest exponent of 'Fine Art' or composition photography was John Edwin Mayall", who exhibited daguerreotypes illustrating the Lord's Prayer in 1851. [2] Successful attempts to make fine art photography can be traced to Victorian era practitioners such as Julia Margaret Cameron, Charles Lutwidge Dodgson, and Oscar Gustave Rejlander and others. In the U.S. F. Holland Day, Alfred Stieglitz and Edward Steichen were instrumental in making photography a fine art, and Stieglitz was especially notable in introducing it into museum collections.

In the UK as recently as 1960, photography was not really recognised as a Fine Art. Dr S. D. Jouhar said, when he formed the Photographic Fine Art Association at that time: "At the moment photography is not generally recognized as anything more than a craft. In the USA photography has been openly accepted as Fine Art in certain official quarters. It is shown in galleries and exhibitions as an Art. There is not corresponding recognition in this country. The London Salon shows pictorial photography, but it is not generally understood as an art. Whether a work shows aesthetic qualities or not it is designated 'Pictorial Photography' which is a very ambiguous term. The photographer himself must have confidence in his work and in its dignity and aesthetic value, to force recognition as an Art rather than a Craft".[ quote citation needed]

Until the late 1970s several genres predominated, such as nudes, portraits, and natural landscapes (exemplified by Ansel Adams). Breakthrough 'star' artists in the 1970s and 80s, such as Sally Mann, Robert Mapplethorpe, Robert Farber and Cindy Sherman, still relied heavily on such genres, although seeing them with fresh eyes. Others investigated a snapshot aesthetic approach.

American organizations, such as the Aperture Foundation and the Museum of Modern Art(MoMA), have done much to keep photography at the forefront of the fine arts. MoMA's establishment of a department of photography in 1940 and appointment of Beaumont Newhall as its first curator are often cited as institutional confirmation of photography's status as an art. [3] 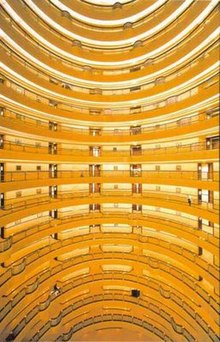 There is now a trend toward a careful staging and lighting of the picture, rather than hoping to "discover" it ready-made. Photographers such as Gregory Crewdson, and Jeff Wall are noted for the quality of their staged pictures. Additionally, new technological trends in digital photography have opened a new direction in full spectrum photography, where careful filtering choices across the ultraviolet, visible and infrared lead to new artistic visions. 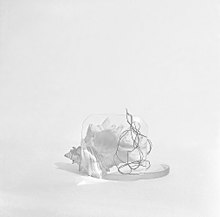 As printing technologies have improved since around 1980, a photographer's art prints reproduced in a finely-printed limited-edition book have now become an area of strong interest to collectors. This is because books usually have high production values, a short print run, and their limited market means they are almost never reprinted. The collector's market in photography books by individual photographers is developing rapidly.

According to Art Market Trends 2004 7,000 photographs were sold in auction rooms in 2004, and photographs averaged a 7.6 percent annual price rise from 1994 and 2004. [4][ failed verification] Around 80 percent were sold in the United States. Of course, auction sales only record a fraction of total private sales. There is now a thriving collectors' market for which the most sought-after art photographers will produce high quality archival prints in strictly limited editions. Attempts by online art retailers to sell fine photography to the general public alongside prints of paintings have had mixed results, with strong sales coming only from the traditional "big names" of photography such as Ansel Adams.

In addition to the "digital movement" towards manipulation, filtering, or resolution changes, some fine artists deliberately seek a "naturalistic," including "natural lighting" as a value in itself. Sometimes the art work as in the case of Gerhard Richter consists of a photographic image that has been subsequently painted over with oil paints and/or contains some political or historical significance beyond the image itself. The existence of "photographically-projected painting" now blurs the line between painting and photography which traditionally was absolute.

Until the mid-1950s it was widely considered vulgar and pretentious to frame a photograph for a gallery exhibition. Prints were usually simply pasted onto blockboard or plywood, or given a white border in the darkroom and then pinned at the corners onto display boards. Prints were thus shown without any glass reflections obscuring them. Steichen's famous The Family of Man exhibition was unframed, the pictures pasted to panels. Even as late as 1966 Bill Brandt's MoMA show was unframed, with simple prints pasted to thin plywood. From the mid-1950s to about 2000 most gallery exhibitions had prints behind glass. Since about 2000 there has been a noticeable move toward once again showing contemporary gallery prints on boards and without glass. In addition, throughout the twentieth century, there was a noticeable increase in the size of prints. 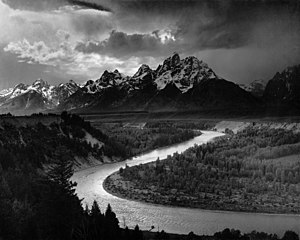 Ansel Adams' The Tetons and the Snake River (1942)

Fine art photography is created primarily as an expression of the artist's vision, but as a byproduct it has also been important in advancing certain causes. The work of Ansel Adams in Yosemite and Yellowstone provides an example. Adams is one of the most widely recognized fine art photographers of the 20th century, and was an avid promoter of conservation. While his primary focus was on photography as art, some of his work raised public awareness of the beauty of the Sierra Nevada and helped to build political support for their protection.

Such photography has also had effects in the area of censorship law and free expression, due to its concern with the nude body.

Overlap with other genres

Although fine art photography may overlap with many other genres of photography, the overlaps with fashion photography and photojournalism merit special attention.

Photojournalism and fine art photography overlapped beginning in the "late 1960s and 1970s, when... news photographers struck up liaisons with art photography and painting". [12] In 1974 the International Center of Photography opened, with emphases on both "humanitarian photojournalism" and "art photography". [12] By 1987, "pictures that were taken on assignments for magazines and newspapers now regularly reappear[ed] - in frames - on the walls of museums and galleries". [13]

New smartphone apps such as Snapchat sometimes are used for fine-art photography. [14]

Attitudes of artists in other fields

The reactions of artists and writers have contributed significantly to perceptions of photography as fine art. Prominent painters, such as Francis Bacon and Pablo Picasso, have asserted their interest in the medium:

I have discovered photography. Now I can kill myself. I have nothing else to learn.

I have always been very interested in photography. I have looked at far more photographs than I have paintings. Because their reality is stronger than reality itself.

Noted authors, similarly, have responded to the artistic potential of photography:

...it does seem to me that Capa has proved beyond all doubt that the camera need not be a cold mechanical device. Like the pen, it is as good as the man who uses it. It can be the extension of mind and heart...

Among the definitions that can be found in reference books are:

Among the definitions that can be found in scholarly articles are:

On the World Wide Web

Among the definitions that can be found on the World Wide Web are: