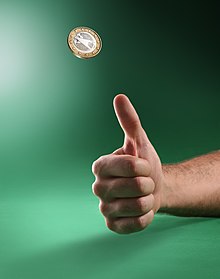 A fair coin, when tossed, should have an equal chance of landing either side up.

In probability theory and statistics, a sequence of independent Bernoulli trials with probability 1/2 of success on each trial is metaphorically called a fair coin. One for which the probability is not 1/2 is called a biased or unfair coin. In theoretical studies, the assumption that a coin is fair is often made by referring to an ideal coin.

John Edmund Kerrich performed experiments in coin flipping and found that a coin made from a wooden disk about the size of a crown and coated on one side with lead landed heads (wooden side up) 679 times out of 1000. [1] In this experiment the coin was tossed by balancing it on the forefinger, flipping it using the thumb so that it spun through the air for about a foot before landing on a flat cloth spread over a table. Edwin Thompson Jaynes claimed that when a coin is caught in the hand, instead of being allowed to bounce, the physical bias in the coin is insignificant compared to the method of the toss, where with sufficient practice a coin can be made to land heads 100% of the time. [2] Exploring the problem of checking whether a coin is fair is a well-established pedagogical tool in teaching statistics.

Role in statistical teaching and theory

The probabilistic and statistical properties of coin-tossing games are often used as examples in both introductory and advanced text books and these are mainly based in assuming that a coin is fair or "ideal". For example, Feller uses this basis to introduce both the idea of random walks and to develop tests for homogeneity within a sequence of observations by looking at the properties of the runs of identical values within a sequence. [3] The latter leads on to a runs test. A time-series consisting of the result from tossing a fair coin is called a Bernoulli process.

Fair results from a biased coin

If a cheat has altered a coin to prefer one side over another (a biased coin), the coin can still be used for fair results by changing the game slightly. John von Neumann gave the following procedure: [4]

The reason this process produces a fair result is that the probability of getting heads and then tails must be the same as the probability of getting tails and then heads, as the coin is not changing its bias between flips and the two flips are independent. This works only if getting one result on a trial doesn't change the bias on subsequent trials, which is the case for most non- malleable coins (but not for processes such as the Pólya urn). By excluding the events of two heads and two tails by repeating the procedure, the coin flipper is left with the only two remaining outcomes having equivalent probability. This procedure only works if the tosses are paired properly; if part of a pair is reused in another pair, the fairness may be ruined. Also, the coin must not be so biased that one side has a probability of zero.

The expected value of flips at the n game

is not hard to calculate, first notice that in step 3 whatever the event

we have flipped the coin twice so

(this can be understood the process being a martingale

where taking the expectation again get us that

but because of the law of total expectation we get that

the further expected number of flips before a successful result.

The more biased our coin is, the more likely it is that we will have to perform a greater number of trials before a fair result.