From Wikipedia, the free encyclopedia
(Redirected from Exchangeable image file format)
Metadata standard in digital images
This article is about a format for storing metadata in image and audio files. For information about filename and directory structures of digital cameras, see Design rule for Camera File system.

Exif is supported by almost all camera manufacturers.

The Exif tag structure is borrowed from TIFF files. On several image specific properties, there is a large overlap between the tags defined in the TIFF, Exif, TIFF/EP, and DCF standards. For descriptive metadata, there is an overlap between Exif, IPTC Information Interchange Model and XMP info, which also can be embedded in a JPEG file. The Metadata Working Group has guidelines on mapping tags between these standards. [6]

The Exif format has standard tags for location information. As of 2014 [update], many cameras and mobile phones have a built-in GPS receiver that stores the location information in the Exif header when a picture is taken. Some other cameras have a separate GPS receiver that fits into the flash connector or hot shoe. Recorded GPS data can also be added to any digital photograph on a computer, either by correlating the time stamps of the photographs with a GPS record from a hand-held GPS receiver or manually by using a map or mapping software. Some cameras can be paired with cellphones to provide the geolocation. The process of adding geographic information to a photograph is known as geotagging. Photo-sharing communities like Panoramio, locr or Flickr equally allow their users to upload geocoded pictures or to add geolocation information online.

Software libraries, such as libexif [7] for C and Adobe XMP Toolkit [8] or Exiv2 [9] for C++, Metadata Extractor [10] for Java, PIL/Pillow for Python, LEADTOOLS or ExifTool [11] for Perl, parse Exif data from files and read/write Exif tag values.

In December 2012, anti-virus businessman John McAfee was arrested in Guatemala while fleeing from alleged persecution [20] in neighboring Belize. Vice magazine had published an exclusive interview on their website with McAfee "on the run" [21] that included a photo of McAfee with a Vice reporter taken with a phone that had geotagged the image. [22] The photo's metadata included GPS coordinates locating McAfee in Guatemala, and he was captured two days later. [23] McAfee later claimed to have edited the Exif data from his phone to provide a false location. [24]

According to documents leaked by Edward Snowden, the NSA is targeting Exif information under the XKeyscore program. [25]

The privacy problem of Exif data can be avoided by removing the Exif data using a metadata removal tool. [26]

Metadata Working Group was formed by a consortium of companies in 2006 (according to their web page) or 2007 (as stated in their own press release). Version 2.0 of the specification was released in November 2010, [6] giving recommendations concerning the use of Exif, IPTC and XMP metadata in images.

Not all devices use every available metadata field in the Exif standard. 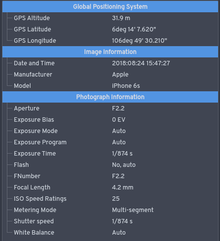 The following table shows Exif metadata for a photo made with a typical digital camera. Notice that authorship and copyright information is generally not provided in the camera's output, so it must be filled in during later stages of processing. Some programs, such as Canon's Digital Photo Professional, allow the name of the owner to be added to the camera itself.

In addition to the basic date and time tags (DateTime, DateTimeOriginal, and DateTimeDigitized), there are three corresponding "subsecond" tags: SubsecTime, SubsecTimeOriginal, and SubsecTimeDigitized. The SubsecTime tag is defined in version 2.3 as "a tag used to record fractions of seconds for the DateTime tag;" [4] the SubsecTimeOriginal and SubsecTimeDigitized fields are defined similarly. The subsecond tags are of variable length, meaning manufacturers may choose the number of ASCII-encoded decimal digits to place in these tags. For DateTime = 2000:01:01 00:00:00, the actual time with various subsecond values would be:

The standard does not specify which particular event during the "taking" of a picture the time tags should describe. The standard is, in fact, ambiguous. The DateTimeOriginal tag is defined as "The date and time when the original image data was generated." For an exposure—say, 30 seconds—longer than the granularity of the timestamp (one second for the DateTimeOriginal tag), the tag's time could correspond to the beginning of the exposure, the end of the exposure, or some other time. This confusion is exacerbated for the subsecond tags, where the granularity (down to 1/10000th of a second in the examples in the standard) is shorter than many common exposure durations.

As noted above, tags to specify the previously-missing timezone information were added in Exif version 2.31. These are "OffsetTime", "OffsetTimeOriginal" and "OffsetTimeDigitized". They are formatted as seven ASCII characters (including the null terminator) denoting the hours and minutes of the offset, like +01:00 or -01:00. The offset is "from UTC (the time difference from Universal Coordinated Time including daylight saving time) of the time of" [4] the matching tag.

The Exif specification also includes a description of FPXR (FlashPix-ready) information, which may be stored in APP2 of JPEG images using a structure similar to that of a FlashPix file. [28] These FlashPix extensions allow meta-information to be preserved when converting between FPXR JPEG images and FlashPix images. FPXR information may be found in images from some models of digital cameras by Kodak and Hewlett-Packard. [29] Below is an example of the FPXR information found in a JPEG image from a Kodak EasyShare V570 digital camera:

The Exif specification describes the RIFF file format used for WAV audio files and defines a number of tags for storing meta-information such as artist, copyright, creation date, and more in these files. [30] The following table gives an example of Exif information found in a WAV file written by the Pentax Optio WP digital camera:

Microsoft has implemented the last solution in Windows 10: In the Windows explorer you can change the Exif data of an image file by the properties window. Here the tab sheet "Details" contains some Exif data like title, subject, comments etc. and these Exif data can also be changed and stored. When the image file is saved the tag "OffsetSchema" (tag ID = 0xea1d) is added and this tag contains a signed 32 bit number. With this number the original index of "MakerNote" can be restored:

But the tag "OffsetSchema" was defined by Microsoft and it is not part of the official Exif standard.

In some cases, camera vendors also store important information only in proprietary makernote fields, instead of using available Exif standard tags. An example for this is Nikon's ISO speed settings tag. [36]