From Wikipedia, the free encyclopedia
(Redirected from Euler tour)
Trail in a graph that visits each edge once 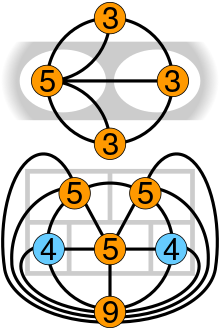 Multigraphs of both Königsberg Bridges and Five room puzzles have more than two odd vertices (in orange), thus are not Eulerian and hence the puzzles have no solutions. 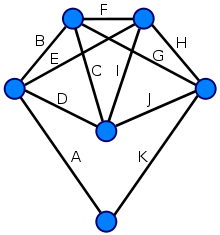 Every vertex of this graph has an even degree. Therefore, this is an Eulerian graph. Following the edges in alphabetical order gives an Eulerian circuit/cycle.

In graph theory, an Eulerian trail (or Eulerian path) is a trail in a finite graph that visits every edge exactly once (allowing for revisiting vertices). Similarly, an Eulerian circuit or Eulerian cycle is an Eulerian trail that starts and ends on the same vertex. They were first discussed by Leonhard Euler while solving the famous Seven Bridges of Königsberg problem in 1736. The problem can be stated mathematically like this:

Given the graph in the image, is it possible to construct a path (or a cycle; i.e., a path starting and ending on the same vertex) that visits each edge exactly once?

Euler proved that a necessary condition for the existence of Eulerian circuits is that all vertices in the graph have an even degree, and stated without proof that connected graphs with all vertices of even degree have an Eulerian circuit. The first complete proof of this latter claim was published posthumously in 1873 by Carl Hierholzer. [1] This is known as Euler's Theorem:

A connected graph has an Euler cycle if and only if every vertex has even degree.

The term Eulerian graph has two common meanings in graph theory. One meaning is a graph with an Eulerian circuit, and the other is a graph with every vertex of even degree. These definitions coincide for connected graphs. [2]

An Eulerian trail, [3] or Euler walk, in an undirected graph is a walk that uses each edge exactly once. If such a walk exists, the graph is called traversable or semi-eulerian. [4]

An Eulerian cycle, [3] also called an Eulerian circuit or Euler tour, in an undirected graph is a cycle that uses each edge exactly once. If such a cycle exists, the graph is called Eulerian or unicursal. [5] The term "Eulerian graph" is also sometimes used in a weaker sense to denote a graph where every vertex has even degree. For finite connected graphs the two definitions are equivalent, while a possibly unconnected graph is Eulerian in the weaker sense if and only if each connected component has an Eulerian cycle.

The definition and properties of Eulerian trails, cycles and graphs are valid for multigraphs as well. 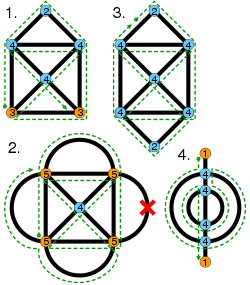 Fleury's algorithm is an elegant but inefficient algorithm that dates to 1883. [7] Consider a graph known to have all edges in the same component and at most two vertices of odd degree. The algorithm starts at a vertex of odd degree, or, if the graph has none, it starts with an arbitrarily chosen vertex. At each step it chooses the next edge in the path to be one whose deletion would not disconnect the graph, unless there is no such edge, in which case it picks the remaining edge left at the current vertex. It then moves to the other endpoint of that edge and deletes the edge. At the end of the algorithm there are no edges left, and the sequence from which the edges were chosen forms an Eulerian cycle if the graph has no vertices of odd degree, or an Eulerian trail if there are exactly two vertices of odd degree.

While the graph traversal in Fleury's algorithm is linear in the number of edges, i.e.

, we also need to factor in the complexity of detecting bridges. If we are to re-run Tarjan's linear time bridge-finding algorithm [8] after the removal of every edge, Fleury's algorithm will have a time complexity of

. A dynamic bridge-finding algorithm of Thorup (2000) allows this to be improved to

, but this is still significantly slower than alternative algorithms.

This algorithm may also be implemented with a deque. Because it is only possible to get stuck when the deque represents a closed tour, one should rotate the deque by removing edges from the tail and adding them to the head until unstuck, and then continue until all edges are accounted for. This also takes linear time, as the number of rotations performed is never larger than

(intuitively, any "bad" edges are moved to the head, while fresh edges are added to the tail)

Orthographic projections and Schlegel diagrams with Hamiltonian cycles of the vertices of the five platonic solids – only the octahedron has an Eulerian path or cycle, by extending its path with the dotted one

BEST theorem is first stated in this form in a "note added in proof" to the Aardenne-Ehrenfest and de Bruijn paper (1951). The original proof was bijective and generalized the de Bruijn sequences. It is a variation on an earlier result by Smith and Tutte (1941).

Counting the number of Eulerian circuits on undirected graphs is much more difficult. This problem is known to be #P-complete. [10] In a positive direction, a Markov chain Monte Carlo approach, via the Kotzig transformations (introduced by Anton Kotzig in 1968) is believed to give a sharp approximation for the number of Eulerian circuits in a graph, though as yet there is no proof of this fact (even for graphs of bounded degree).

The asymptotic formula for the number of Eulerian circuits in the complete graphs was determined by McKay and Robinson (1995): [11]

A similar formula was later obtained by M.I. Isaev (2009) for complete bipartite graphs: [12]

Eulerian trails are used in bioinformatics to reconstruct the DNA sequence from its fragments. [13] They are also used in CMOS circuit design to find an optimal logic gate ordering. [14] There are some algorithms for processing trees that rely on an Euler tour of the tree (where each edge is treated as a pair of arcs). [15] [16] The de Bruijn sequences can be constructed as Eulerian trails of de Bruijn graphs. [17] 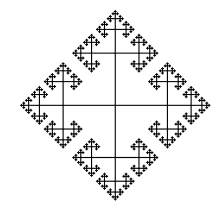 The following result was proved by Veblen in 1912: An undirected connected graph is Eulerian if and only if it is the disjoint union of some cycles. [20]

Hierholzer developed a linear time algorithm for constructing an Eulerian tour in an undirected graph. 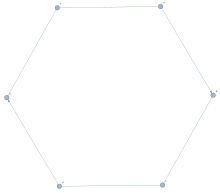 This mixed graph is Eulerian. The graph is even but not symmetric which proves that evenness and symmetricness are not necessary and sufficient conditions for a mixed graph to be Eulerian.

Ford and Fulkerson proved in 1962 in their book Flows in Networks a necessary and sufficient condition for a graph to be Eulerian, viz., that every vertex must be even and satisfy the balance condition. For every subset of vertices S, the difference between the number of arcs leaving S and entering S must be less than or equal to the number of edges incident with S. This is the balanced set condition. A mixed and strongly connected graph is Eulerian if and only if G is even and balanced. [21] 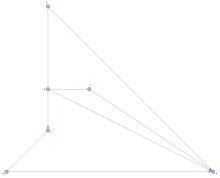 An even mixed graph that violates the balanced set condition and is therefore not Eulerian.

An even mixed graph that satisfies the balanced set condition and is therefore an Eulerian mixed graph.