From Wikipedia
(Redirected from Ethnic groups of Madagascar)
https://en.wikipedia.org/wiki/Ethnic_groups_of_Madagascar 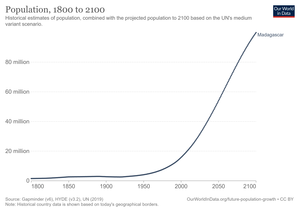 Demographics of Madagascar, Data of Our World in Data, year 2022; number of inhabitants in millions.

Population density of Madagascar as of 2004

The problem with population estimation in Madagascar is that data is very old and limited. The last population census was carried out in 1993, after an initial 1975 census. There was an attempt at a census in 2009, but this attempt ultimately failed due to political instability. Therefore, the demographic situation is inferred but reliability of any estimates from any source has a large margin of error. According to the 2022 revision of the World Population Prospects [1] [2] the total population was 28,915,653 in 2021, compared to only 4,084,000 in 1950. The proportion of children below the age of 15 in 2010 was 43.1%, 53.8% was between 15 and 65 years of age, while 3.1% was 65 years or older . [3]

Registration of vital events in Madagascar is not complete. The Population Department of the United Nations prepared the following estimates. 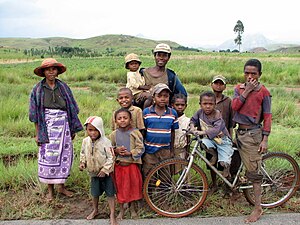 Many rural regions of Magagascar have high birthrates 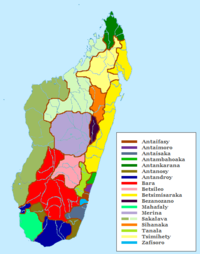 The island of Madagascar is predominantly populated by people broadly classified as belonging to the Malagasy ethno-linguistic group. This group is further subdivided a number of ethnic groups, often into the standard eighteen. In addition, communities of Indians in Madagascar and Arabs and Somalis have long been established on the island and have assimilated into local communities to varying degrees, in some places having long since become identified "Malagasy" ethnic groups, and in others maintaining distinct identities and cultural separation. More recent arrivals include Europeans and Chinese immigrants.

Madagascar was probably uninhabited prior to Austronesian settlement in the early centuries AD. Austronesian features are most predominant in the central highlands peoples and coastal peoples are phenotypically East African with various Malay, Arab, Somali, European and Indian admixtures. The largest coastal groups are the Betsimisaraka (1,500,000) and the Tsimihety and Sakalava (700,000 each). Malagasy society has long been polarized between the politically and economically advantaged highlanders of the central plateaux and the people along the coast. For example, in the 1970s there was widespread opposition among coastal ethnics against the policy of "Malagasization" which intended to phase out the use of the French language in public life in favour of a more prominent position for the Malagasy language, whose orthography is based on the Merina dialect. Identity politics were also at the core of the brief civil unrest during 2002.

Indians in Madagascar descend mostly from traders who arrived in the newly independent nation looking for better opportunities. The majority of them came from the west coast of India known as Karana (Muslim) and Banian (Hindu). The majority speak Hindi or Gujarati, although some other Indian dialects are also spoken. Nowadays [update] the younger generations speak at least three languages, including French, Gujarati and Malagasy. A large number of the Indians in Madagascar have a high level of education, particularly the younger generation.[ citation needed]

A sizeable number of Europeans also reside in Madagascar, mostly of French descent. 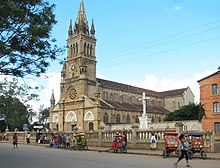 Religion in Madagascar (2020) according to the Pew Research Center [10]

According to the 1993 national census, 41% of Madagascans practise Christianity and 52% practise traditional religion, [11] which tends to emphasize links between the living and the razana (ancestors). But according to the Pew Research Center in 2020, only 4.5% of Madagascans practise folk religions and 85% are Christian. According to the Association of Religion Data Archives, 58.1% of the population is Christian, 2.1% is Muslim, 39.2% practices traditional faiths, while 0.6% of the population is non-religious or adheres to other faiths as of 2020. [12]

Madagascar's traditional religions tend to emphasize links between the living and the dead. They believe that the dead join their ancestors in the ranks of divinity and that ancestors are intensely concerned with the fate of their living descendants. This spiritual communion is celebrated by the Merina and Betsileo reburial practice of famadihana, or "turning over the dead". In this ritual, relatives' remains are removed from the family tomb, rewrapped in new silk shrouds, and returned to the tomb following festive ceremonies in their honor. In the festivities, they eat, drink, and literally dance with the dead. After one or two days of celebrating, they shower the body with gifts and rebury it.

Malagasy Christians are mostly Protestant (mainly Reformed Protestant Church of Jesus Christ in Madagascar (FJKM), Lutheran, and Anglican) or Roman Catholic, but there are also smaller groups such as members of the Church of Jesus Christ of Latter-day Saints (Mormons), Jehovah's Witnesses, Seventh-day Adventists, [13] and Eastern Orthodox Christians. Many incorporate the cult of the dead with their other religious beliefs and bless their dead at church before proceeding with the traditional burial rites. They also may invite a pastor to attend a famadihana. A historical rivalry exists between the predominantly Catholic masses, considered to be underprivileged, and the predominantly Protestant Merina aristocrats, who tend to prevail in the civil service, business, and professions.

The Church of Jesus Christ of Latter-day Saints has more than 13,000 members in 42 congregations in Madagascar. [15]

A small community started practicing Judaism in 2012, and formally converted in 2016 with the assistance of Kulanu, a nonprofit organization focusing on remote Jewish communities. [16] [17]

Demographic statistics according to the World Population Review in 2022. [18]

The following demographic are from the CIA World Factbook [19] unless otherwise indicated.

Population pyramid of Madagascar in 2020

The largest city in Madagascar is Antananarivo. The next largest cities are Toamasina, Antsirabe, Fianarantsoa, Mahajanga, Toliara, Antsiranana and Ambovombe.

note: on 21 March 2022, the US Centers for Disease Control and Prevention (CDC) issued a Travel Alert for polio in Africa; Madagascar is currently considered a high risk to travelers for circulating vaccine-derived polioviruses (cVDPV); vaccine-derived poliovirus (VDPV) is a strain of the weakened poliovirus that was initially included in oral polio vaccine (OPV) and that has changed over time and behaves more like the wild or naturally occurring virus; this means it can be spread more easily to people who are unvaccinated against polio and who come in contact with the stool or respiratory secretions, such as from a sneeze, of an “infected” person who received oral polio vaccine; the CDC recommends that before any international travel, anyone unvaccinated, incompletely vaccinated, or with an unknown polio vaccination status should complete the routine polio vaccine series; before travel to any high-risk destination, CDC recommends that adults who previously completed the full, routine polio vaccine series receive a single, lifetime booster dose of polio vaccine

Wikimedia Commons has media related to Demographics of Madagascar.