Mustangs on the range, showing a wide range of coat colors

Horses exhibit a diverse array of coat colors and distinctive markings. A specialized vocabulary has evolved to describe them.

While most horses remain the same color throughout life, a few, over the course of several years, will develop a different coat color from that with which they were born. Most white markings are present at birth, and the underlying skin color of a healthy horse does not change. Some Equine coat colors are also related to the breed of horse, like the Friesian breed for instance.

The basic outline of equine coat color genetics has largely been resolved, and DNA tests to determine the likelihood that a horse will have offspring of a given color have been developed for some colors. Discussion, research, and even controversy continues about some of the details, particularly those surrounding spotting patterns, color sub-shades such as " sooty" or " flaxen", and markings.

The two basic pigment colors of horse hairs are red (a reddish brown color) and black.

Genetically, a chestnut horse is a horse without the ability to produce black pigment, while a black horse does not have dominant agouti to restrict their black pigment to points. The MC1R (extension) either binds alpha-MSH and signals for black and red pigment to be produced ('E' at extension), or it only signals for red ('e' at extension). ASIP (agouti) either blocks MC1R from binding to alpha-MSH and signalling for black ('A' at agouti), or it does not ('a' at agouti). The extension gene determines whether the cells can decide to produce black and red, and can be either E (able to produce black and red) or e (only able to produce red, as in chestnut). To be chestnut a horse must have two copies of e, so the genotype is e/e. A horse with a genotype of E/E or E/e can still make black and red pigments and will be bay or black. Meanwhile, the agouti gene determines whether the cells can stop producing black. The A version of agouti means that it can, so as long as has E at extension the base color will be bay. The a version of agouti means the cells cannot stop producing black, so a horse with two copies of a (genotype a/a) and E at extension will be black rather than bay. [1] [2]

So together these two genes control the two pigments to make the three base colors. The vast range of all other coat colors are created by additional genes' action upon one of these base colors.

A gray horse can be born any color, but as it gets older some hairs turn white. Most will eventually gray out to either a complete white or to a "fleabitten" coat, which retains speckles of the horse's original colour. Most "white" horses are actually grays with a fully white hair coat. A gray horse is distinguished from a max white horse by dark skin, particularly noticeable around the eyes, muzzle, flanks, and other areas of thin or no hair. Gray horses are prone to equine melanoma. [3]

Variations of gray that a horse may exhibit over its lifetime include: 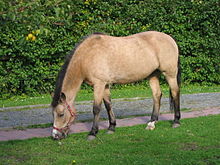 These colors are lighter versions of the base colors, caused by dilution genes. 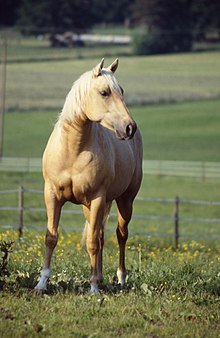 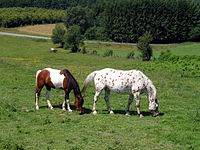 This photograph shows the difference between a pinto horse (left) and a leopard (right).

These patterns all have white hairs and often pink skin, varying from a fully white horse through the pinto patterns and smaller white markings to roan which only adds a few white hairs spread throughout the coat. These patterns can occur on top of any other color. The base color determines the color of the colored hairs, while the white patterns determine where and how many white hairs are present. Biologically the white comes from a lack of pigment cells.

There are a group of coat patterns caused by the leopard gene complex. Not every horse with leopard genetics will exhibit hair coat spotting. However, even solid individuals will exhibit secondary characteristics such as vertically striped hooves and mottled skin around the eyes, lips, and genitalia, plus a white sclera of the eye. [5] Several breeds of horse can boast leopard-spotted (a term used collectively for all patterns) individuals including the Knabstrupper, Noriker, and the Appaloosa. There are several distinct leopard patterns:

A pinto is multi-colored with large patches of white and another color such as brown or black. Often confused with Paint, which is a narrower term referring to a specific breed of mostly pinto horses with known Quarter Horse and/or Thoroughbred bloodlines.

Pinto can look like any of the other colors, but with white added. Variations of pinto based on the color include:

Variations based on the shape of the white include:

Roaning adds white hairs to any of the other colors.

One of the rarest colors, a white horse has white hair and fully or largely unpigmented (pink) skin. These horses are born white, with blue or brown eyes, and remain white for life. The vast majority of so-called "white" horses are actually grays with a fully white hair coat. A truly white horse that lives to adulthood occurs one of two ways: either by inheriting one copy of a dominant white ("W") gene, of which several have been identified, or is a particular type of sabino that is homozygous for the "SB-1" gene. However, a foal with the genetic disease known as lethal white syndrome dies shortly after birth. [7] There are no " albinos" in the horse world. Albino, defined as animals with a white coat with pink skin and reddish eyes, is created by genetic mechanisms that do not exist in horses. [8] In some cases, homozygous dominant white is thought to be an embryonic lethal, though this has not been established for all white horses.

A white marking, such as the large snip on this horse's muzzle, usually has pink skin underneath it, except on the edges.

White markings are present at birth and unique to each horse, making them useful in identifying individual animals. Markings usually have pink skin underneath them, though some faint markings may not, and white hairs may extend past the area of underlying pink skin. Though markings that overlie dark skin may appear to change, the underlying skin color and hair growing from pink skin will not.

Other colors and modifiers

Horses may also be uniquely identified by an unusual eye color, whorls, brands and chestnuts.

Registries have opened that accept horses (and sometimes ponies and mules) of almost any breed or type, with color either the only requirement for registration or the primary criterion. These are called " color breeds". Unlike "true" horse breeds, there are few if any unique physical characteristics required, nor is the stud book limited to only certain breeds or offspring of previously registered horses. As a general rule, the color also does not always breed on (in some cases, due to genetic improbability), and offspring without the stated color are usually not eligible for recording with the color breed registry. The best-known color breed registries are for buckskins, palominos, and pintos.

Some "true" breeds also have color that usually breeds on as well as distinctive physical characteristics and a limited stud book. These horses are true breeds that are said to have a "color preference". They are not color breeds, and include the Friesian horse (must be uniformly black for mainstream registration), the Appaloosa (Leopard or other Leopard complex patterns) and the American Paint Horse. In some breeds, though not all, offspring of animals registered in these stud books can also be registered, sometimes with restrictions, even if they do not have the desired color.