From Wikipedia
https://en.wikipedia.org/wiki/Epistolary_novel
Novel written as a series of letters 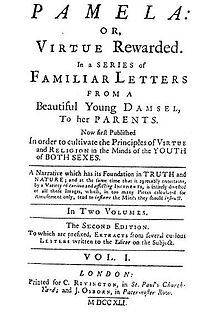 An epistolary novel is a novel written as a series of letters. [1] The term is often extended to cover novels that intersperse documents of other kinds with the letters, most commonly diary entries and newspaper clippings, and sometimes considered to include novels composed of documents even if they don't include letters at all. [2] [3] More recently, epistolaries may include electronic documents such as recordings and radio, blog posts, and e-mails. The word epistolary is derived from Latin from the Greek word ἐπιστολή epistolē, meaning a letter (see epistle). In German, this type of novel is known as a Briefroman.

The epistolary form can add greater realism to a story, because it mimics the workings of real life. It is thus able to demonstrate differing points of view without recourse to the device of an omniscient narrator. An important strategic device in the epistolary novel for creating the impression of authenticity of the letters is the fictional editor. [4] 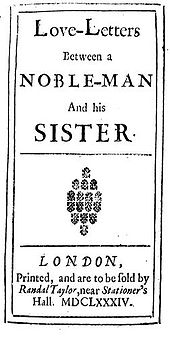 Title page of Aphra Behn's early epistolary novel, Love-Letters Between a Nobleman and His Sister (1684)

There are two theories on the genesis of the epistolary novel. The first claims that the genre is originated from novels with inserted letters, in which the portion containing the third-person narrative in between the letters was gradually reduced. [5] The other theory claims that the epistolary novel arose from miscellanies of letters and poetry: some of the letters were tied together into a (mostly amorous) plot. [6] Both claims have some validity. The first truly epistolary novel, the Spanish "Prison of Love" (Cárcel de amor) (c. 1485) by Diego de San Pedro, belongs to a tradition of novels in which a large number of inserted letters already dominated the narrative. Other well-known examples of early epistolary novels are closely related to the tradition of letter-books and miscellanies of letters. Within the successive editions of Edmé Boursault's Letters of Respect, Gratitude and Love (Lettres de respect, d'obligation et d'amour) (1669), a group of letters written to a girl named Babet were expanded and became more and more distinct from the other letters, until it formed a small epistolary novel entitled Letters to Babet (Lettres à Babet). The immensely famous Letters of a Portuguese Nun (Lettres portugaises) (1669) generally attributed to Gabriel-Joseph de La Vergne, comte de Guilleragues, though a small minority still regard Marianna Alcoforado as the author, is claimed to be intended to be part of a miscellany of Guilleragues prose and poetry. [7] The founder of the epistolary novel in English is said by many to be James Howell (1594–1666) with "Familiar Letters" (1645–50), who writes of prison, foreign adventure, and the love of women.

Perhaps first work to fully utilize the potential of an epistolary novel was Love-Letters Between a Nobleman and His Sister. This work was published anonymously in three volumes (1684, 1685, and 1687), and has been attributed to Aphra Behn though its authorship remains disputed in the 21st Century. [8] The novel shows the genre's results of changing perspectives: individual points were presented by the individual characters, and the central voice of the author and moral evaluation disappeared (at least in the first volume; further volumes introduced a narrator). The author furthermore explored a realm of intrigue with complex scenarios such as letters that fall into the wrong hands, faked letters, or letters withheld by protagonists.

The epistolary novel as a genre became popular in the 18th century in the works of such authors as Samuel Richardson, with his immensely successful novels Pamela (1740) and Clarissa (1749). John Cleland's early erotic novel Fanny Hill (1748) is written as a series of letters from the titular character to an unnamed recipient. In France, there was Lettres persanes (1721) by Montesquieu, followed by Julie, ou la nouvelle Héloïse (1761) by Jean-Jacques Rousseau, and Choderlos de Laclos' Les Liaisons dangereuses (1782), which used the epistolary form to great dramatic effect, because the sequence of events was not always related directly or explicitly. In Germany, there was Johann Wolfgang von Goethe's The Sorrows of Young Werther (Die Leiden des jungen Werther) (1774) and Friedrich Hölderlin's Hyperion. The first Canadian novel, The History of Emily Montague (1769) by Frances Brooke, [9] and twenty years later the first American novel, The Power of Sympathy (1789) by William Hill Brown, [10] were both written in epistolary form.

Starting in the 18th century, the epistolary form was subject to much ridicule, resulting in a number of savage burlesques. The most notable example of these was Henry Fielding's Shamela (1741), written as a parody of Pamela. In it, the female narrator can be found wielding a pen and scribbling her diary entries under the most dramatic and unlikely of circumstances. Oliver Goldsmith used the form to satirical effect in The Citizen of the World, subtitled "Letters from a Chinese Philosopher Residing in London to his Friends in the East" (1760–61). So did the diarist Fanny Burney in a successful comic first novel, Evelina (1788).

The epistolary novel slowly became less popular after 18th century. Although Jane Austen tried the epistolary in juvenile writings and her novella Lady Susan (1794), she abandoned this structure for her later work. It is thought that her lost novel First Impressions, which was redrafted to become Pride and Prejudice, may have been epistolary: Pride and Prejudice contains an unusual number of letters quoted in full and some play a critical role in the plot.

The epistolary form nonetheless saw continued use, surviving in exceptions or in fragments in nineteenth-century novels. In Honoré de Balzac's novel Letters of Two Brides, two women who became friends during their education at a convent correspond over a 17-year period, exchanging letters describing their lives. Mary Shelley employs the epistolary form in her novel Frankenstein (1818). Shelley uses the letters as one of a variety of framing devices, as the story is presented through the letters of a sea captain and scientific explorer attempting to reach the north pole who encounters Victor Frankenstein and records the dying man's narrative and confessions. Published in 1848, Anne Brontë's novel The Tenant of Wildfell Hall is framed as a retrospective letter from one of the main heroes to his friend and brother-in-law with the diary of the eponymous tenant inside it. In the late 19th century, Bram Stoker released one of the most widely recognized and successful novels in the epistolary form to date, Dracula. Printed in 1897, the novel is compiled entirely of letters, diary entries, newspaper clippings, telegrams, doctor's notes, ship's logs, and the like.

Epistolary novels can be categorized based on the number of people whose letters are included. This gives three types of epistolary novels: monophonic (giving the letters of only one character, like Letters of a Portuguese Nun and The Sorrows of Young Werther), dialogic (giving the letters of two characters, like Mme Marie Jeanne Riccoboni's Letters of Fanni Butler (1757), and polyphonic (with three or more letter-writing characters, such as in Bram Stoker's Dracula). A crucial element in polyphonic epistolary novels like Clarissa and Dangerous Liaisons is the dramatic device of 'discrepant awareness': the simultaneous but separate correspondences of the heroines and the villains creating dramatic tension. They can also be classified according to their type and quantity of use of non-letter documents, though this has obvious correlations with the number of voices - for example, newspaper clippings are unlikely to feature heavily in a monophonic epistolary and considerably more likely in a polyphonic one.[ citation needed]

The epistolary novel form has continued to be used after the eighteenth century.