From Wikipedia
(Redirected from Elegies)
https://en.wikipedia.org/wiki/Elegies
Poem of serious reflection, usually a lament for the dead
For other uses, see Elegy (disambiguation).
Not to be confused with Eulogy.

An elegy is a poem of serious reflection, and in English literature usually a lament for the dead. However, according to The Oxford Handbook of the Elegy, "for all of its pervasiveness ... the 'elegy' remains remarkably ill defined: sometimes used as a catch-all to denominate texts of a somber or pessimistic tone, sometimes as a marker for textual monumentalizing, and sometimes strictly as a sign of a lament for the dead". [1] [2] 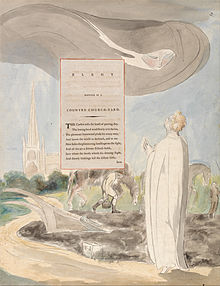 Elegy Written in a Country Church-Yard, illustration by William Blake.

Other than epitaphs, examples of ancient elegy as a poem of mourning include Catullus' Carmen 101, on his dead brother, and elegies by Propertius on his dead mistress Cynthia and a matriarch of the prominent Cornelian family. Ovid wrote elegies bemoaning his exile, which he likened to a death. [7]

In English literature, the more modern and restricted meaning, of a lament for a departed beloved or tragic event, has been current only since the sixteenth century; the broader concept was still employed by John Donne for his elegies written in the early seventeenth century. That looser concept is especially evident in the Old English Exeter Book (circa 1000 CE), which contains "serious meditative" and well-known poems such as " The Wanderer", " The Seafarer", and " The Wife's Lament". [8] In those elegies, the narrators use the lyrical "I" to describe their own personal and mournful experiences. They tell the story of the individual rather than the collective lore of his or her people as epic poetry seeks to tell. [9] By the time of Samuel Taylor Coleridge and others, the term had come to mean "serious meditative poem": [5]

Elegy is a form of poetry natural to the reflective mind. It may treat of any subject, but it must treat of no subject for itself; but always and exclusively with reference to the poet. As he will feel regret for the past or desire for the future, so sorrow and love became the principal themes of the elegy. Elegy presents every thing as lost and gone or absent and future. [10]

A famous example of elegy is Thomas Gray's Elegy Written in a Country Churchyard (1750).

In Germany, the most famous example is Duino Elegies by Rainer Maria Rilke (1922).

In Spain, one of the capital works in Spanish is Coplas a la muerte del maestre don Rodrigo (Stanzas About the Death of His Father), written between 1460 and 1470 by Jorge Manrique. [12]

"Elegy" (French: élégie) may denote a type of musical work, usually of a sad or somber nature. A well-known example is the Élégie, Op. 10, by Jules Massenet. This was originally written for piano, as a student work; then he set it as a song; and finally it appeared as the "Invocation", for cello and orchestra, a section of his incidental music to Leconte de Lisle's Les Érinnyes. Other examples include the Elegy Op. 58 of Edward Elgar and the Elegy for Strings of Benjamin Britten. Though not specifically designated an elegy, Samuel Barber's Adagio for Strings has an elegiac character. [13] [14]