Ancient Egyptian mathematics is the mathematics that was developed and used in Ancient Egypt c. 3000 to c. 300  BCE, from the Old Kingdom of Egypt until roughly the beginning of Hellenistic Egypt. The ancient Egyptians utilized a numeral system for counting and solving written mathematical problems, often involving multiplication and fractions. Evidence for Egyptian mathematics is limited to a scarce amount of surviving sources written on papyrus. From these texts it is known that ancient Egyptians understood concepts of geometry, such as determining the surface area and volume of three-dimensional shapes useful for architectural engineering, and algebra, such as the false position method and quadratic equations.

Written evidence of the use of mathematics dates back to at least 3200 BC with the ivory labels found in Tomb U-j at Abydos. These labels appear to have been used as tags for grave goods and some are inscribed with numbers. [1] Further evidence of the use of the base 10 number system can be found on the Narmer Macehead which depicts offerings of 400,000 oxen, 1,422,000 goats and 120,000 prisoners. [2] Archaeological evidence has suggested that the Ancient Egyptian counting system had origins in Sub-Saharan Africa. [3] Also, fractal geometry designs which are widespread among Sub-Saharan African cultures are also found in Egyptian architecture and cosmological signs. [4]

The evidence of the use of mathematics in the Old Kingdom (c. 2690–2180 BC) is scarce, but can be deduced from inscriptions on a wall near a mastaba in Meidum which gives guidelines for the slope of the mastaba. [5] The lines in the diagram are spaced at a distance of one cubit and show the use of that unit of measurement. [1]

During the New Kingdom (c. 1550–1070 BC) mathematical problems are mentioned in the literary Papyrus Anastasi I, and the Papyrus Wilbour from the time of Ramesses III records land measurements. In the workers village of Deir el-Medina several ostraca have been found that record volumes of dirt removed while quarrying the tombs. [1] [6]

Current understanding of ancient Egyptian mathematics is impeded by the paucity of available sources. The sources that do exist include the following texts (which are generally dated to the Middle Kingdom and Second Intermediate Period):

From the New Kingdom there are a handful of mathematical texts and inscriptions related to computations: 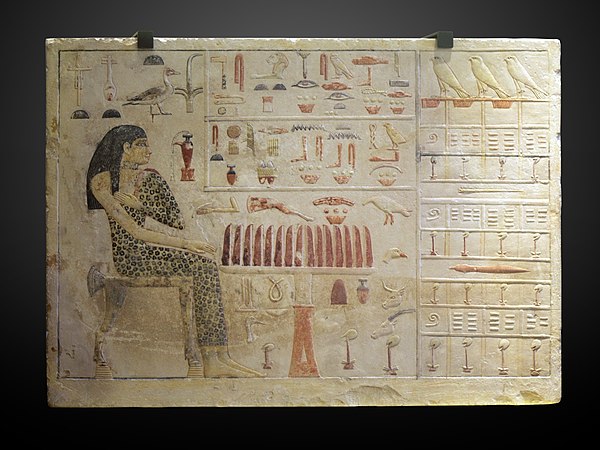 Slab stela of Old Kingdom princess Neferetiabet (dated 2590–2565 BC) from her tomb at Giza, painting on limestone, now in the Louvre

Egyptian numerals date back to the Predynastic period. Ivory labels from Abydos record the use of this number system. It is also common to see the numerals in offering scenes to indicate the number of items offered. The king's daughter Neferetiabet is shown with an offering of 1000 oxen, bread, beer, etc.

The Egyptian number system was additive. Large numbers were represented by collections of the glyphs and the value was obtained by simply adding the individual numbers together.

Egyptian multiplication was done by a repeated doubling of the number to be multiplied (the multiplicand), and choosing which of the doublings to add together (essentially a form of binary arithmetic), a method that links to the Old Kingdom. The multiplicand was written next to figure 1; the multiplicand was then added to itself, and the result written next to the number 2. The process was continued until the doublings gave a number greater than half of the multiplier. Then the doubled numbers (1, 2, etc.) would be repeatedly subtracted from the multiplier to select which of the results of the existing calculations should be added together to create the answer. [2]

For example, Problem 69 on the Rhind Papyrus (RMP) provides the following illustration, as if Hieroglyphic symbols were used (rather than the RMP's actual hieratic script). [8]

denotes the intermediate results that are added together to produce the final answer.

Aha problems involve finding unknown quantities (referred to as Aha) if the sum of the quantity and part(s) of it are given. The Rhind Mathematical Papyrus also contains four of these type of problems. Problems 1, 19, and 25 of the Moscow Papyrus are Aha problems. For instance problem 19 asks one to calculate a quantity taken 1+1/2 times and added to 4 to make 10. [8] In other words, in modern mathematical notation we are asked to solve the linear equation:

The mathematical writings show that the scribes used (least) common multiples to turn problems with fractions into problems using integers. In this connection red auxiliary numbers are written next to the fractions. [8]

The use of the Horus eye fractions shows some (rudimentary) knowledge of geometrical progression. Knowledge of arithmetic progressions is also evident from the mathematical sources. [8]

The ancient Egyptians were the first civilization to develop and solve second-degree ( quadratic) equations. This information is found in the Berlin Papyrus fragment. Additionally, the Egyptians solve first-degree algebraic equations found in Rhind Mathematical Papyrus. [9]

Image of Problem 14 from the Moscow Mathematical Papyrus. The problem includes a diagram indicating the dimensions of the truncated pyramid.

Problem 56 of the RMP indicates an understanding of the idea of geometric similarity. This problem discusses the ratio run/rise, also known as the seqed. Such a formula would be needed for building pyramids. In the next problem (Problem 57), the height of a pyramid is calculated from the base length and the seked (Egyptian for the reciprocal of the slope), while problem 58 gives the length of the base and the height and uses these measurements to compute the seqed. In Problem 59 part 1 computes the seqed, while the second part may be a computation to check the answer: If you construct a pyramid with base side 12 [cubits] and with a seqed of 5 palms 1 finger; what is its altitude? [8]