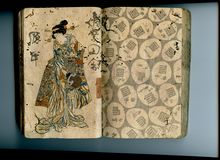 Cover & back of 2 bound-together volumes from the gōkan e-hon series – Nise Murasaki inaka Genj/A Country Genji, by an Imitation Murasaki. Published in 38(?) chapters, it was a parody-reworking of Genji Monogatari/The Tale of Genji. The series ran, in original release, from 1829 to 1842. Author: Ryūtei Tanehiko, Illustrator: Utagawa Kunisada

E-hon or Ehon (絵本) is the Japanese term for picture books. It may be applied in the general sense, or may refer specifically to a type of woodblock printed illustrated volume published in the Edo period.

The first ehon were religious items with images by Buddhist painters. [1] Those from the Muromachi period are typically known as nara-ehon. [2] In the early modern period (1600–1868) illustrated books exploded in popularity. They covered a diverse range of subjects with experimentation in production techniques. [1]

Ehon production was a significant part of the Japanese publishing industry (particularly) during the 19th century; most Japanese woodblock print artists of the period produced ehon designs (often in large quantities), as commercial work. [3]

Toward the end of the 19th century, ehon chapter-books were eclipsed in popularity by the new "western" concept of literary magazines. These were larger books which contained more, and a wider range of material per-issue, but usually fewer pictures (measured on a text-to-images ratio). They often used more modern printing methods; the increase in production costs was offset by increased efficiency, larger-scale printing and distribution, and the introduction of advertising. Typically, a magazine would include one large folded, polychrome illustration referencing some "feature" story in the volume, as a frontispiece. Such pictures, woodblock-printed in colour, are known as kuchi-e. The new format also absorbed most of the remaining talent and market for ukiyo-e style prints. 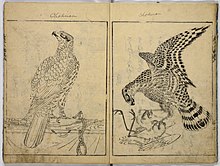 Artist manuals or model books (edehon) [4] were treasured by art schools and became popular with the public. Ōoka Shunboku's Ehon tekagami ("Hand mirror") of 1720 demonstrated characteristic styles of different artists. Illustrations which were either handpainted or stenciled appear in his Minchō shiken of 1746, based on the successful Chinese Manual of the Mustard Seed Garden of 1679 which was released as a Japanese version, Kaishien gaden, in 1748. [5]

In 1765 polychrome woodblock printing was developed in Edo. The prints were called nishiki-e, ie. brocade pictures, because of their similarity to color silk brocades (nishiki). The first large-scale commercial book with full-color printing was Ehon butai ōgi in 1770, with artwork by ukiyo-e artists Katsukawa Shunshō and Ippitsusai Bunchō. The book featured realistic depictions of kabuki actors ( nigao-e) and was popular with theatergoers. [5] The same year saw the publication of Tachibana Minkō's Shokunin burui which was colored with a stenciling technique known as kappazuri. [5] It depicted craftsmen at work at was immediately successful. Also published in 1770 was Ehon seirō bijin awase by Suzuki Harunobu which combined hokku poetry with images of courtesans from the Yoshiwara brothel district. [5]

In 1790 the Tokugawa shogunate introduced severe censorship laws for publishers. They targeted "luxurious" works and for a while publishers ceased production of color woodblock-printed books. [5]

The famous ukiyo-e artist Hokusai worked on dozens of ehon early in his career. In 1814 the first volume of his Hokusai manga was published which featured hundreds of drawings colored with gray and rose pink tones. Its popularity with multiple subsequent volumes appears to have influenced other publishers to use a simplified palette of subdued color. [5] One of the finest ehon works is his 100 Views of Mount Fuji released in 1834–35 in two volumes by Nishimuraya Yohachi with extremely fine carving by the workshop of Egawa Tomekichi and exquisite grey gradations ( bokashi). It is seen as the pinnacle of monochrome printing. [6] [7]

Most ehon of the Edo period were made with side-stitched binding. They used highly durable washi paper. A page is made from a single sheet printed on one side which is folded printed side out. These folded sheets are bound at their open ends with cords of twisted paper which go through two holes made in the stack of sheets. The bookcover is glued to blank outer pages and attached to the stack of pages with a hemp cord stitched through four holes which penetrate the covers and book block. This method of binding is called fukurotoji. [8]