From Wikipedia
https://en.wikipedia.org/wiki/Dyadic_rational
Fraction with denominator a power of two

Dyadic rationals in the interval from 0 to 1

In mathematics, a dyadic rational or binary rational is a number that can be expressed as a fraction whose denominator is a power of two. For example, 1/2, 3/2, and 3/8 are dyadic rationals, but 1/3 is not. These numbers are important in computer science because they are the only ones with finite binary representations. Dyadic rationals also have applications in weights and measures, musical time signatures, and early mathematics education. They can accurately approximate any real number.

In advanced mathematics, the dyadic rational numbers are central to the constructions of the dyadic solenoid, Minkowski's question-mark function, Daubechies wavelets, Thompson's group, Prüfer 2-group, surreal numbers, and fusible numbers. These numbers are order-isomorphic to the rational numbers; they form a subsystem of the 2-adic numbers as well as of the reals, and can represent the fractional parts of 2-adic numbers. Functions from natural numbers to dyadic rationals have been used to formalize mathematical analysis in reverse mathematics. 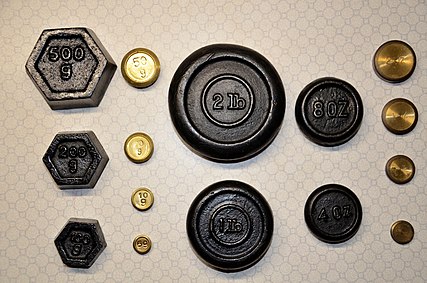 Many traditional systems of weights and measures are based on the idea of repeated halving, which produces dyadic rationals when measuring fractional amounts of units. The inch is customarily subdivided in dyadic rationals rather than using a decimal subdivision. [1] The customary divisions of the gallon into half-gallons, quarts, pints, and cups are also dyadic. [2] The ancient Egyptians used dyadic rationals in measurement, with denominators up to 64. [3] Similarly, systems of weights from the Indus Valley civilisation are for the most part based on repeated halving; anthropologist Heather M.-L. Miller writes that "halving is a relatively simple operation with beam balances, which is likely why so many weight systems of this time period used binary systems". [4]

Dyadic rationals are central to computer science as a type of fractional number that many computers can manipulate directly. [5] In particular, as a data type used by computers, floating-point numbers are often defined as integers multiplied by positive or negative powers of two. The numbers that can be represented precisely in a floating-point format, such as the IEEE floating-point datatypes, are called its representable numbers. For most floating-point representations, the representable numbers are a subset of the dyadic rationals. [6] The same is true for fixed-point datatypes, which also use powers of two implicitly in the majority of cases. [7] Because of the simplicity of computing with dyadic rationals, they are also used for exact real computing using interval arithmetic, [8] and are central to some theoretical models of computable numbers. [9] [10] [11]

Time signatures in Western musical notation traditionally are written in a form resembling fractions (for example: 2
2, 4
4, or 6
8), [13] although the horizontal line of the musical staff that separates the top and bottom number is usually omitted when writing the signature separately from its staff. As fractions they are generally dyadic, [14] although non-dyadic time signatures have also been used. [15] The numeric value of the signature, interpreted as a fraction, describes the length of a measure as a fraction of a whole note. Its numerator describes the number of beats per measure, and the denominator describes the length of each beat. [13] [14]

In theories of childhood development of the concept of a fraction based on the work of Jean Piaget, fractional numbers arising from halving and repeated halving are among the earliest forms of fractions to develop. [16] This stage of development of the concept of fractions has been called "algorithmic halving". [17] Addition and subtraction of these numbers can be performed in steps that only involve doubling, halving, adding, and subtracting integers. In contrast, addition and subtraction of more general fractions involves integer multiplication and factorization to reach a common denominator. Therefore, dyadic fractions can be easier for students to calculate with than more general fractions. [18]

is a power of two. [19] Another equivalent way of defining the dyadic rationals is that they are the real numbers that have a terminating binary representation. [9]

Dyadic rational approximations to the square root of 2 (

), found by rounding to the nearest smaller integer multiple of

The height of the pink region above each approximation is its error.

Real numbers with no unusually-accurate dyadic rational approximations. The red circles surround numbers that are approximated within error

. For numbers in the fractal Cantor set outside the circles, all dyadic rational approximations have larger errors.

Every real number can be arbitrarily closely approximated by dyadic rationals. In particular, for a real number

, consider the dyadic rationals of the form

can be any integer and

denotes the floor function that rounds its argument down to an integer. These numbers approximate

from below to within an error of

, which can be made arbitrarily small by choosing

to be arbitrarily large. For a fractal subset of the real numbers, this error bound is within a constant factor of optimal: for these numbers, there is no approximation

with error smaller than a constant times

. [23] [24] The existence of accurate dyadic approximations can be expressed by saying that the set of all dyadic rationals is dense in the real line. [22] More strongly, this set is uniformly dense, in the sense that the dyadic rationals with denominator

are uniformly spaced on the real line. [9]

, meaning that it can be generated by evaluating polynomials with integer coefficients, at the argument 1/2. [27] As a ring, the dyadic rationals are a subring of the rational numbers, and an overring of the integers. [28] Algebraically, this ring is the localization of the integers with respect to the set of powers of two. [29]

of the dyadic rationals by the integers) forms the Prüfer 2-group. [32]

Considering only the addition and subtraction operations of the dyadic rationals gives them the structure of an additive abelian group. Pontryagin duality is a method for understanding abelian groups by constructing dual groups, whose elements are characters of the original group, group homomorphisms to the multiplicative group of the complex numbers, with pointwise multiplication as the dual group operation. The dual group of the additive dyadic rationals, constructed in this way, can also be viewed as a topological group. It is called the dyadic solenoid, and is isomorphic to the topological product of the real numbers and 2-adic numbers, quotiented by the diagonal embedding of the dyadic rationals into this product. [30] It is an example of a protorus, a solenoid, and an indecomposable continuum. [33]

A Daubechies wavelet, showing points of non-smoothness at dyadic rationals

The dyadic rationals play a key role in the analysis of Daubechies wavelets, as the set of points where the scaling function of these wavelets is non-smooth. [26] Similarly, the dyadic rationals parameterize the discontinuities in the boundary between stable and unstable points in the parameter space of the Hénon map. [36]

The set of piecewise linear homeomorphisms from the unit interval to itself that have power-of-2 slopes and dyadic-rational breakpoints forms a group under the operation of function composition. This is Thompson's group, the first known example of an infinite but finitely presented simple group. [37] The same group can also be represented by an action on rooted binary trees, [38] or by an action on the dyadic rationals within the unit interval. [32]

In reverse mathematics, one way of constructing the real numbers is to represent them as functions from unary numbers to dyadic rationals, where the value of one of these functions for the argument

is a dyadic rational with denominator

that approximates the given real number. Defining real numbers in this way allows many of the basic results of mathematical analysis to be proven within a restricted theory of second-order arithmetic called "feasible analysis" (BTFA). [39]

The surreal numbers are generated by an iterated construction principle which starts by generating all finite dyadic rationals, and then goes on to create new and strange kinds of infinite, infinitesimal and other numbers. [40] This number system is foundational to combinatorial game theory, and dyadic rationals arise naturally in this theory as the set of values of certain combinatorial games. [41] [42] [19]

The fusible numbers are a subset of the dyadic rationals, the closure of the set

. They are well-ordered, with order type equal to the epsilon number

the smallest fusible number that is greater than

cannot be proven in Peano arithmetic, [43] and

grows so rapidly as a function of

The usual proof of Urysohn's lemma utilizes the dyadic fractions for constructing the separating function from the lemma.