From Wikipedia
https://en.wikipedia.org/wiki/Dodecahedron
Polyhedron with 12 faces
This article is about the three-dimensional shape. It is not to be confused with Roman dodecahedrons.

In geometry, a dodecahedron (Greek δωδεκάεδρον, from δώδεκα dōdeka "twelve" + ἕδρα hédra "base", "seat" or "face") or duodecahedron [1] is any polyhedron with twelve flat faces. The most familiar dodecahedron is the regular dodecahedron with regular pentagons as faces, which is a Platonic solid. There are also three regular star dodecahedra, which are constructed as stellations of the convex form. All of these have icosahedral symmetry, order 120.

Some dodecahedra have the same combinatorial structure as the regular dodecahedron (in terms of the graph formed by its vertices and edges), but their pentagonal faces are not regular: The pyritohedron, a common crystal form in pyrite, has pyritohedral symmetry, while the tetartoid has tetrahedral symmetry.

While the regular dodecahedron shares many features with other Platonic solids, one unique property of it is that one can start at a corner of the surface and draw an infinite number of straight lines across the figure that return to the original point without crossing over any other corner. [2]

The convex regular dodecahedron is one of the five regular Platonic solids and can be represented by its Schläfli symbol {5, 3}.

The dual polyhedron is the regular icosahedron {3, 5}, having five equilateral triangles around each vertex.

In crystallography, two important dodecahedra can occur as crystal forms in some symmetry classes of the cubic crystal system that are topologically equivalent to the regular dodecahedron but less symmetrical: the pyritohedron with pyritohedral symmetry, and the tetartoid with tetrahedral symmetry:

A pyritohedron is a dodecahedron with pyritohedral (Th) symmetry. Like the regular dodecahedron, it has twelve identical pentagonal faces, with three meeting in each of the 20 vertices (see figure). [3] However, the pentagons are not constrained to be regular, and the underlying atomic arrangement has no true fivefold symmetry axis. Its 30 edges are divided into two sets – containing 24 and 6 edges of the same length. The only axes of rotational symmetry are three mutually perpendicular twofold axes and four threefold axes.

Although regular dodecahedra do not exist in crystals, the pyritohedron form occurs in the crystals of the mineral pyrite, and it may be an inspiration for the discovery of the regular Platonic solid form. The true regular dodecahedron can occur as a shape for quasicrystals (such as holmium–magnesium–zinc quasicrystal) with icosahedral symmetry, which includes true fivefold rotation axes.

h is the height of the wedge-shaped "roof" above the faces of that cube with edge length 2.

An important case is h = 1/2 (a quarter of the cube edge length) for perfect natural pyrite (also the pyritohedron in the Weaire–Phelan structure).

Another one is h = 1/ φ = 0.618... for the regular dodecahedron. See section Geometric freedom for other cases.

Two pyritohedra with swapped nonzero coordinates are in dual positions to each other like the dodecahedra in the compound of two dodecahedra.

The pyritohedron has a geometric degree of freedom with limiting cases of a cubic convex hull at one limit of collinear edges, and a rhombic dodecahedron as the other limit as 6 edges are degenerated to length zero. The regular dodecahedron represents a special intermediate case where all edges and angles are equal.

It is possible to go past these limiting cases, creating concave or nonconvex pyritohedra. The endo-dodecahedron is concave and equilateral; it can tessellate space with the convex regular dodecahedron. Continuing from there in that direction, we pass through a degenerate case where twelve vertices coincide in the centre, and on to the regular great stellated dodecahedron where all edges and angles are equal again, and the faces have been distorted into regular pentagrams. On the other side, past the rhombic dodecahedron, we get a nonconvex equilateral dodecahedron with fish-shaped self-intersecting equilateral pentagonal faces.

A tetartoid (also tetragonal pentagonal dodecahedron, pentagon-tritetrahedron, and tetrahedric pentagon dodecahedron) is a dodecahedron with chiral tetrahedral symmetry (T). Like the regular dodecahedron, it has twelve identical pentagonal faces, with three meeting in each of the 20 vertices. However, the pentagons are not regular and the figure has no fivefold symmetry axes.

Although regular dodecahedra do not exist in crystals, the tetartoid form does. The name tetartoid comes from the Greek root for one-fourth because it has one fourth of full octahedral symmetry, and half of pyritohedral symmetry. [4] The mineral cobaltite can have this symmetry form. [5]

Abstractions sharing the solid's topology and symmetry can be created from the cube and the tetrahedron. In the cube each face is bisected by a slanted edge. In the tetrahedron each edge is trisected, and each of the new vertices connected to a face center. (In Conway polyhedron notation this is a gyro tetrahedron.)

The following points are vertices of a tetartoid pentagon under tetrahedral symmetry:

under the following conditions: [6]

The regular dodecahedron is a tetartoid with more than the required symmetry. The triakis tetrahedron is a degenerate case with 12 zero-length edges. (In terms of the colors used above this means, that the white vertices and green edges are absorbed by the green vertices.)

A lower symmetry form of the regular dodecahedron can be constructed as the dual of a polyhedra constructed from two triangular anticupola connected base-to-base, called a triangular gyrobianticupola. It has D3d symmetry, order 12. It has 2 sets of 3 identical pentagons on the top and bottom, connected 6 pentagons around the sides which alternate upwards and downwards. This form has a hexagonal cross-section and identical copies can be connected as a partial hexagonal honeycomb, but all vertices will not match. 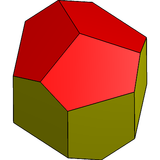 The rhombic dodecahedron can be seen as a degenerate pyritohedron where the 6 special edges have been reduced to zero length, reducing the pentagons into rhombic faces.

The rhombic dodecahedron has several stellations, the first of which is also a parallelohedral spacefiller.

Another important rhombic dodecahedron, the Bilinski dodecahedron, has twelve faces congruent to those of the rhombic triacontahedron, i.e. the diagonals are in the ratio of the golden ratio. It is also a zonohedron and was described by Bilinski in 1960. [7] This figure is another spacefiller, and can also occur in non-periodic spacefillings along with the rhombic triacontahedron, the rhombic icosahedron and rhombic hexahedra. [8]

There are 6,384,634 topologically distinct convex dodecahedra, excluding mirror images—the number of vertices ranges from 8 to 20. [9] (Two polyhedra are "topologically distinct" if they have intrinsically different arrangements of faces and vertices, such that it is impossible to distort one into the other simply by changing the lengths of edges or the angles between edges or faces.)

Armand Spitz used a dodecahedron as the "globe" equivalent for his Digital Dome planetarium projector. [10] based upon a suggestion from Albert Einstein.