From Wikipedia
https://en.wikipedia.org/wiki/Discoveries_of_exoplanets
Detecting planets located outside the Solar System
See also: List of exoplanet firsts and Lists of exoplanets

Number of extrasolar planet discoveries per year through April 2018, with colors indicating method of detection: 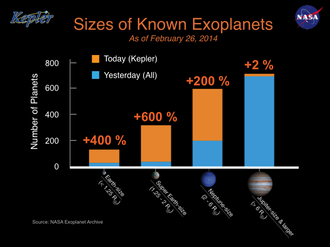 An exoplanet (extrasolar planet) is a planet located outside the Solar System. The first evidence of an exoplanet was noted as early as 1917, but was not recognized as such until 2016; no planet discovery has yet come from that evidence. [2] What turned out to be the first detection of an exoplanet was published among a list of possible candidates in 1988, though not confirmed until 2003. The first confirmed detection came in 1992, with the discovery of terrestrial-mass planets orbiting the pulsar PSR B1257+12. [3] The first confirmation of an exoplanet orbiting a main-sequence star was made in 1995, when a giant planet was found in a four-day orbit around the nearby star 51 Pegasi. Some exoplanets have been imaged directly by telescopes, but the vast majority have been detected through indirect methods, such as the transit method and the radial-velocity method. As of 1 May 2022, there are 5,017 confirmed exoplanets in 3,694 planetary systems, with 822 systems having more than one planet. [4] This is a list of the most notable discoveries.