From Wikipedia
(Redirected from Design firm)
https://en.wikipedia.org/wiki/Design_firm
Plan for the construction of an object or system
For other uses, see Design (disambiguation). 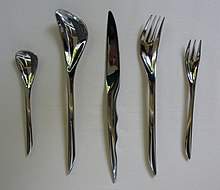 Cutlery designed by architect and designer Zaha Hadid (2007). The slightly oblique end part of the fork and the spoons, as well as the knife handle, are examples of designing for both aesthetic form and practical function.

A design is a plan or specification for the construction of an object or system or for the implementation of an activity or process or the result of that plan or specification in the form of a prototype, product, or process. The verb to design expresses the process of developing a design. In some cases, the direct construction of an object without an explicit prior plan (such as in craftwork, some engineering, coding, and graphic design) may also be considered to be a design activity. The design usually has to satisfy certain goals and constraints; may take into account aesthetic, functional, economic, or socio-political considerations; and is expected to interact with a certain environment. Typical examples of designs include architectural and engineering drawings, circuit diagrams, sewing patterns and less tangible artefacts such as business process models. [1]

People who produce designs are called designers. The term 'designer' generally refers to someone who works professionally in one of the various design areas. Within the professions, the word 'designer' is generally qualified by the area of practice (so one may be, for example, a fashion designer, a product designer, a web designer, or an interior designer), but it can also designate others such as architects and engineers (see below: Types of designing). A designer's sequence of activities to produce a design is called a design process, using design thinking and possibly design methods. The process of creating a design can be brief (a quick sketch) or lengthy and complicated, involving considerable research, negotiation, reflection, modeling, interactive adjustment, and re-design.

Designing is also a widespread activity outside of the professions, done by more people than just those formally recognised as designers. In his influential book The Sciences of the Artificial the interdisciplinary scientist Herbert A. Simon proposed that "Everyone designs who devises courses of action aimed at changing existing situations into preferred ones". [2] And according to the design researcher Nigel Cross "Everyone can – and does – design", and “Design ability is something that everyone has, to some extent, because it is embedded in our brains as a natural cognitive function”. [3]

Study of the history of design is complicated by varying interpretations of what constitutes ‘designing’. Many design historians, such as John Heskett, start with the Industrial Revolution and the development of mass production. [4] Others subscribe to conceptions of design that include pre-industrial objects and artefacts, beginning their narratives of design in prehistorical times. [5] Originally situated within art history, the historical development of the discipline of design history coalesced in the 1970s, as interested academics worked to recognize design as a separate and legitimate target for historical research. [6] Early influential design historians include German-British art historian Nikolaus Pevsner and Swiss historian and architecture critic Sigfried Giedion.

Institutions for design education date back to the nineteenth century. The Norwegian National Academy of Craft and Art Industry was founded in 1818, followed by the United Kingdom's Government School of Design (1837), Konstfack in Sweden (1844), and Rhode Island School of Design in the United States (1877). The German art and design school Bauhaus, founded in 1919, greatly influenced modern design education. [7]

Design education covers the teaching of theory, knowledge and values in the design of products, services and environments, and focusses on the development of both particular and general skills for designing. It is primarily orientated to preparing students for professional design practice, and based around project work and studio or atelier teaching methods.

There are also broader forms of higher education in design studies and design thinking, and design also features as a part of general education, for example within Design and Technology. The development of design in general education in the 1970s led to a need to identify fundamental aspects of ‘designerly’ ways of knowing, thinking and acting, and hence to the establishment of design as a distinct discipline of study. [8]

Substantial disagreement exists concerning how designers in many fields, whether amateur or professional, alone or in teams, produce designs. [9] Design researchers Dorst and Dijkhuis acknowledge that "there are many ways of describing design processes", and compare and contrast two dominant but different views of the design process: as a rational problem solving process and as a process of reflection-in-action. They suggested that these two paradigms "represent two fundamentally different ways of looking at the world – positivism and constructionism". [10] The paradigms may reflect differing views of how designing should be done and how it actually is done, and they both have a variety of names. The problem-solving view has been called "the rational model", [11] "technical rationality" [12] and "the reason-centric perspective". [13] The alternative view has been called "reflection-in-action", [12] "co-evolution", [14] and "the action-centric perspective". [13]

The rational model was independently developed by Herbert A. Simon, [15] [16] an American scientist, and two German engineering design theorists, Gerhard Pahl and Wolfgang Beitz. [17] It posits that:

Typical stages consistent with the rational model include the following: [22]

Each stage has many associated best practices. [24]

Criticism of the rational model

The rational model has been widely criticized on two primary grounds:

The action-centric perspective is a label given to a collection of interrelated concepts, which are antithetical to the rational model. [13] It posits that:

The action-centric perspective is based on an empiricist philosophy and broadly consistent with the agile approach [27] and methodical development. [28] Substantial empirical evidence supports the veracity of this perspective in describing the actions of real designers. [25] Like the rational model, the action-centric model sees design as informed by research and knowledge. [29]

At least two views of design activity are consistent with the action-centric perspective. Both involve these three basic activities:

The concept of the design cycle is understood as a circular time structure, [30] which may start with the thinking of an idea, then expressing it by the use of visual or verbal means of communication (design tools), the sharing and perceiving of the expressed idea, and finally starting a new cycle with the critical rethinking of the perceived idea. Anderson points out that this concept emphasizes the importance of the means of expression, which at the same time are means of perception of any design ideas. [31]

Philosophy of design is the study of definitions of design, and the assumptions, foundations, and implications of design. There are also many informal 'philosophies' for guiding design such as personal values or preferred approaches.

Some of these values and approaches include:

Relationship with the arts

The boundaries between art and design are blurry, largely due to a range of applications both for the term 'art' and the term 'design'. Applied arts can include industrial design, graphic design, fashion design, and the decorative arts which traditionally includes craft objects. In graphic arts (2D image making that ranges from photography to illustration), the distinction is often made between fine art and commercial art, based on the context within which the work is produced and how it is traded.