From Wikipedia, the free encyclopedia
Polyhedron made of equilateral triangles
Not to be confused with Deltohedron. 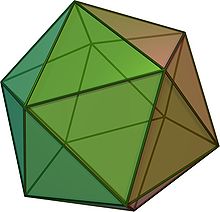 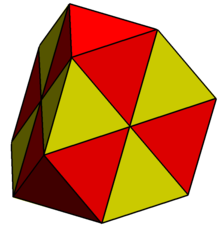 This is a truncated tetrahedron with hexagons subdivided into triangles. This figure is not a strictly-convex deltahedron since coplanar faces are not allowed within the definition.

In geometry, a deltahedron ( plural deltahedra) is a polyhedron whose faces are all equilateral triangles. The name is taken from the Greek upper case delta (Δ), which has the shape of an equilateral triangle. There are infinitely many deltahedra, all having an even number of faces by the handshaking lemma. Of these only eight are convex, having 4, 6, 8, 10, 12, 14, 16 and 20 faces. [1] The number of faces, edges, and vertices is listed below for each of the eight convex deltahedra.

There are only eight strictly-convex deltahedra: three are regular polyhedra, and five are Johnson solids. The three regular convex polyhedra are indeed Platonic solids.

Deltahedra retain their shape even if the edges are free to rotate around their vertices so that the angles between edges are fluid. Not all polyhedra have this property: for example, if you relax some of the angles of a cube, the cube can be deformed into a non-right square prism.

There is no 18-faced convex deltahedron. [2] However, the edge-contracted icosahedron gives an example of an octadecahedron that can either be made convex with 18 irregular triangular faces, or made with equilateral triangles that include two coplanar sets of three triangles.

There are infinitely many cases with coplanar triangles, allowing for sections of the infinite triangular tilings. If the sets of coplanar triangles are considered a single face, a smaller set of faces, edges, and vertices can be counted. The coplanar triangular faces can be merged into rhombic, trapezoidal, hexagonal, or other equilateral polygon faces. Each face must be a convex polyiamond such as

Some smaller examples include:

There are an infinite number of nonconvex forms.

Other nonconvex deltahedra can be generated by adding equilateral pyramids to the faces of all 5 Platonic solids:

Other augmentations of the tetrahedron include: