Death in Venice ( Italian: Morte a Venezia) is a 1971 historical drama film directed and produced by Italian filmmaker Luchino Visconti, adapted by Visconti and Nicola Badalucco from the 1912 novella of the same name by German author Thomas Mann. It stars Dirk Bogarde as Gustav von Aschenbach and Björn Andrésen as Tadzio, with supporting roles played by Mark Burns, Marisa Berenson and Silvana Mangano. It was filmed in Technicolor by Pasqualino De Santis, with a soundtrack featuring classical composers such as Gustav Mahler, Ludwig van Beethoven and Modest Mussorgsky. It is the second part of Visconti's thematic "German Trilogy"—preceded by The Damned (1969) and followed by Ludwig (1973).

The film premiered in London on 1 March 1971, and was entered into the 1971 Cannes Film Festival. It received positive reviews from critics and won several accolades, including BAFTA Awards for Best Cinematography, Best Production Design, Best Costume Design, and Best Sound. It was nominated for Best Film, Best Direction, and Best Actor in a Leading Role for Dirk Bogarde. Visconti won the David di Donatello for Best Director.

At the turn of the century, composer Gustav von Aschenbach travels to Venice for rest, due to serious health concerns. In Venice, he becomes obsessed with the stunning beauty of an adolescent Polish boy named Tadzio, who is staying with his family at the same Grand Hôtel des Bains on the Lido as Aschenbach.

While Aschenbach attempts to find peace and quiet, the rest of the city is gripped by a cholera epidemic. City authorities do not inform the holiday-makers of the problem, for fear that they will abandon Venice and leave; however, Aschenbach himself is dying from heart disease. Aschenbach suddenly decides to depart from Venice, but his trunk has left the train station without him. In a moment of impulse, he decides to stay longer, waiting until his trunk has been returned; in fact, he is happy to return to the Grand Hôtel des Bains. Aschenbach continues to observe Tadzio whenever possible, even following him and his family through the narrow streets of Venice. Aschenbach soon realizes that something is seriously wrong, as a disinfectant wash is being applied to public places within the city. Later, when Aschenbach questions the hotel manager about it, the manager downplays the epidemic as nothing of concern.

Later, rejuvenated by the continuing presence of Tadzio – though they never actually converse – he visits a barber who, in his words, ".....will restore what belongs to you immediately", dyeing his grey hair black and whitening his face and reddening his lips to try to make him look younger. As he leaves the barber's shop the barber exclaims: "And now the signore may fall in love as soon as he pleases". Once again, Aschenbach follows Tadzio and his family through the tiny streets of Venice, gazing at Tadzio from afar, the latter becoming more aware that he is being gazed upon. Later that evening, Aschenbach dreams that he is conducting a work of his which is received with jeers and boos from an angry crowd.

In the climactic scene, Aschenbach sees Tadzio being beaten up on the beach by an older boy. When released, Tadzio walks away from him alone towards the horizon. He suddenly turns back to look at Aschenbach, then turns away to face the sun, and stretches his arm out towards it. Aschenbach too, stretches his hand as if to reach Tadzio, and at that very moment—heightened by the crescendo in Mahler's Adagietto—he dies from a heart attack. A few people notice him collapsed on his chair and alert the hotel staff. They carry Aschenbach's body away.

While the character Aschenbach in the novella is an author, Visconti changed his profession from writer to composer. This allows the musical score, in particular the Adagietto from the Fifth Symphony by Gustav Mahler, which opens and closes the film, and sections from Mahler's Third Symphony, to represent Aschenbach's writing. Apart from this change, the film is relatively faithful to the book, but with added scenes where Aschenbach and a musician friend debate the degraded aesthetics of his music. 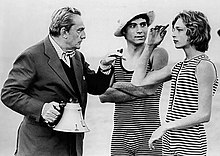 In the second volume of his autobiography, Snakes and Ladders, Bogarde recounts how the film crew created his character's deathly white skin for the final scenes of the film, just as he dies. The makeup department tried various face paints and creams, none of which were satisfactory, as they smeared. When a suitable cream was found and the scenes were shot, Bogarde recalls that his face began to burn terribly. The tube of cream was found and written on the side was "Keep away from eyes and skin": the director had ignored this and had been testing it out, as small patches, on various members of the film crew, before finally having it applied to Bogarde's face.

In another volume of his memoirs, An Orderly Man, Dirk Bogarde relates that, after the finished film was screened for them by Visconti in Los Angeles, the Warner Bros. executives wanted to write off the project, fearing it would be banned in the United States for obscenity because of its subject matter. They eventually relented when a gala premiere of Death in Venice was organized in London, with Elizabeth II and Princess Anne attending, to gather funds for the sinking Italian city.

In 2003, Andrésen gave an interview to The Guardian in which he expressed his dislike of the fame Death in Venice brought him and how he sought to distance himself from the objectifying image he acquired from playing Tadzio. [7] He stated that he now disapproves of the film's subject matter: "Adult love for adolescents is something that I am against in principle. Emotionally perhaps, and intellectually, I am disturbed by it – because I have some insight into what this kind of love is about." He also recounted attending the film's premiere at the Cannes Film Festival: "I was just 16 and Visconti and the team took me to a gay nightclub. Almost all the crew were gay. The waiters at the club made me feel very uncomfortable. They looked at me uncompromisingly as if I was a nice meaty dish...it was the first of many such encounters."

In 2021, Juno Films released The Most Beautiful Boy in the World, a tell-all documentary in which Andrésen recollects the years of predatory and pedophilic behavior he received from the cast, crew, and fans of the film. [8]

The film's score was performed by the Orchestra dell'Accademia de Santa Cecilia, conducted by Franco Mannino, and subsequently released by EMI. In addition to the music of Gustav Mahler's Third and Fifth Symphonies, which embodied the character and suffering of Aschenbach, Visconti included a number of pieces from other composers. Although overshadowed as they are by the dominance of Mahler, they play an important part in the film's narrative. One is the ballad by Armando Gil, sung by the strolling player, Chi con le donne vole aver fortuna (He who wants to be successful with the ladies). Another is Beethoven's famous piano piece " Für Elise", played by Claudio Gizzi. The third, which is particularly evocative, is Modest Mussorgsky's "Lullaby", which, in the film, heralds Ashenbach's death. It is sung by Mascia Predit, an unforgettable soprano whom Visconti was happily surprised to discover among the extras when filming the last scene.

On review aggregator website Rotten Tomatoes, the film has an approval rating of 70% based on 27 reviews, with an average rating of 7.1/10. The website's critics consensus reads, "Luchino Visconti's Death in Venice is one of his emptier meditations on beauty, but fans of the director will find his knack for sumptuous visuals remains intact." [9]

Derek Malcolm, in his 1971 review for The Guardian wrote, "It is a very slow, precise, and beautiful film, ... an immensely formidable achievement, engrossing in spite of any doubts." [10]

Film historian Lawrence J. Quirk wrote in his study The Great Romantic Films (1974): "Some shots of Björn Andrésen, the Tadzio of the film, could be extracted from the frame and hung on the walls of the Louvre or the Vatican in Rome." He says Andrésen did not represent just a pretty youngster as an object of perverted lust, but that novelist Mann and director-screenwriter Visconti intended him as a symbol of beauty in the realm of Michelangelo's David or Leonardo da Vinci's Mona Lisa, the beauty that moved Dante to "seek ultimate aesthetic catharsis in the distant figure of Beatrice." [11]

In his 2003 review for The Guardian, Peter Bradshaw hailed Dirk Bogarde's performance as one of the greatest of all time, concluding "This is exalted film-making." [12]

On September 1, 2018, the film was screened in the Venice Classics section at the 75th Venice International Film Festival. [14] The film was released by the Criterion Collection featuring a remastered edition on Blu-Ray on February 19, 2019. [15]

On January 29, 2021, a documentary about Björn Andrésen, The Most Beautiful Boy in the World, premiered at the Sundance Film Festival. [16]