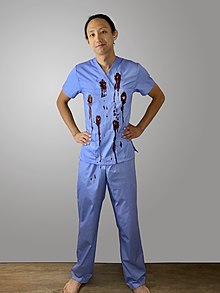 Bullet hit squibs on an actor wearing a set of scrubs that have been fired, revealing bullet holes and spilling out fake blood.

Dead-character costumes are modified stage clothes worn by actors whose characters are killed off in movies and theatre productions. [1] Usually, several identical sets of these costumes are prepared for the scene. As such, spent costumes cannot be reused and end up on the "dead-character rack". They are kept for a period of time until the end of production, after which they can be auctioned, repaired and/or donated.

The simulation of an actor getting shot in movies or theatre productions involves using a bullet hit squib device that bursts out a small packet of fake blood hidden beneath the costume. In most cases, the effect is carried out with clothing to conceal the device, where bullet holes on the fabric are precut before attaching the squibs. Typically, at least three sets of identical clothing, sometimes even six, [2] are used for the stunt. [3] At least one hero piece (used in prior scenes and closeups without squibs) and several more stunt pieces (with squibs and prescored bullet holes) are prepared for the planned number of takes, dress rehearsals, backups and tests. Consideration should also be given to the colour of the outfit (sufficiently bright) and/or the set lighting to show the bloodstains. [4]

Preparation of the costume

The number, sequence and locations of bullet holes (~50 mm large) are first determined. Bullet holes on the clothing's fabric must first be weakened (by law) by cutting, [5] sanding, [2] scoring, [6] grating [7] or plunging a scoring tool, [8] after which they are loosely glued or taped back together so from a distance, the fabric appears intact. If the fabric is not completely cut, the blast from the squib should create a frayed rip through the weakened area, but must be verified on a trial set of the costume (or at an area of the costume not visible to the camera, if the budget is limited). [9]

Because of the size and weight of the entire bullet hit squib assembly (~50 mm diameter, ~15 mm thick, weighing ~30 g), depending on the weight and thickness of the clothing fabric, it is either sewn [2] or taped directly to the inside of the outfit, [10] allowing the fake blood to be propelled out of the bullet hole instead of running down the inside of the costume. Any inner lining and filling present are removed to access the site and to reduce the overall thickness and bulge. [11] A well-made, low-profile bullet hit squib device should not be too conspicuous beneath the costume, neither should the pre-scoring of the fabric, as shown in the gallery figures. In any case, bullet holes that are visible on the fabric in the gunshot scene immediately before the squibs explode can also be erased during post-production. [12] [13]

On jackets with multiple frontal squibs, the costumer may install an additional zip at the back to allow the actor to slip on the jacket without needing to disturb the squibs. [14] The costumer should also ensure that all zips and buttons are fastened for visual and safety purposes to prevent recoil to prevent the bullet hit squibs from being revealed and/or aiming at unintended directions.

Most types of clothing are used once per take, thereby requiring a significant wardrobe budget especially for films and where many characters are shot. However, some types of clothing can be reused. Fake blood can be wiped off waterproof jackets, parkas and down jackets for a new take between takes, as long as the bullet holes are cleanly cut beforehand. This is especially beneficial for actors in stage productions who then wear the same piece for each show, and extras who fill multiple roles. Moreover, using dry simulants like dust, or down feathers (for the desired gunshot aesthetic on a down jacket), or non-staining simulants like water [15] instead of fake blood for dress rehearsals eliminates the potential for staining.

The advantages include reducing the number of replicates needed (to 1x hero and 1x stunt piece). A jacket also provides a more sophisticated aesthetic and higher budget appearance than compared to, e.g. a t-shirt. On the other hand, one jacket may cost more than several shirts, extra time is needed between takes to remove the spent squibs and reinstalling new ones and depending on the outfit, more complicated preparation may be needed. Down jackets for instance, requires the filling to be repacked in a custom-made 'pocket' made with the same downproof taffeta lining material to preserve the down feathers and to retain the quilted puffer appearance.

If the costumes cannot be modified or damaged at all, blood stains can be convincingly simulated with painted nylon tulle mesh with an acrylic top coat. [16] Ripped fabric portraying a bullet hole can also thus be built on top of the mesh. The advantage is that the stains can be repositioned before being sewn onto the fabric for the production and removed afterwards, effectively enabling the costume to be reused without damage or staining. The disadvantage is that it cannot portray the blood spray effect with a bullet hit squib, so CGI may be needed to simulate this effect.

The squibs are connected to a trigger operable by the actor or a crew member, [2] a power source (e.g. battery) and sometimes also a programmable controller to sync with multiple squibs. The prepared stunt costume is significantly heavier and bulkier than the hero version, and care should be taken when donning the costume not to loosen the attached squibs. The actor can change into the prepared outfit immediately prior to the shot (if hero and stunt pieces are available), wear it throughout a scene (e.g. in stage productions) or even the entire day, [4] although a two-step ignition procedure should be used to avoid accidental triggering. [5]

Spent and unspent costumes are kept until post-production is completed, in case extra footage is required. [17] Afterwards, spent costumes can be kept as souvenir, auctioned as memorabilia, repaired or donated, especially with high quality winter coats. [1]