From Wikipedia
https://en.wikipedia.org/wiki/Cylinder_seal
Form of seal used in ancient times to roll an impression onto a two-dimensional surface 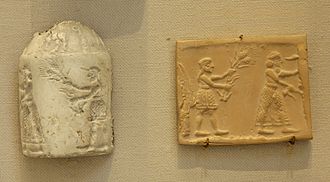 Cylinder-seal of the Uruk period and its impression, c.3100 BC. Louvre Museum.

Cylinder seal of First Dynasty of Ur Queen Puabi, found in her tomb, dated circa 2600 BC, with modern impression. Inscription 𒅤𒀀𒉿 𒊩𒌆Pu-A-Bi- Nin "Queen Puabi". [1] [2] [3] 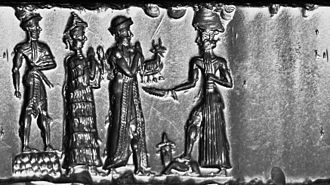 A cylinder seal is a small round cylinder, typically about one inch (2 to 3 cm) in length, engraved with written characters or figurative scenes or both, used in ancient times to roll an impression onto a two-dimensional surface, generally wet clay. According to some sources, cylinder seals were invented around 3500 BC in the Near East, at the contemporary sites of Uruk in southern Mesopotamia and slightly later at Susa in south-western Iran during the Proto-Elamite period, and they follow the development of stamp seals in the Halaf culture or slightly earlier. [4] They are linked to the invention of the latter's cuneiform writing on clay tablets. [5] [6] Other sources, however, date the earliest cylinder seals to a much earlier time, to the Late Neolithic period (7600-6000 BC), hundreds of years before the invention of writing. [7] [8]

Cylinder seals are a form of impression seal, a category which includes the stamp seal and finger ring seal. They survive in fairly large numbers and are important as art, especially in the Babylonian and earlier Assyrian periods. Impressions into a soft material can be taken without risk of damage to the seal, and they are often displayed in museums together with a modern impression on a small strip.

The cylinder seals themselves are typically made from hardstones, and some are a form of engraved gem. They may also use glass or ceramics, like Egyptian faience. Many varieties of material such as hematite, obsidian, steatite, amethyst, lapis lazuli and carnelian were used to make cylinder seals. As the alluvial country of Mesopotamia lacks good stone for carving, the large stones of early cylinders were imported probably from Iran. [9] Most seals have a hole running through the centre of the body, and they are thought to have typically been worn on a necklace to be always available when needed.

Size comparison of seals, with their impression strips
(modern/current impressions)

Cylinder seals were used as an administrative tool, a form of signature, as well as jewelry and as magical amulets; [10] later versions would employ notations with Mesopotamian cuneiform. In later periods, they were used to notarize or attest to multiple impressions of clay documents. Graves and other sites housing precious items such as gold, silver, beads, and gemstones often included one or two cylinder seals, as honorific grave goods.

Cylinder seal impressions were made on a variety of surfaces:

This cylinder seal from Cyprus shows two nude female figures. Each holds a flower, a symbol of fertility. [11] The Walters Art Museum.

The images depicted on cylinder seals were mostly theme-driven and often sociological or religious. Instead of addressing the authority of the seal, a better study may be of the thematic nature of the seals, since they presented the ideas of the society in pictographic and text form. In a famous cylinder depicting Darius I of Persia: he is aiming his drawn bow at an upright enraged lion impaled by two arrows, while his chariot horse is trampling a dead lion. The scene is framed between two slim palm trees and a block of cuneiform text and, above the scene, the Faravahar symbol of Ahura Mazda, the god representation of Zoroastrianism.

The reference below, Garbini, covers many of the following categories of cylinder seal. Dominique Collon's book First Impressions, which is dedicated to the topic, has over 1000 illustrations.

A categorization of cylinder seals:

A roll-out of the San Andres ceramic cylinder seal containing what has been proposed as evidence of the earliest writing system in Mesoamerica. This cylinder seal is dated to approximately 650 BC and is unrelated to the Mesopotamian cylinder seals.