From Wikipedia
https://en.wikipedia.org/wiki/Crossing_number_(graph_theory)
Fewest edge crossings in drawing of a graph 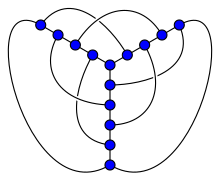 A drawing of the Heawood graph with three crossings. This is the minimum number of crossings among all drawings of this graph, so the graph has crossing number cr(G) = 3.

In graph theory, the crossing number cr(G) of a graph G is the lowest number of edge crossings of a plane drawing of the graph G. For instance, a graph is planar if and only if its crossing number is zero. Determining the crossing number continues to be of great importance in graph drawing, as user studies have shown that drawing graphs with few crossings makes it easier for people to understand the drawing. [1]

The study of crossing numbers originated in Turán's brick factory problem, in which Pál Turán asked for a factory plan that minimized the number of crossings between tracks connecting brick kilns to storage sites. Mathematically, this problem can be formalized as asking for the crossing number of a complete bipartite graph. [2] The same problem arose independently in sociology at approximately the same time, in connection with the construction of sociograms. [3] Turán's conjectured formula for the crossing numbers of complete bipartite graphs remains unproven, as does an analogous formula for the complete graphs.

For the purposes of defining the crossing number, a drawing of an undirected graph is a mapping from the vertices of the graph to disjoint points in the plane, and from the edges of the graph to curves connecting their two endpoints. No vertex should be mapped onto an edge that it is not an endpoint of, and whenever two edges have curves that intersect (other than at a shared endpoint) their intersections should form a finite set of proper crossings, where the two curves are transverse. A crossing is counted separately for each of these crossing points, for each pair of edges that cross. The crossing number of a graph is then the minimum, over all such drawings, of the number of crossings in a drawing. [5]

Some authors add more constraints to the definition of a drawing, for instance that each pair of edges have at most one intersection point (a shared endpoint or crossing). For the crossing number as defined above, these constraints make no difference, because a crossing-minimal drawing cannot have edges with multiple intersection points. If two edges with a shared endpoint cross, the drawing can be changed locally at the crossing point, leaving the rest of the drawing unchanged, to produce a different drawing with one fewer crossing. And similarly, if two edges cross two or more times, the drawing can be changed locally at two crossing points to make a different drawing with two fewer crossings. However, these constraints are relevant for variant definitions of the crossing number that, for instance, count only the numbers of pairs of edges that cross rather than the number of crossings. [5] 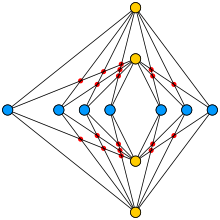 During World War II, Hungarian mathematician Pál Turán was forced to work in a brick factory, pushing wagon loads of bricks from kilns to storage sites. The factory had tracks from each kiln to each storage site, and the wagons were harder to push at the points where tracks crossed each other, from which Turán was led to ask his brick factory problem: how can the kilns, storage sites, and tracks be arranged to minimize the total number of crossings? Mathematically, the kilns and storage sites can be formalized as the vertices of a complete bipartite graph, with the tracks as its edges. A factory layout can be represented as a drawing of this graph, so the problem becomes: what is the minimum possible number of crossings in a drawing of a complete bipartite graph? [7]

Kazimierz Zarankiewicz attempted to solve Turán's brick factory problem; [8] his proof contained an error, but he established a valid upper bound of

The problem of determining the crossing number of the complete graph was first posed by Anthony Hill, and appeared in print in 1960. [10] Hill and his collaborator John Ernest were two constructionist artists fascinated by mathematics. They not only formulated this problem but also originated a conjectural formula for this crossing number, which Richard K. Guy published in 1960. [10] Namely, it is known that there always exists a drawing with

Saaty further verified that this formula gives the optimal number of crossings for p ≤ 10 and Pan and Richter showed that it also is optimal for p = 11, 12. [12]

In general, determining the crossing number of a graph is hard; Garey and Johnson showed in 1983 that it is an NP-hard problem. [18] In fact the problem remains NP-hard even when restricted to cubic graphs [19] and to near-planar graphs (graphs that become planar after removal of a single edge). [20] A closely related problem, determining the rectilinear crossing number, is complete for the existential theory of the reals. [21]

On the positive side, there are efficient algorithms for determining whether the crossing number is less than a fixed constant k. In other words, the problem is fixed-parameter tractable. [22] [23] It remains difficult for larger k, such as k = |V|/2. There are also efficient approximation algorithms for approximating cr(G) on graphs of bounded degree. [24] In practice heuristic algorithms are used, such as the simple algorithm which starts with no edges and continually adds each new edge in a way that produces the fewest additional crossings possible. These algorithms are used in the Rectilinear Crossing Number distributed computing project. [25]

The motivation of Leighton in studying crossing numbers was for applications to VLSI design in theoretical computer science. [27] Later, Székely also realized that this inequality yielded very simple proofs of some important theorems in incidence geometry, such as Beck's theorem and the Szemerédi-Trotter theorem, [29] and Tamal Dey used it to prove upper bounds on geometric k-sets. [30]

If edges are required to be drawn as straight line segments, rather than arbitrary curves, then some graphs need more crossings. The rectilinear crossing number is defined to be the minimum number of crossings of a drawing of this type. It is always at least as large as the crossing number, and is larger for some graphs. The rectilinear crossing numbers for K5 through K12 are 1, 3, 9, 19, 36, 62, 102, 153, ( A014540) and values up to K27 are known, with K28 requiring either 7233 or 7234 crossings. Further values are collected by the Rectilinear Crossing Number project. [25]