An IUCN Red List Critically Endangered (CR) species is one that has been categorized by the International Union for Conservation of Nature as facing an extremely high risk of extinction in the wild. [1] As of 2021, of the 120,372 species currently tracked by the IUCN, there are 8,404 species that are considered to be Critically Endangered. [2]

The IUCN Red List provides the public with information regarding the conservation status of animal, fungi, and plant species. [3] It divides various species into seven different categories of conservation that are based on habitat range, population size, habitat, threats, etc. Each category representing a different level of global extinction risk. Species that are considered to be Critically Endangered are placed within the "threatened" category. [4]

As the IUCN Red List does not consider a species extinct until extensive, targeted surveys have been conducted, species that are possibly extinct are still listed as Critically Endangered. IUCN maintains a list [5] of "possibly extinct" and "possibly extinct in the wild" species, modelled on categories used by BirdLife International to categorize these taxa.

To be defined as Critically Endangered in the Red List, a species must meet any of the following criteria (A–E) ("3G/10Y" signifies three generations or ten years—whichever is longer—over a maximum of 100 years; "MI" signifies Mature Individuals): [6]

B: Reduction Across a Geographic Range 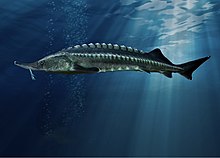 The Beluga sturgeon ( Huso huso) is an example of a critically endangered species. Their wild populations have been reduced due to overharvesting for its caviar.

The current extinction crisis is witnessing extinction rates that are occurring at a faster rate than that of the natural extinction rate. It has largely been credited towards human impacts on climate change and the loss of biodiversity. This is along with natural forces that may create stress on the species or cause an animal population to become extinct. [7]

One of the most significant reasons animals and plants become critically endangered is due to loss of habitat. Species rely on their habitat for the resources needed for their survival. If the habitat becomes destroyed, the population will see a decline in their numbers. Activities that cause loss of habitat include pollution, urbanization, and agriculture. Another reason for plants and animals to become endangered is due to the introduction of invasive species. Invasive species invade and exploit a new habitat for its natural resources as a method to outcompete the native organisms, eventually taking over the habitat. This can lead to either the native species' extinction or causing them to become endangered, which also eventually causes extinction. Plants and animals may also go extinct due to disease. The introduction of a disease into a new habitat can cause it to spread amongst the native species. Due to their lack of familiarity with the disease or little resistance, the native species can die off.