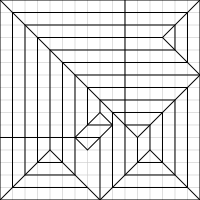 Crease pattern for a swordsman

A crease pattern is an origami diagram that consists of all or most of the creases in the final model, rendered into one image. This is useful for diagramming complex and super-complex models, where the model is often not simple enough to diagram efficiently.

Although not intended as a substitute for diagrams, folding from crease patterns is starting to gain in popularity, partly because of the challenge of being able to 'crack' the pattern, and also partly because the crease pattern is often the only resource available to fold a given model, should the designer choose not to produce diagrams. For example, an algorithm for the automatic development of crease patterns for certain polyhedra with discrete rotational symmetry by composing right frusta has been implemented via a CAD program. [1] The program allows users to specify a target polyhedron and generate a crease pattern that folds into it. Still, there are many cases in which designers wish to sequence the steps of their models but lack the means to design clear diagrams. Such origamists occasionally resort to the sequenced crease pattern (SCP) which is a set of crease patterns showing the creases up to each respective fold. The SCP eliminates the need for diagramming programs or artistic ability while maintaining the step-by-step process for other folders to see. Another name for the sequenced crease pattern is the progressive crease pattern (PCP).